Where is Lightning Ridge?

Lightning Ridge is a town in northern central NSW near the Queensland border. The area around Lightning Ridge has long been inhabited by the Gamilaraay and Yuwaalaraay people. The town is about 700 km North-West of Sydney or alternatively it is roughly 250 km West of Moree.

Why is Lightning Ridge important?

The town of Lightning Ridge, population of just over 2000, is famous for its abundance of opal considered Australia’s “national gemstone”. In its precious form, opal has a bright colourful appearance created by microscopic spheres of silica which interfere with light as it reflects off the gems surface. In particular, the Lightning Ridge region has yielded relatively large amounts of black opal, a rare form of opal which has a dark, black base, rather than the more common white colour. This highly valued geological spectacle has been actively mined and fossicked in the region since the early 20th century. Fossil material recovered from the region is often uncovered by miners or by palaeontologists granted special permission to sift through pre-excavated opal mining tailing heaps.

Incredibly, all of the vertebrate, invertebrate and plant fossil material found at Lightning Ridge has been opalised, creating a beautiful and relatively unique snapshot of prehistoric life. While fossil material from the site is often quite fragmented and rare, the region has still produced an impressive diversity of flora and fauna. For example, the areas has yielded the only dinosaur material known from NSW and some of Australia’s very few Mesozoic mammals (mammals from the time of the dinosaurs). 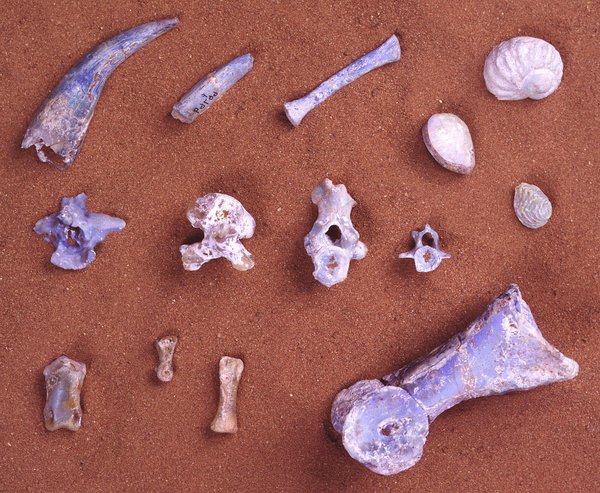 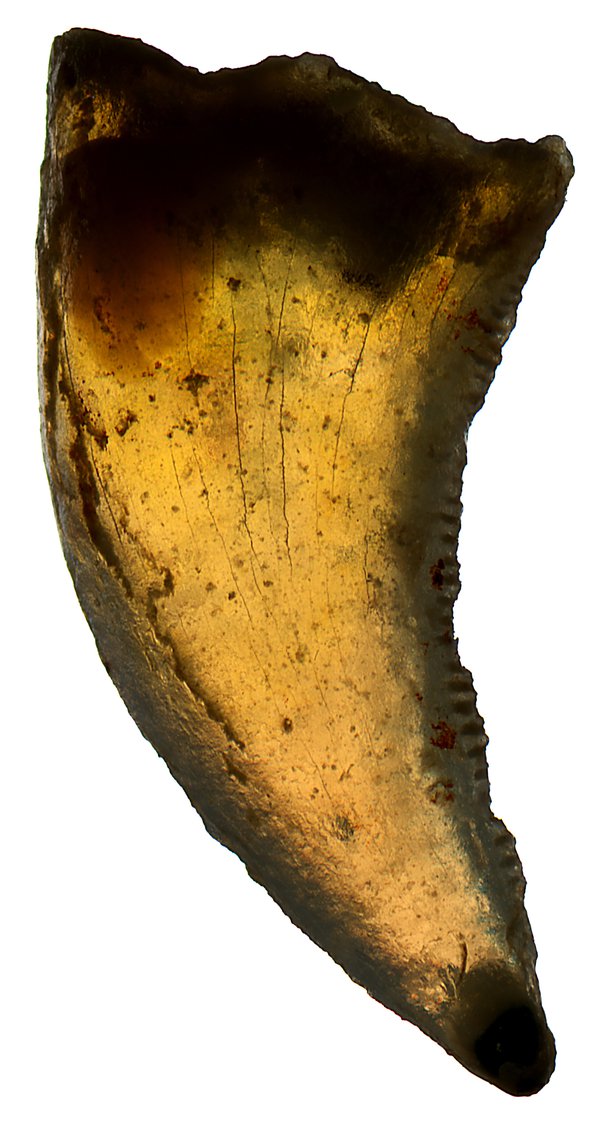 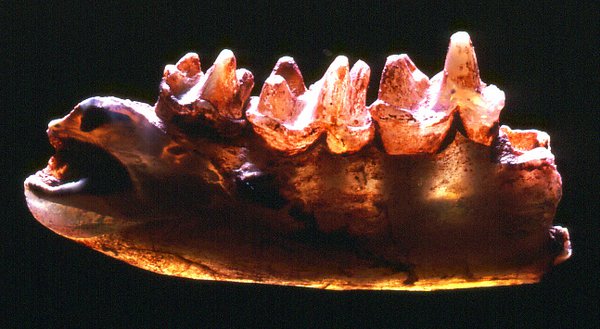 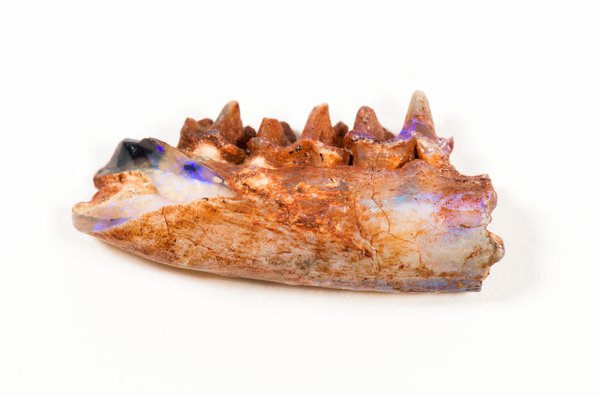 The fossiliferous layers at Lighting Ridge are thought to belong to an extensive geological unit called the Griman Creek Formation which extends all the way into Queensland. This sequence of rock ranges in age from 96 to 110 million years old. Australia, at that time, would have still been attached to Antarctica and resided much farther South, within the modern Antarctic Circle. Lightning Ridge would have been relatively cool, like modern day New Zealand in terms of temperature. The land would have been dominated by dinosaurs while mammals were small and rare. Marine reptiles occupied many of the niches filled by marine mammals in modern oceans, while Pterosaurs rather than birds ruled the skies. We also know from fossils that many groups were present occupying similar niches to those that they fill today such as bivalves, gastropods, sharks, frogs and turtles. Based on the geology and fossils found at the site, Lightning Ridge is thought to represent a freshwater inlet into the Eromanga Sea, skirted by a conifer forest.

A wide range of fossil dinosaur material has been found in the region, ranging from the bones of from large herbivorous sauropods and through to fearsome theropods. In just the last five years palaeontologists have described several new theropods from Lightning Ridge including representatives from the megaraptorid, carchardodontosaurid and noasaurid groups. Species amongst these groups can range from terrifying large robust predators to relatively small and agile omnivores.

This sharp, dagger like theropod tooth has a serrated back edge which is clearly well adapted for puncturing and tearing at flesh.

This rather gracile theropod vertebra has been preserved in an almost porcelaneous purple opal, making for a particularly beautiful dinosaur specimen.

Again, this theropod phalanx – a bone from the foot – provides a dazzling example of opalization.

The positioning of the ilium and the ischium bones in the pelvis is a key trait used to differentiate the two branches of Dinosauria; the Saurischia and the Ornithischia. While the theropods fall on the saurichian branch, this bone is the ischium of a large herbivorous ornithischian likely from an ornithopod.

Steropodon galmani and Kollikodon ritchiei are two early mammals known from the Mesozoic of Australia. The closest living relatives of these species are thought to be the egg laying mammals, or Monotremes, which includes the echidna and platypus. Despite the pronounced differences in their tooth structure, both specimens are quite similar in their preservation. Each is only known from small sections of jaw containing a few teeth, which measure less than a few centimetres. We can be sure these jaws came from mammals as dentition-based traits such as tooth cusp complexity and tooth differentiation are defining traits of the group.

In contrast to most placental mammals, the muzzles of living monotremes are specialized bill or beak like structures which (almost) lack teeth entirely. The exception being juvenile platypus and the “molar pads” of adult platypus. Therefore, S. galmani may provide insight into early commonalities between placental and monotreme mammals. As seen in the 3D scans, the specimen consists of three molars with high, pointy cusps preserved within a section of the jaw. The shape of these teeth would facilitate crushing and shearing and are similar to younger Cenozoic fossils of platypus which have bills with fewer, but still complex, teeth. It has also been noted that the relatively large canal running through the jaw on this specimen may suggest the presence of a bill with a similar structure to living and extinct platypuses.

On the other hand, the teeth of Kollikodon ritchiei are quite bizarre and unlike any other known mammal. The name Kollikodon is derived for the Greek word for a bread roll, in reference to the bread roll shape of the specimens molars. The shape of the teeth has also led to the species being referred to as ‘Hotcrossbunodon’. Sections of the upper tooth row have also since been uncovered which demonstrate equally peculiar bubble-like cusps. Together these teeth clearly provided smooth and robust platforms for grinding tough foods, rather than sharp, slicing blades for cutting up meat.

3D interactive model of a pleiosaur vertebrae (a)

3D interactive model of a pleiosaur vertebrae (b)

Here are some examples of plesiosaur vertebrae, the protrusions on which present a more complex boney structure than that of fish. Such complex vertebrae are just one line of evidence that these animals descended from an ancestor that once had to support its body weight while walking around on land.

When these lineages of reptiles returned to the ocean, their limbs evolved to became stout paddle-like structures. This was either the femur or humerus of one such large plesiosaur which has been fractured down the centre exposing bright green veins of opal running through its interior.

3D interactive model of a fragment of a turtle shell

Some lineages of extant marine reptiles were also present by this time, as demonstrated by this shell fragment and vertebrae from turtles, which would be very similar if we compared to those of living species.

A small fragment of the armour-like skin that would have protected Isisfordia from potentially deadly clashes with predators and prey alike.

A short section of an I. selaslophensis jaw showing several pointy teeth.

Similar to their modern counterparts these fossils are easily recognisable as clam (bivalve) shells. In particular, they provide a good example of the preservation of specimens in different forms of opal. Here we see the three-dimensional surface of the organism preserved in less precious “potch opal”, while chipped and broken sections expose the colourful, glassy opal which typically occurs on the interior of these fossils. 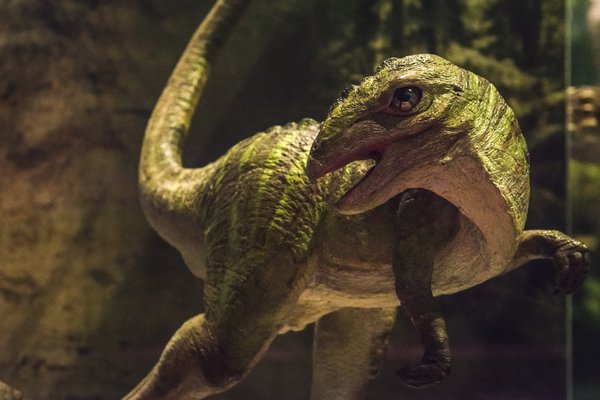 Qantassaurus intrepidus, named after the Australian airline Qantas, was a small ornithopod from the Early Cretaceous of Victoria.

Muttaburrasaurus was a large, plant-eating ornithopod from the Early Cretaceous of eastern Australia.

View illustrations and fossils of some of Australia's dinosaurs, including the most recent discoveries.

Fulgurotherium australe was a small ornithopod dinosaur from the Early Cretaceous of Australia. Fulgurotherium, known from Lightning Ridge in New South Wales and perhaps from Victoria, was one of the first Australian dinosaurs to be scientifically described.