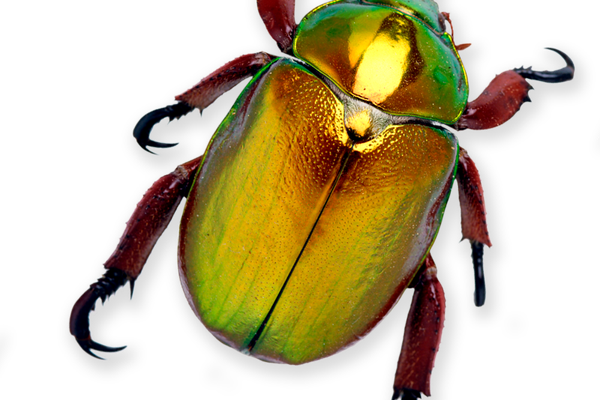 Why most animals are insects

In order to answer this question we must look at where insects fit in the animal kingdom. The animal kingdom is divided into several groups called phyla. An example of a phylum is the Chordata, which holds all the backboned animals. Insects belong to the phylum Arthropoda.

Arthropods are characterised by having the following features:

The Arthropoda is divided into a number of classes. These include the:

Insect are successful and important

The insects have proved to be the most successful arthropods. There are far more species in the class Insecta than in any other group of animals. These amazingly diverse animals have conquered all the environments on earth except for the frozen polar environments at the highest altitudes and in the immediate vicinity of active volcanoes.

Insects are the only invertebrates (animals without backbones) with wings. Much of their success results from their ability to fly and colonise new habitats. The study of insects is called entomology and entomologists are scientists who study insects.

Insects play a very important role in the web of life, in every environment. Some of their jobs include pollinating flowering plants, being a source of food for insectivorous animals and assisting in the decomposition of plants and animals.

Modern insect classification divides the Insecta into 29 orders, many of which have common names. Some of the more common orders are:

It is very difficult to provide a simple answer to the question: What external features characterise an insect? This is because the class Insecta is full of exceptions. It is not easy to produce a typical body plan for what most insects look like, but there are some very general features that most insects possess.

Together these features can help us distinguish insects from other arthropods.

Adaptation to flight proved a highly successful strategy and during the Permian period (285 - 245 million years ago) insects achieved their greatest diversity. No other arthropod group has achieved flight. By the Permian, the basic physical structure of many of the modern orders of insects had evolved.

The more recently evolved Hymenoptera (ants, bees, wasps and sawflies) and Lepidoptera (butterflies and moths) appear as fossils in the Jurassic period (210 - 145 million years ago). The Mantodea (praying mantids) appeared in Eocene period in fossilised amber (60 - 35 million years ago).

Psyllids, along with aphids, scale insects and whiteflies, belong to the Order Hemiptera, suborder Sternorrhyncha.

Insects in our gardens - Stage 3

Beetles were probably the world’s first animal pollinators; they pollinated cycads long before flowering plants came on to the scene. What insects are in your garden and why are they there?

Most flowering plants rely on pollinators for survival. Did you know that one out of every three bites of food we eat is made possible by pollinators?  What part do insects play in providing our fruit?

Why most animals are insects

Insects comprise 75% of all animal species that scientists have named and described, and most of these insects have wings. The key to insect success is their ability to survive on land and take to the air.