Decomposition: fly life cycle and develo
Insects in a corpse is a critical clue towards estimating the time of death

Corpse fauna
Many kinds of organisms live by feeding on dead bodies.

Decomposition of a corpse is a continual process that can take from weeks to years, depending on the environment. Below we have divided the process into stages, which are characterised by particular physical conditions of the corpse and the presence of particular animals.

To illustrate the process of decomposition, we use the piglet as the model corpse. Piglets are used because a 40 kg pig resembles a human body in its fat distribution, cover of hair and ability to attract insects. These factors make pigs the next best things to humans when it comes to understanding the process of decay of the human body. The pigs in this website are newborn piglets (weighing about 1.5 kg) that have been accidentally crushed by their mothers - a key cause of death of piglets. Their bodies have been donated to science. Please note - this set of images contain strong graphic references and descriptions.

A live pig is not outwardly decomposing, but its intestine contains a diversity of bacteria, protozoans and nematodes. Some of these micro-organisms are ready for a new life, should the pig die and lose its ability to keep them under control. 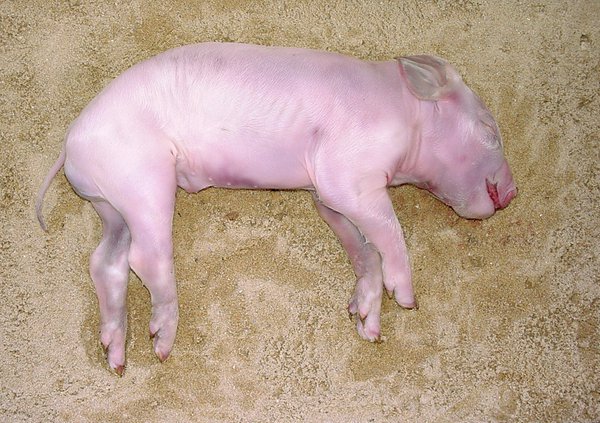 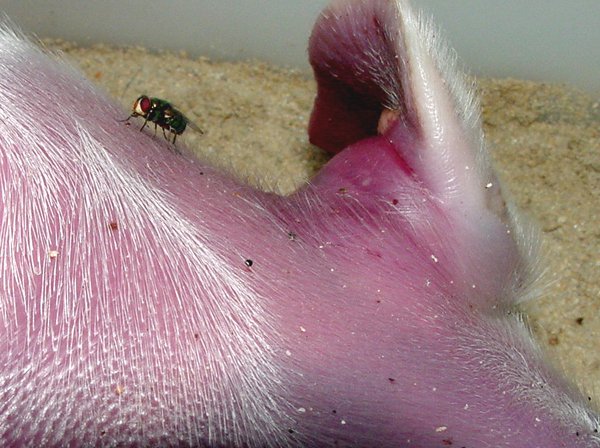 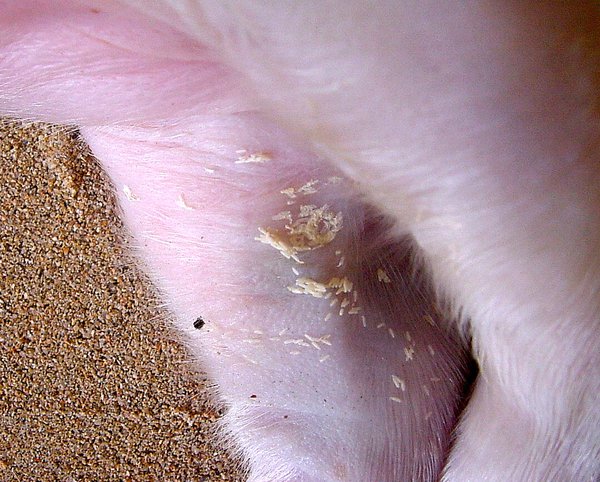 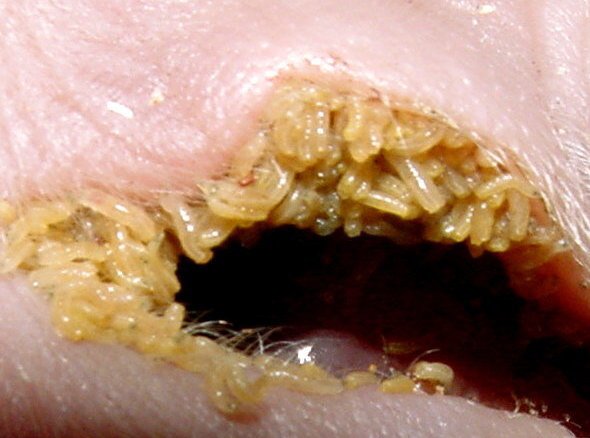 Although the body shortly after death appears fresh from the outside, the bacteria that before death were feeding on the contents of the intestine begin to digest the intestine itself. They eventually break out of the intestine and start digesting the surrounding internal organs. The body's own digestive enzymes (normally in the intestine) also spread through the body, contributing to its decomposition.

On an even smaller scale, enzymes inside individual cells are released when the cell dies. These enzymes break down the cell and its connections with other cells.

From the moment of death flies are attracted to bodies. Without the normal defences of a living animal, blowflies and house flies are able to lay eggs around wounds and natural body openings (mouth, nose, eyes, anus, genitalia). These eggs hatch and move into the body, often within 24 hours. The life cycle of a fly from egg to maggot to fly takes from two to three weeks. It can take considerably longer at low temperatures. 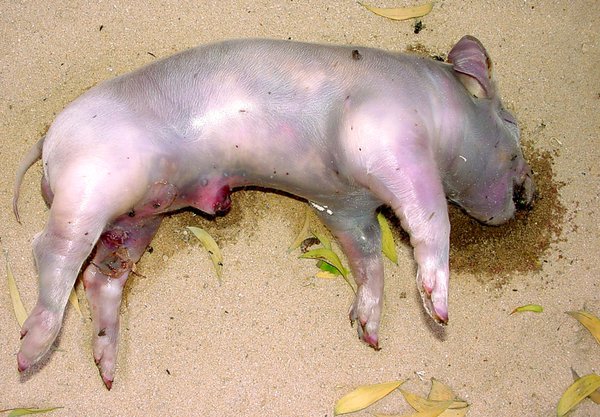 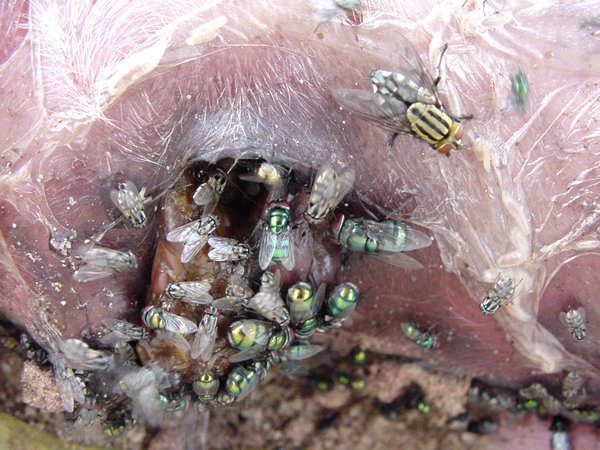 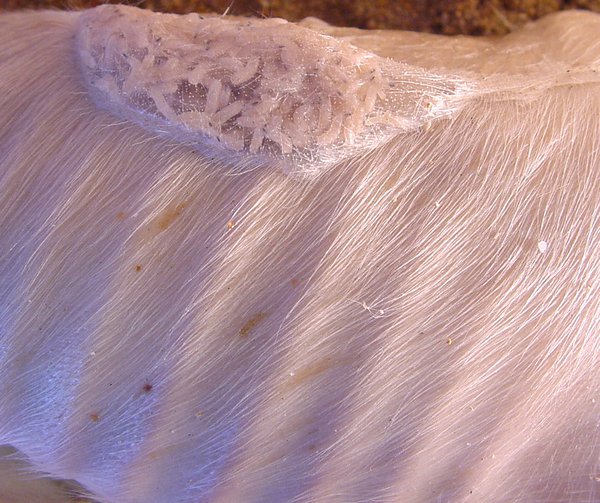 Bacteria break down tissues and cells, releasing fluids into body cavities. They often respire in the absence of oxygen (anaerobically) and produce various gases including hydrogen sulphide, methane, cadaverine and putrescine as by-products. People might find these gases foul smelling, but they are very attractive to a variety of insects.

The build up of gas resulting from the intense activity of the multiplying bacteria, creates pressure within the body. This pressure inflates the body and forces fluids out of cells and blood vessels and into the body cavity.

The young maggots move throughout the body, spreading bacteria, secreting digestive enzymes and tearing tissues with their mouth hooks. They move as a maggot mass benefiting from communal heat and shared digestive secretions.

The rate of decay increases, and the smells and body fluids that begin to eminate from the body attract more blowflies, flesh flies, beetles and mites. The later-arriving flies and beetles are predators, feeding on maggots as well as the decaying flesh. They are joined by parasitoid wasps that lay their eggs inside maggots and later, inside pupae. 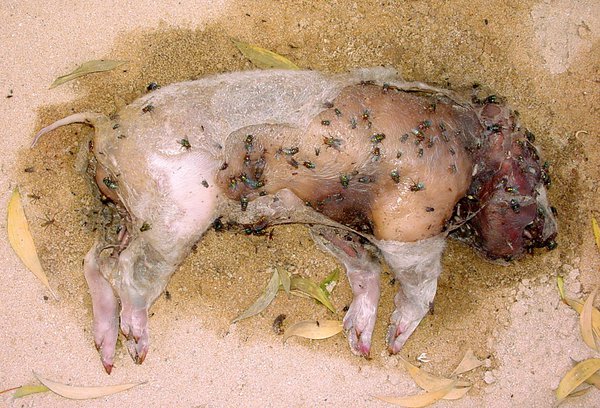 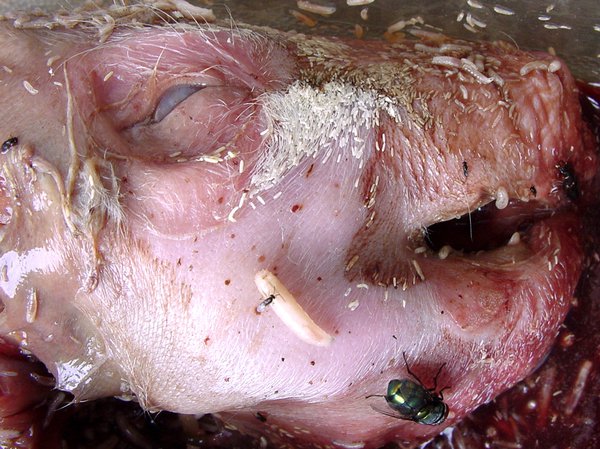 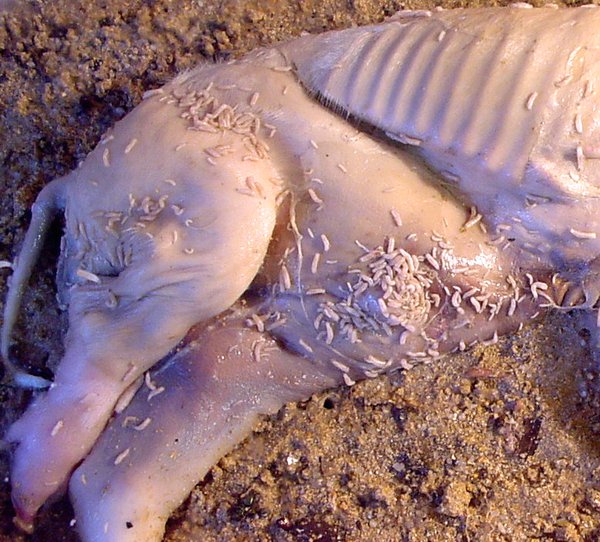 The bloated body eventually collapses, leaving a flattened body whose flesh has a creamy consistency. The exposed parts of the body are black in colour and there is a very strong smell of decay.

A large volume of body fluids drain from the body at this stage and seep into the surrounding soil. Other insects and mites feed on this material.

The insects consume the bulk of the flesh and the body temperature increases with their activity. Bacterial decay is still very important, and bacteria will eventually consume the body if insects are excluded.

By this stage, several generations of maggots are present on the body and some have become fully grown. They migrate from the body and bury themselves in the soil where they become pupae. Predatory maggots are much more abundant at this stage, and the pioneer flies cease to be attracted to the corpse. Predatory beetles lay their eggs in the corpse and their larvae then hatch out and feed on the decaying flesh. Parasitoid wasps are much more common, laying their eggs inside maggots and pupae. 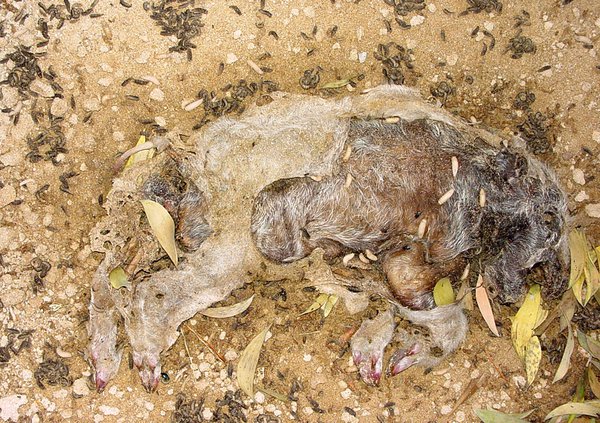 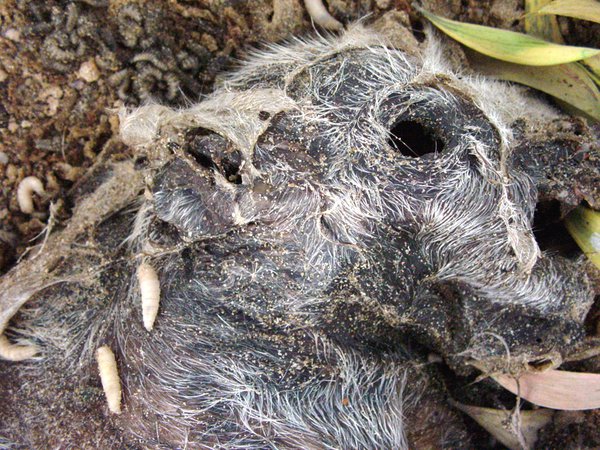 All the remaining flesh is removed over this period and the body dries out. It has a cheesy smell, caused by butyric acid, and this smell attracts a new suite of corpse organisms.

The surface of the body that is in contact with the ground becomes covered with mould as the body ferments.

The reduction in soft food makes the body less palatable to the mouth-hooks of maggots, and more suitable for the chewing mouthparts of beetles. Beetles feed on the skin and ligaments. Many of these beetles are larvae. They hatch from eggs, laid by adults, which fed on the body in earlier stages of decay.

The cheese fly consumes any remaining moist flesh at this stage, even though it is uncommon earlier in decay.

Predators and parasitoids are still present at this stage including numerous wasps and beetle larvae. 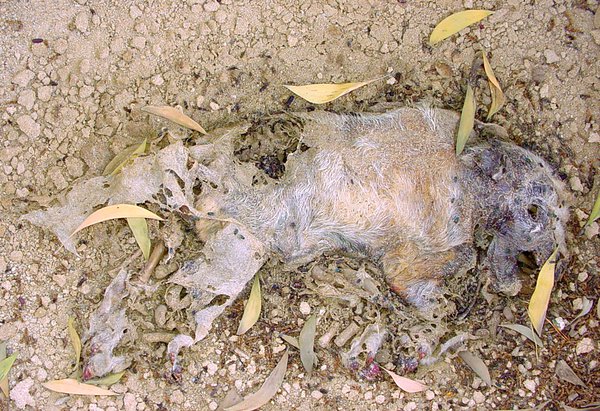 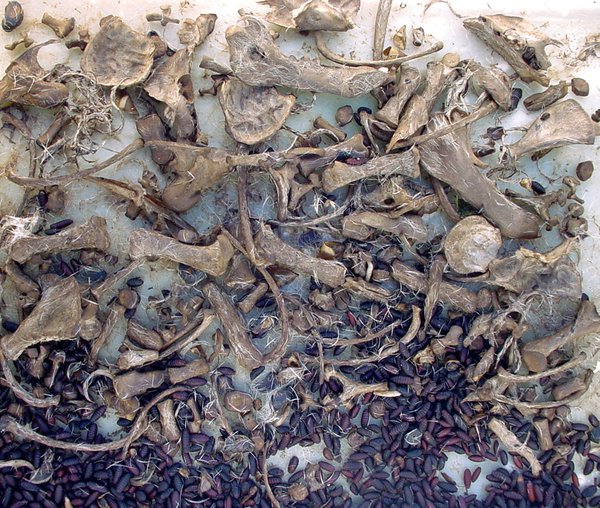 The body is now dry and decays very slowly. Eventually all the hair disappears leaving the bones only.

They remain on the body as long as traces of hair remain, which depends on the amount of hair that covers the particular species. Humans and pigs have relatively little hair and this stage is short for these species.

A glossary of key words and definitions relating to decomposition, including a list of references used in researching material about decomposition.

The environment provided by a dead body changes with time.

This change is a result of drying, and the activities and by-products of the corpse fauna. Different groups of animals find the corpse attractive at different stages of decomposition and the resultant change in the animal community is called a succession.

Many bacteria respire anaerobically (without oxygen) and so they can consume the body from the inside. They are also tolerant of the acidic conditions of the muscles shortly after death, caused by the build up of lactic acid. Because of these attributes and the fact that they are already present in the body before death, bacteria are the first colonisers and they continue to feed on a dead body until it dries out.

Flies have great powers of dispersal and they rapidly discover bodies, usually* ahead of thebeetles. Although they can feed on fluid that exudes from a fresh body, the acidic tissues of a fresh corpse cannot be digested by flies. The activities of the bacteria, and the excretions of fly larvae feeding on exuded fluid, eventually neutralise the acid making the semi-liquid corpse particularly attractive to blowflies, flesh flies and house flies.

*(Necrophorus beetles carry mites on their bodies (Poecilochirus) which feed on fly eggs. If the mites arrive before the eggs hatch, the carcass can be dominated by the beetles.)

The alkaline environment created by the flies is toxic for beetles and so beetles are largely excluded from feeding on the dead body itself as long as the fly larvae are active. However, many species of rove beetle, carrion beetle and burrowing beetle are still present in the early stages of decomposition because they are active predators of fly larvae, avoiding the alkaline tissues of the corpse.

Parasitoid wasps are also abundant at dead bodies, laying their eggs inside fly larvae and pupae.

Eventually, the corpse becomes too dry for the mouth hooks of maggots to operate effectively. The hide beetles, ham beetles and carcass beetles, with their chewing mouthparts, devour the dry flesh, skin and ligaments. Finally, moth larvae and mites consume the hair, leaving only the bones to slowly disintegrate.