Cicadas are the loudest insects in the world and there are more than 200 species in Australia.

It is thought that the sound produced by some communal species can act as a defence against predatory birds and some are even loud enough (120 decibels) to be painful to the human ear. Cicadas also often sing in chorus, which makes it more difficult for a predator to locate an individual.

Cicadas are so conspicuous that many of their common names were initially given to them by children. As a result cicadas probably have the most colourful common names in the insect world. Some of these include: Black Prince (Psaltoda plaga), Double Drummer, Floury Baker, and the Green Grocer or Yellow Monday, Cyclochila australasiae.

Cicadas spend most of their life underground. It has been suggested that some of the large, common Australian species of cicada may live underground as nymphs for around 6-7 years. This would explain why adult cicadas are much more abundant during some seasons that others, with peaks occurring every few years. The periodical cicadas of North America spend 13 or 17 years underground.

In contrast to that of the nymph, the life of adult cicadas is very short, lasting only a few weeks. After mating, the adult female cicada lays its eggs. It does this by piercing plant stems with its ovipositor (egg-laying spike at the tip of the abdomen) and inserting the eggs into the slits it has made. The eggs hatch into small wingless cicadas which are known as nymphs. They fall to the ground and burrow below the surface. Here they live on the sap from plant roots for a period which may last several years. They shed their skin at intervals as they grow.

When the nymph reaches full size it digs its way to the surface with its front legs, which are specially adapted for digging. It generally surfaces about nightfall in late spring or early summer. The nymph then climbs on to a tree trunk or other object and sheds its skin for the last time. The fully-winged adult cicada which emerges leaves its old empty nymphal skin behind. 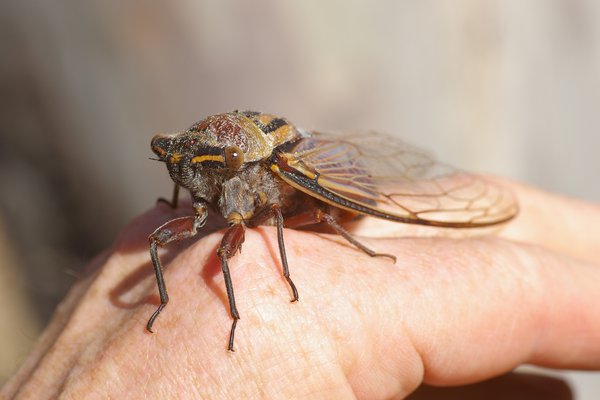 They are classified in the order Hemiptera, which includes all insects with piercing and sucking mouth-parts. (Other insects in this order are bugs, aphids and scale insects). There are more than 200 Australian species of cicadas, most of which belong to the one large family, the Cicadidae. Cicadas are sometimes known as locusts in Australia, but that term is more correctly applied to certain migratory species of grasshopper. 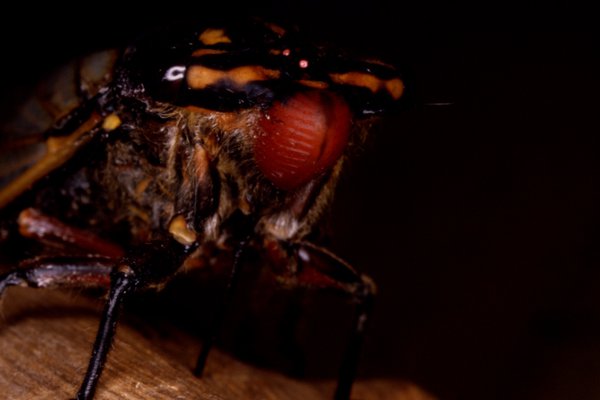 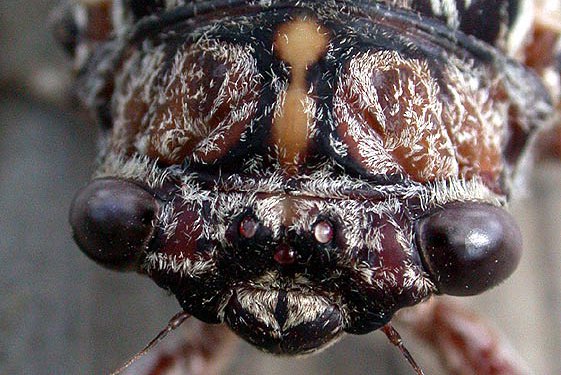 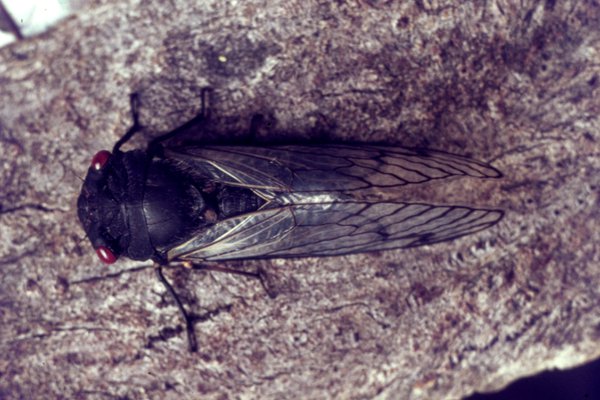 Adult cicadas have stout bodies with two pairs of wings. The wing spans of the different species range from about 2.5 cm - 15 cm. When not in use, the wings fold back along the sides of the body. The longer fore wing covers the short hind wing, but the wings of each side do not overlap. The fore wing is usually glassy and transparent although in a few species it is dull and opaque. The wings are strengthened by a number of thin, firm veins.

Adult cicadas have three pairs of legs all about the same length. The femur (thigh joint) of the fore leg is thicker than that of the other legs.

Cicadas have large compound eyes situated one on each side of the head They also have three very small glistening simple eyes (ocelli) on the top of the head. The cicada's antennae (feelers) are quite small and bristle-like.

The mouth parts of the cicada are enclosed in a long, thin, beak-like sheath. The sheath (labium) passes backwards from the lower surface of the head between the legs when the insect is not feeding. It contains four fine, needle-like stylets used in feeding.

What do Cicadas eat?

Cicadas feed by piercing the surface of plants with their mouth stylets. They then suck up the sap through a tube formed by the concave surfaces of two of the stylets. This piercing and sucking kind of feeding apparatus can be contrasted with the biting and chewing kind found in grasshoppers, cockroaches, beetles and caterpillars.

Cicadas may cause some slowing of the growth of trees from the amount of sap that they consume, but the effects are not very noticeable. They do not bite, though they may cling to the skin with their sharp claws when handled. They are considered harmless to people, despite the fact that their high-pitched call may annoy some people.

The adults of larger kinds of cicadas can be found on the trunks or branches of trees in summer. They are often wary and fly away when approached. Smaller kinds often live on low shrubs, or even on long grass.

Cicadas are eaten in large quantities by birds. They are also carried off by wasps as food for their young, and undoubtedly serve as food for many other animals Even the nymphs beneath the ground are parasitised by the larvae of Feather-horned Beetles (family Rhipiceridae).

Cicadas are notorious singers. The song is a mating call produced by the males only. Each species has its own distinctive call and only attracts females of its own kind even though rather similar species may co-exist.

Cicadas are the only insects to have developed such an effective and specialised means of producing sound. Some large species such as the Greengrocer/Yellow Monday and the Double Drummer produce a noise intensity in excess of 120 dB at close range (this is approaching the pain threshold of the human ear). In contrast, some small species have songs so high in pitch that the noise is beyond the range of our hearing.

The apparatus used by cicadas for singing is complex and research is still continuing on the mechanisms involved. The organs which produce sound are the tymbals, a pair of ribbed membranes at the base of the abdomen. Contracting the internal tyrnbal muscles causes the tymbals to buckle inwards and produces a pulse of sound. By relaxing these muscles, the tymbals pop back to their original position. In some cicada species, a pulse of sound is produced as each rib buckles.

Both male and female cicadas have organs for hearing. A pair of large, mirror-like membranes, the tympana, receive the sound. The tympana are connected to an auditory organ by a short tendon. When a male sings, it creases the tympana so that it won't be deafened by its own noise.

Many species of cicada sing during the heat of the day. The loud noise produced by some day-singing cicadas actually repels birds, probably because the noise is painful to the birds' ears and interferes with their normal communication. The males of many cicada species, including the Greengrocer/Yellow Monday, and the Double Drummer, tend to group together when calling which increases the total volume of noise and reduces the chances of bird predation.

Some cicada species only sing at dusk. They gain some protection from predatory birds by confining their activity to dusk.

Phylogeny for the tribe Thophini (Cicadoidea: Cicadidae) with the description of a new subspecies of Thopha sessiliba Distant from Western Australia

The external features of the heads of leafhoppers (Homoptera, Cicadelloidea)

An appraisal of the higher classification of cicadas (Hemiptera: Cicadoidea) with special reference to the Australian fauna