Blue-tongues have a long body, large head and short legs and toes. The tail is shorter than the body and generally tapers evenly to a point. Male blue-tongues have a proportionally larger head and stockier body than females but females grow slightly bigger than males.

Blue-tongues usually live in open country with lots of ground cover such as tussocky grasses or leaf litter. They shelter at night among leaf litter or under large objects on the ground such as rocks and logs. Early in the morning blue-tongues emerge to bask in sunny areas before foraging for food during the warmer parts of the day. Like all lizards, blue-tongues do not produce their own body heat, and rely on the warmth of their surroundings to raise their body temperature. Blue-tongues maintain a body temperature of about 30°C - 35°C when active. During cold weather they remain inactive, buried deep in their shelter sites, but on sunny days they may emerge to bask.

The Blotched Blue-tongue's range extends from Tasmania, through Victoria to the Blue Mountains of NSW. Widespread in lowland areas in the south of their range, they become progressively restricted to higher altitudes in the north.

Blue-tongues eat a wide variety of both plants and animals. Blue-tongues are not very agile and the animals they eat are mostly slow-moving. Their teeth are large and they have strong jaw muscles so they can crush snail shells and beetles.

When threatened, blue-tongues turn towards the threat, open their mouth wide and stick out their broad blue tongue that contrasts vividly with the pink mouth. This display, together with the large size of the head, may frighten off predators. If the threat does not go away, blue-tongues may hiss and flatten out the body, making themselves look bigger. A frightened blue-tongue may bite if it is picked up.

Female blue-tongues give birth three to five months after mating, between December and April.

The embryos develop in the female's oviduct with the help of a placenta, which is as well-developed as that of many mammals. At birth, the young eat the placental membranes, and within a few days shed their skin for the first time. The young are ready to look after themselves straight after birth, and disperse within a few days.

Blue-tongues probably become adults at about three years of age when they have a total length of about 400 mm. Blue-tongues are long-lived. Several captive animals have lived for 20 years, and they may live much longer.

Blue-tongues live alone for most of the year, but between September and November males pursue females and mating occurs. At this time, males may fight aggressively among themselves. Mating may be rough, with females carrying scrape marks from the male's teeth.

Look out for blue-tongues when mowing long grass! They will try to escape the lawn mower by hiding in the grass rather than running away. Blue-tongues like to bask on warm surfaces, and black tar roads which warm up quickly in the sun "lure" many to their deaths.

Adult blue-tongues adapt well to suburbs where there are large backyards with plenty of shelter. They rapidly become used to human activity, and may live in the same place for many years. Rockeries, horizontal pipes and the cavities under houses are favourite hiding places; sunny paths and lawns provide basking sites. Plenty of food such as snails, slugs and caterpillars is usually available in gardens, and a blue-tongue in the garden will help to keep down the number of snails and plant-eating insects.

Reptile ticks are commonly found on blue-tongues; they attach under the scales and in the ear canal. They do not normally attach to mammals, and are not known to cause paralysis. A number of nematode worms parasitise blue-tongues, and may sometimes be seen in faecal pellets. Again, these worms normally only parasitise reptiles.

In the bush the major predators of blue-tongues are large predatory birds (such as Brown Falcons and Laughing Kookaburras) and large snakes (including the Eastern Brown Snake, Red-bellied Black Snake and Mulga Snake). Feral cats and dogs also eat blue-tongues.

A bite from an adult blue-tongue can cause pain, break the skin and leave a bruise but there is no venom and hence no long-term ill effect. However the bite site should be cleaned with a mild disinfectant, as with any animal bite. 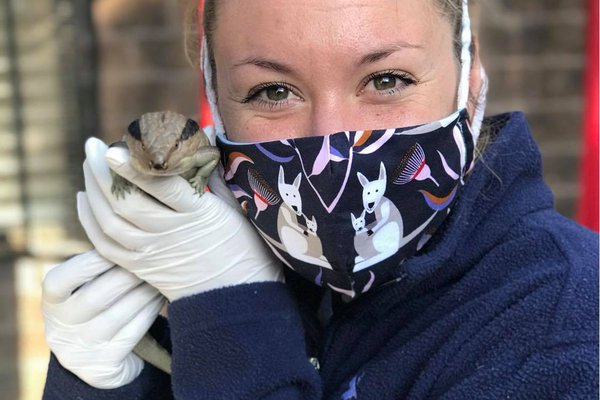