This beautiful serpent shares our love of sunshine and water, and is a familiar sight to many outdoor adventurers in eastern Australia. Attitudes towards these largely inoffensive snakes are slowly changing, however they are still often seen as a dangerous menace and unjustly persecuted.

A medium-sized snake, with a moderate to robust build and head barely distinct from the neck. Dorsal head and body colour is uniform black, except for the snout which is often pale brown. The lowest lateral scale rows and the outer edge of the ventral scales are bright crimson, fading to duller red, orange or pink in the middle of the belly. In the north of the range the ventral colour may be greyish-pink to white. The underside of the tail is black. Body scales are smooth and glossy. Eyes are medium size and shadowed by an obvious brow-ridge. The iris is very dark, and the pupil is round.

This species is usually associated with moist habitat, primarily streams, swamps and lagoons (although they may also be found well away from such areas), within forests, woodlands and grasslands. They also inhabit disturbed areas and rural properties, and are often encountered around drainage canals and farm dams. The snakes shelter in thick grass clumps, logs, mammal burrows and dreys, and under large rocks. Individual snakes appear to maintain a number of preferred shelter sites within their home range.

Red-bellied Black Snakes occur disjunctly in northern and central eastern Queensland and then more continuously from southeastern Queensland through eastern New South Wales and Victoria. Another disjunct population occurs at the southern end of the Mount Lofty Ranges in South Australia. The species does not occur on Kangaroo Island despite assertions to the contrary.

During the spring breeding season males actively search for females and consequently spend more time in the open and travel further than females generally do (up to 1220m in a single day). As the breeding season winds down males reduce their activity and by summer there is no significant difference between males and females in the amount of time spent in the open, either basking or moving, and both sexes bask less and become less active than they were in spring.

Red-bellied Black Snakes feed on a variety of vertebrates including fish, tadpoles, frogs, lizards, snakes (including its own species) and mammals. They search widely for prey on land and in water, and are known to climb to several metres. When hunting in water the snake may forage with only its head under or submerge itself fully. Prey captured under water may be taken to the surface or else swallowed while still submerged. Snakes have been observed deliberately stirring up underwater sediment as they hunt, presumably to flush out hidden prey.

In captivity, RBBS readily accept a diet of rats and mice, and are described as being voracious feeders. They are even known to eat fillets of fish, raw chicken and canned dog food. Once grasped by the snake the prey is often consumed rapidly, sometimes even before the venom has taken full effect. Captured individuals have been known to regurgitate live frogs, which may also suggest that venom was not used or that the frogs may have some resistance to the venom.

In the wild, active Red-bellied Black Snakes maintain a body temperature in the range 28 to 31º C during the day by shuttling between sunny and shady spots. The rate of heating in the morning is more rapid than the rate of cooling in the evening, an indication of their ability to control their temperature by behavioural (e.g. shuttling, body posture) and/or physiological means (e.g. by regulating blood flow to different parts of the body). RBBS are primarily diurnal however they can remain active well into the late evening if temperature permits.

When fleeing a terrestrial predator, RBBS may enter water and stay submerged with just their head showing, or else dive under completely for as long as 23 minutes. 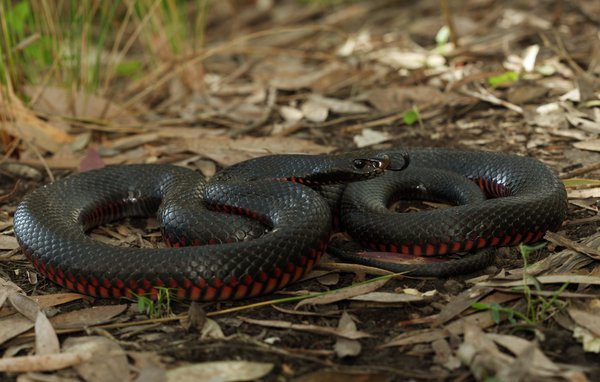 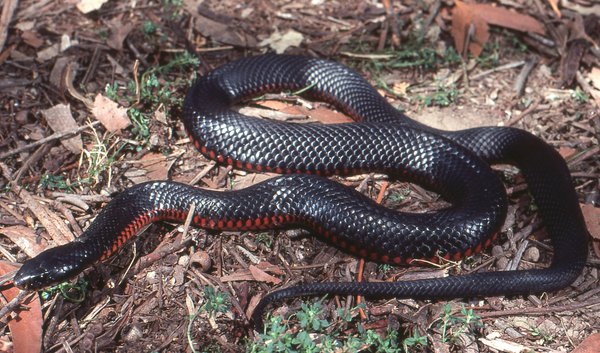 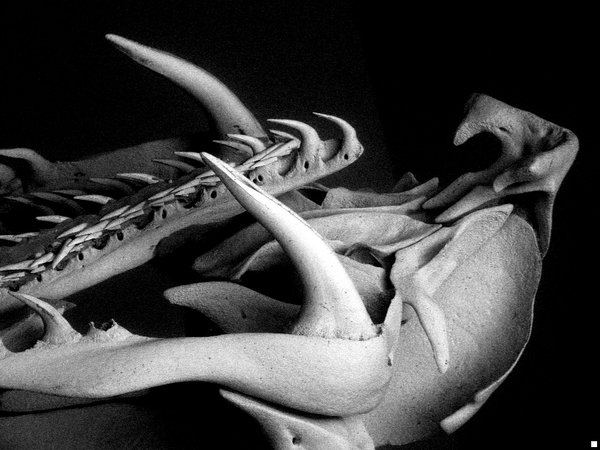 Courtship and mating among wild Red-bellied Black Snakes occurs primarily in spring (early October to November), although it may begin as early as late winter as suggested by the observation of blood residues around a female’s cloaca in late August (mating can cause the female to bleed from her vent, presumably due to spines present on the male hemipenes). Males travel widely in search of receptive females and will engage in combat with any rival male that they encounter. Combat involves the two combatants spreading their necks and rearing up their forebodies, and hooking their necks around one another with a twisting motion that leads to the bodies becoming intertwined. After the initial engagement, they lie outstretched along the ground, but in some cases the forebodies remain raised. The object of the combat seems to be to push and hold the opponent down, and during the struggle the snakes may hiss and even bite each other (the biting is not serious as the snakes are largely immune to their species’ venom). In the wild, the bouts may last from only a few minutes for up to half and hour, and in captivity, the same two snakes may engage in intermittent bouts over several days. During these bouts the snakes can become so pre-occupied that they are totally oblivious to their surroundings. Eventually a “winner” is determined and the snakes part ways, with the defeated male then leaving the area.

When courting a female, the male will approach and begin to rub his chin around and over her body, and as he progresses he may twitch excitedly and even hiss and bite the female. If the female is curled and receptive she indicates her willingness to mate by stretching out and allowing the male to align with her.

In the wild, females begin to develop yolking follicles in early spring and are gravid anytime between mid spring to late summer. Gravid females in some areas are known to gather in small groups (up to 6 individuals) towards the end of their pregnancies. These females bask together and will share the same night-time retreat. The reasons for these aggregations are unknown, although perhaps it allows for greater protection against predators. During late pregnancy females do not feed and stay close to their retreat. Four to five months after mating the female gives birth to between 5 and18 young that are born enclosed in a membranous sac. They emerge from the sac soon after birth (although they can remain inside for up to two days), and measure around 28cm in total length. Red-bellied Black Snakes are the only species in the genus Pseudechis that have live young (the other species all being egg-layers), and this ability gives them an advantage in cooler climates by allowing the female to have greater control over the temperatures at which her young develop.

Red-bellied Black Snakes reach sexual maturity in 2-3 years, although there is a record of one male that was mature at only 19 months of age.

During long periods of drought, reproduction may be limited or even cease altogether.

Although the Red-bellied Black Snake is still relatively abundant in some areas, its strong association with riparian and wetland habitats makes it vulnerable to the draining and destructive management of these ecosystems. It has also proved vulnerable to the introduced Cane Toad, which is thought to have impacted heavily on its numbers in northern parts of its range.

The only recorded predators of adult RBBS, aside from humans, are feral cats, although presumably they would fall prey to other known ophidiophages, e.g. brown falcons and other raptors. Newborn and juvenile snakes face predation by smaller carnivorous birds, e.g. kookaburras, other snakes, frogs, and even invertebrates such as red-backed spiders.

Red-bellied Black Snake are susceptible to the toxin of Cane Toads (Bufo marinus), and rapidly die from ingesting or even just mouthing them. Their decline in parts of Queensland and northern NSW is thought to be due to the presence of toads, although there are signs that their numbers are recovering in some areas.

Red-bellied Black Snakes are one of the most frequently encountered snakes on the east coast of Australia, and are responsible for a number of bites every year. They are a shy snake and will generally only deliver a serious bite under severe molestation. When approached in the wild a Red-bellied Black Snake will often freeze to avoid detection, and people may unknowingly get quite close before registering the snake’s presence. If approached too closely the snake will usually try to flee towards the nearest retreat, which if located behind the observer may give the impression the snake is launching an attack. If unable to escape the snake will rear up with its head and forebody held off but parallel to the ground, spread its neck and hiss loudly, and may even make mock strikes with a closed mouth. Some individuals will lay low and slowly undulate their tail in a fashion similar to many lizards, presumably to draw attention away from the vulnerable head. Further harassment will cause the snake to lash out and deliver a rapid (but often clumsy) bite, and sometimes they may hang on and chew savagely. The venom has predominantly anticoagulant and myotoxic effects, and symptoms of envenomation include bleeding and/or swelling at the bite site, nausea, vomiting, headache, abdominal pain, diarrhoea, sweating, local or general muscle pain and weakness, and red-brown urine (due to myoglobin being released from damaged muscle tissue).

For its size, the Red-Bellied Black Snake is probably the least dangerous elapid snake in Australia. Despite the number of bites received every year, very few human deaths have resulted (most death records date from early times and the snake's identity was often unconfirmed). Many bite victims experience only mild or negligible symptoms, however a number also end up hospitalized. The health risks to children and pets are greater, due to their smaller size. As individual reactions to envenomation can vary, all suspected bites should be treated as serious and medical attention sought as soon as possible.