Broad-scale clearing of land for agriculture, while disastrous for many native creatures, has proved a boon for the Eastern Brown Snake, and their numbers have proliferated thanks to the ready supply of rodents that followed. Despite the free pest control they offer to farmers and landholders, brown snakes are still widely seen as dangerous pests themselves.

A medium sized snake, with a slender to moderate build and a smallish head barely distinct from the neck. Body colour may be almost any shade of brown, ranging from near black to light tan, chestnut or burnt-orange. The head colour of dark individuals may be slightly paler than the rest of the body, but otherwise the dorsal colour is fairly uniform (a very few scattered dark scales may be present). Hatchlings have a prominent dark patch on the top of the head and across the nape, and some hatchlings also have dark bands down the entire length of the body. These markings fade as they mature, however in some populations the bands are retained into adulthood. Ventral surface is cream, yellow or orange, and blotched with pinkish-orange, brown or grey. Body scales are smooth and slightly glossy. Eyes are medium size and shadowed by an obvious brow-ridge. The iris is usually orange thickly rimmed with black, and the pupil is round. 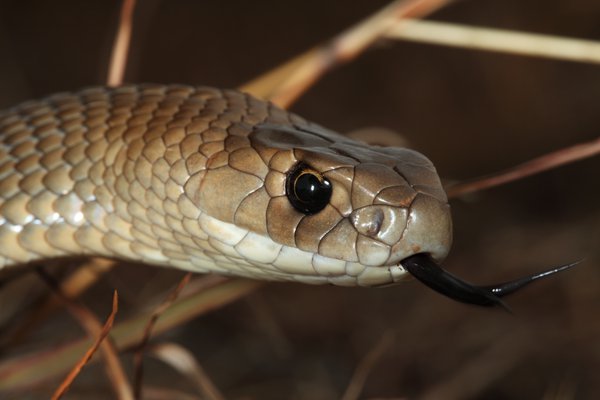 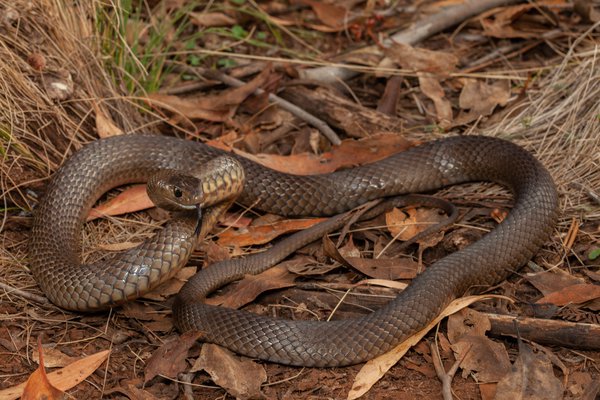 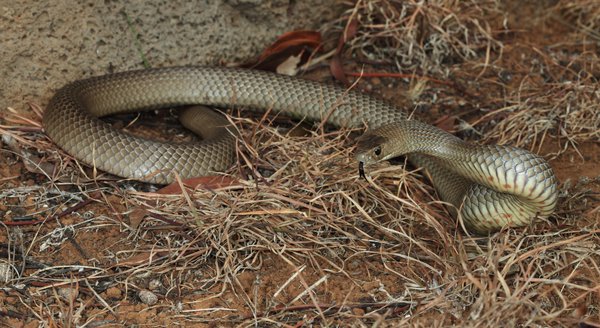 Eastern Brown Snakes can be found across a wide range of habitats (excluding rainforest and alpine regions), however they seem to prefer open landscapes such as woodlands, scrublands, and savannah grasslands. In arid inland areas they inhabit watercourses and swampy areas that receive at least some seasonal flooding. The species can be particularly abundant in rural areas that have been heavily modified for agricultural purposes, and is also frequently encountered on the suburban periphery of many large towns and cities. When inactive they shelter beneath fallen logs and large rocks, within deep soil cracks, and in animal burrows, and will readily utilize man-made cover, e.g. sheets of iron, building material, etc.. In the southern part of its range at least, Eastern Browns are known to share the same shelter site over winter, but whether the snakes are mutually attracted to each other at this time, or simply find the same shelter site independently of each other is unknown.

The species is widespread throughout eastern Australia, from northern Queensland to South Australia, with isolated population occurring in central and western Northern Territory. Pseudonaja cf. textilis also occurs in southern and eastern New Guinea. The New Guinean populations were once thought to have been introduced by human activity, however genetic evidence suggests the species reached New Guinea from northern Queensland (far eastern populations) and Arnhem Land (southern populations) during the Pleistocene.

Along a standard transect in central southern New South Wales, Eastern Brown Snakes were encountered at the highest rate in spring, followed by autumn and summer/winter. They can be found active on mild winter days and have been observed basking in air temperatures as low as 14º C. Males usually become active earlier in the season than do females (in spring, most road-killed snakes are males).

In the wild, Eastern Brown Snakes eat a variety of vertebrates, including frogs, reptiles and reptile eggs, birds and mammals, particularly introduced rats and mice. Smaller snakes, up to a snout-vent length of about 70 mm, eat proportionally more ectothermic prey, such as lizards, while larger snakes tend to consume more warm-blooded prey.

In captivity, they are known to be cannibalistic, especially so in over-crowded conditions, and may prey on snakes of almost similar size, e.g. a 165cm specimen once consumed a 150cm cagemate. Occasionally these snakes may attack prey that is too large for them to swallow, e.g. a wild Eastern Brown was observed to grab and then attempt to ingest (unsuccessfully) a large Eastern Bearded Dragon (Pogona barbata) (the dragon survived the attack, which raises the question of whether this potential prey species may be resistant to the snake’s venom).

Brown snakes hunt by actively looking for prey and searching in likely hiding places. They have good eyesight and once prey is detected they will give chase and subdue the prey using both venom and constriction. Eastern Browns are mainly diurnal hunters however during very hot weather they may delay foraging until late in the afternoon / early evening.

Breeding activity for Eastern Brown Snakes begins in mid to late spring. In the wild, males have been observed engaging in ritual combat for access to receptive females. The combating snakes intertwine tightly and wrestle for up to half an hour or more, with each snake trying to push down and overpower the other. Females start to develop yolking follicles between early and late spring (mid-September to end of November), and have oviducal eggs from mid-spring to early summer (late October to late January).

In captivity, mating has been observed in mid-spring (early October), with copulation lasting for at least 4 hours. Females may have the ability to store sperm for several weeks after mating, with one female caught on 12th November that did not lay her eggs until the following 9th January, a period of 58 days or over eight weeks.

Females can lay up to 25 eggs (15 on average) in a clutch, and in captivity females have been recorded coiling around their eggs for several hours after laying, which may be seen as a low level of maternal care, or possibly just the snake recovering from the exertions of labour. Depending on the incubation temperature the eggs may take from 36 days (30ºC) to 95 days (25ºC) to hatch. Under favourable conditions females may be able to lay several clutches in one season. Eastern Browns are known to use communal nests, with one containing a large numbers of eggs found in an abandoned rabbit warren.

Hatchlings may stay in the eggs for four to eight hours after slitting before poking their heads out, withdrawing back into the egg if frightened. Once fully emerged they may begin to show the characteristic threat display of the species with 15 minutes of emerging. The hatchlings vary greatly in size both within and among clutches. For example, the hatchlings of one clutch varied from 243-275 mm in snout-vent length (n = 21) and from 8.2 to 10.4 g (mean = 8.9 g) in weight (n = 15) while the hatchlings of another clutch varied from 189 to 202 mm in snout-vent length and 3.5 to 3.9g (mean = 3.8g) (n = 6) in weight. All hatchlings have bands on the head and neck but they differ strikingly with regard to the body pattern. Some are plain and some are banded, and both colour patterns are produced in the same clutch. There appears to be no correlation between colour morph and sex, and the pattern type is independent of incubation temperature.

Growth rates for elapids are relatively high (compared to pythons at least), and sexual maturity may be reached in a few years, e.g. one female captive-bred Eastern Brown that hatched in early autumn mated in the mid-spring of her third activity season at 31 months of age. The life span of wild Eastern Browns is unknown, however they have been recorded to live as long as 7 years in captivity, and like other large species of elapids can probably live for at least a decade. 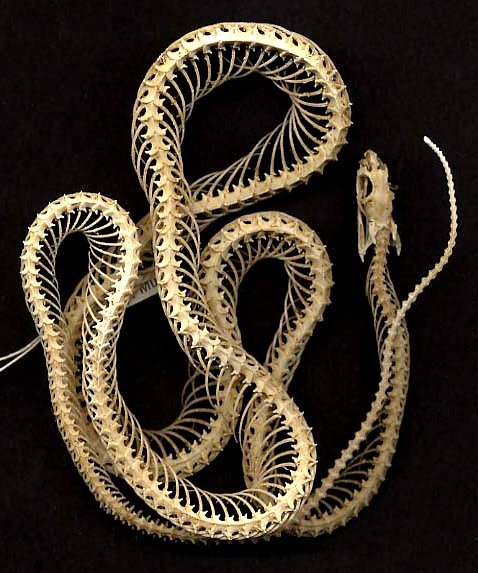 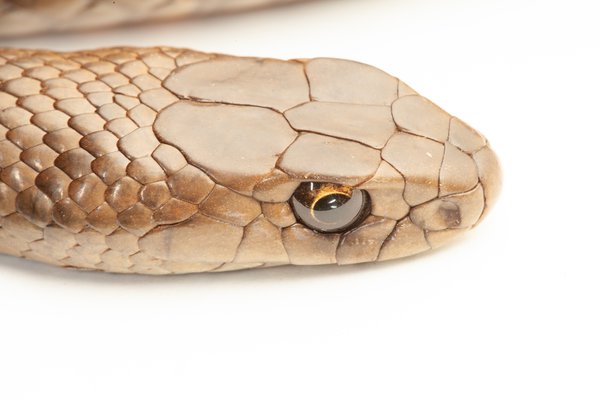 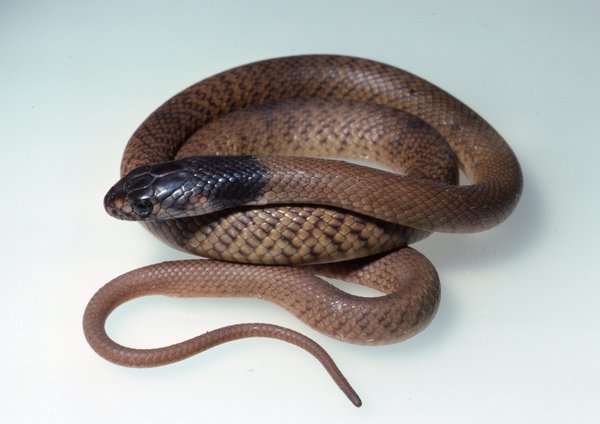 Given that the Eastern Brown Snake will readily inhabit areas disturbed by human activity and predate on an abundant, exotic food source (house mice), its future seems assured.

The species’ known predators include birds of prey and feral cats. They appear to have immunity to the venom of a would-be predator, the Mulga Snake (Pseudechis australis), as well as their own species (one snake that had been swallowed by another Eastern Brown was regurgitated an hour later, apparently not too much worse for wear). However they are not so fortunate with the effects of cane toad venom and rapidly die from ingesting them.

Countless brown snakes fall victim to road vehicles every year (both accidentally and on purpose), while many others are killed on sight by landowners.

Because the Eastern Brown Snake can cope and even thrive in areas of human disturbance, and its natural range happens to include some of the most populated parts of the country, this species is probably encountered more than any other type of snake. Being an alert, nervous species they often react defensively if surprised or cornered, putting on a fierce display and striking with little hesitation. However, if approached over a distance, they will usually choose to flee or else remain stationary, hoping to avoid detection. The approach distance tolerated before the snake flees is temperature dependent - snakes with a body temperature of < 24º C allow significantly closer approach than do snakes with a body temperature > 24º C. When confronted by an intruder, the Eastern Brown displays one of two forms of threat. In the mild threat, the snake raises the head and anterior part of the body slightly off and parallel to the ground, with the neck spread laterally and slightly hooked but the mouth closed. In this posture, the snake faces the threat side on. If issuing a strong threat, the snake raises the anterior part of the body well off the ground in an s-shaped coil and with the mouth slightly open, ready to strike - in this posture, the snake faces the threat more squarely. Strikes delivered from this posture are slower but more accurate that strikes delivered from other postures. The common feature of both displays is the spreading of the neck, and this behaviour precedes most bites. Observations in captivity have shown that for strikes in general, no matter what the posture, there was no correlation between strike speed and ambient temperature (18º-36 C), body mass or sex. Strike speeds ranged 0.25-1.80 m/sec (mean = 1.11 m/sec; n = 48). The lack of correlation between strike speed and temperature is unexpected in an ectotherm, and suggests that hot snakes are no quicker in their strike than a cool snake, contrary to the common perception.

Relative to other similar-sized elapids the fangs of the Eastern Brown are quite small (around 3mm), as is the average venom yield (around 4mg, although the record venom yield was 67mg). However what the snake lacks in venom delivery it makes up for in potency. The venom contains powerful presynaptic neurotoxins, procoagulants, cardiotoxins and nephrotoxins, and successful envenomation can result in progressive paralysis and uncontrollable bleeding. Occasional fatalities have occurred as a result of bleeding into the brain due to coagulation disturbances (consumptive coagulopathy).

As the initial bite is generally painless and often difficult to detect, anyone suspected of receiving a bite from an Eastern Brown Snake should call for medical attention without delay. This species has the unfortunate distinction of causing more deaths from snake bite than any other species of snake in Australia. Many bites have been a direct result of people trying to kill these snakes and could obviously have been avoided. Simple precautions, such as wearing long pants, thick socks and solid footware when working or exploring outdoors greatly reduces the risk of being envenomated should there be a close encounter with a startled snake.