Sixty-nine new species have so far been recorded, 19 of those in the last five years.

Some of the most unusual are the six species of giant geckos (genus Rhacodactylus) living on the island. These vary markedly in size, shape and behaviour. Leach's Giant Gecko, Rhacodactylus leachianus, has a body length of over 20 cm (the size of a Blue-tongued Lizard) and is the largest living gecko. Another species, the Knob-headed Giant Gecko, Rhacodactylus auriculatus, is partially carnivorous and eats other lizards using specialised canine-like teeth. The most spectacular-looking species is the Crested Giant Gecko, Rhacodactylus ciliatus, named for its row of enlarged, spine-like scales above the eye and along the neck. This species was 'lost' to science for nearly a hundred years. Until it was rediscovered in the mid 1990s, herpetologists believed that it might be extinct.

Collaborative research between Ross Sadlier of the Australian Museum and colleagues from the US, New Zealand, and New Caledonia is currently being undertaken to better understand the unique lizards of New Caledonia. Many species will require conservation in the face of increasing development in the region. 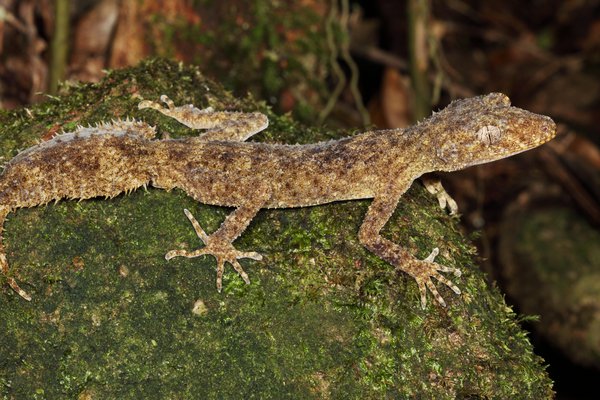 Allozyme Evidence for the Phylogeny of Giant New Caledonian Geckos (Squamata: Diplodactylidae: Rhacodactylus), with Comments on the Status of R. lechianus henkeli