The Stars-and-stripes Leatherjacket is usually seen in areas of sponge greater than 20m depth. Juveniles are mostly found in kelp beds, often alongside other species of the genus Meuschenia. It was only described as a species relatively recently.

The Stars-and-stripes Leatherjacket has a compressed body with a moderately shallow caudal peduncle that lacks spines, unlike some other species of leatherjackets. It has a strong first dorsal fin spine above the eye with small spines laterally.

This species is usually brown to white with distinct bands of brown spots. There is sometimes a white stripe on the lower side of the body.

This species is endemic to Australia. It is recorded in temperate marine waters from central New South Wales, around the south of Australia, to the central coast of Western Australia. 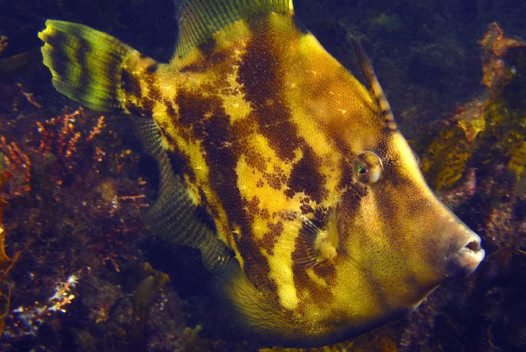