These are the sharp-toothed, ferocious meat-eating dinosaurs of popular imagination – the ultimate predators built purely to kill. Or are they? Collectively known as theropods, they range from bus-sized to chicken-sized, and include the outlandish parrot-faced, feathered, toothless and ostrich-like.

It is estimated that carnivores made up only about one per cent of the dinosaur population. This figure is typical of similar ecosystems today.

Teeth – all the better to eat with

Teeth of meat-eaters are adapted for killing and eating specific types of animals, such as insects, fish, reptiles and mammals, as each has certain requirements for catching, holding, killing and then eating. We can determine the likely diet of a meat-eating dinosaur by making comparisons with living animals.

Velociraptor (and other dromaeosaurs), Allosaurus, Giganotosaurus, Tyrannosaurus, Albertosaurusand Carcharodontosaurus had sharp teeth typical of modern flesh-eaters. They also had serrations on at least one tooth-edge. Serrations help cut through flesh and bone by a ‘grip and rip’ action. Different teeth reveal the different eating styles of flesh-eaters. For instance, Giganotosaurus teeth were quite narrow and long with effective cutting edges for slicing; Allosaurus had relatively short, small teeth to cope with impacts that may have occurred when attacking large prey; and Tyrannosaurus had teeth that were robust, conical and variable in size to crush bone.

Modern knives provide useful comparisons to flesh-eating teeth. You may have noticed how much easier it is to cut meat with a serrated knife rather than a butter knife (and that serrated knives do not require constant sharpening like other slicing knives). Serrated knives perform well when they are drawn or pulled across meat. Serrated tyrannosaur teeth likely functioned in a similar way, with strong neck muscles allowing these animals to tear apart their prey by pulling the teeth backwards through the flesh.

We know the teeth of T. rex were suited to crunching through flesh and bone. But were the jaws and skull capable of such a forceful bite? Modern technology helps provide the answer.

Experts use computer modelling techniques to analyse anatomical and biomechanical data from skull and muscle tissue. Of great importance are data on how the jaw works, how the muscles and bones contribute to bite strength, how stress is dispersed through the skull and the ability of the lower jaw to resist bending.

Interestingly, fossil evidence of a different kind supports views of T. rex as a powerful bone cruncher. A large 44-cm-long coprolite (fossilised poo) attributed to this species contains many bone fragments – nearly half of which are undigested.

Suchomimus and Spinosaurus had cone-shaped teeth similar to modern fish-eaters such as crocodiles, whose teeth are able to catch and pierce fish that tend to be slippery and hard to grasp. Like living crocodiles, their cone-shaped teeth didn’t preclude feeding on other organisms. A fossil from Brazil shows a close relative had a more diverse diet – a spinosaurid tooth was discovered embedded in a pterosaur vertebra.

Archaeopteryx (a bird, and so a theropod) had the small jaws and sharp teeth characteristic of living insect-eaters. These are useful for piercing tough exoskeletons of insects but can also be used to catch small lizards, fish and mammals. This is why it is hard to tell the difference between a true insect-eater and a small flesh-eater from fossils.

The odd ones out

Just when you thought you could tell a meat-eater by its sharp teeth and claws! These theropods have unusual features that make it difficult to determine what they ate. They include the beaked and toothless oviraptorosaurs, the ostrich-like ornithomimosaurs and the enigmatic therizinosaurs.

Did you know: Dino klutzes?

Theropods have the greatest number of limb injuries of all dinosaurs. This does not mean they were the most accident prone, but suggests they led very active lifestyles and that injuries were a big risk to a bipedal hunter.

The Tingamarra Chulpasia was a small marsupial mammal that ate a mixed diet, possibly including seeds, small fruits and insects.

Alioramus means ‘other [evolutionary] branch’ in Latin. The species name altai refers to the Altai Mountains, near the fossil site where the species was first found. This species is one of the smallest of the subfamily Tyrannosaurinae, and was about half the size of the closely-related Tyrannosaurus

The foods eaten by our ancestors can tell us a lot about their lifestyles and the environments in which they lived. Food has also played a major role in human evolution, particularly when meat became a significant part of the human diet about two million years ago.

Tryannosaurus rex T. rex is one of the most popular and enduring dinosaurs of all, starring in movies and children’s shows as well as featuring in pop culture memorabilia. 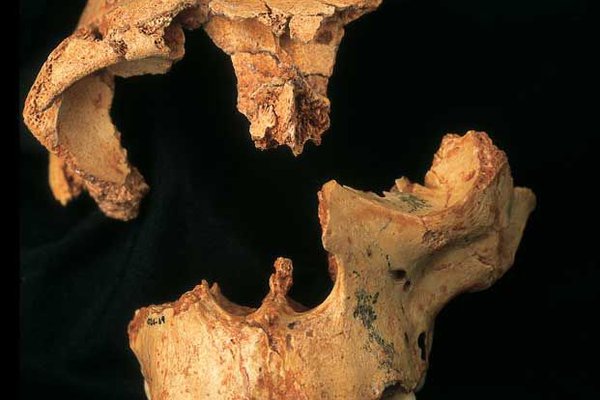 This species name is highly debated with many considering the remains to be Homo heidelbergensis. Whatever species they come from, these fossils are the oldest Homo found in Europe.