Termites are social insects that build large nests in soil or wood and can occasionally cause damage to wooden structures. They are sometimes called 'white ants', however they belong to a completely different insect group (Order Isoptera) to true ants (Order Hymenoptera).

Termites have pale brown to white bodies with a darker head and have no waist between the thorax and abdomen. The antennae have bead-like segments. The non-reproductive forms never develop wings, are blind, and have thin skin that makes them vulnerable to drying out. Reproductive forms have two pairs of equal-sized wings, one pair of compound eyes and a thicker skin that protects them better from drying out when exposed.

Nests are formed either in trees, in soil mounds or underground. There are 5 main nest types and many species will build more than one type of nest:

Termite colonies are maintained at a high humidity. This protects the thin-skinned workers from drying out. Only when the external humidity is close to 100% can workers leave the nest to forage. This is especially the case for subterranean termite species, which gain most of their water from the soil. These species can only become pests in buildings where a constant water source is available. Indoor plants on pavers are a major cause, as are leaking pipes or roofs). Termites that nest in dry wood don't have such strong water requirements and may attack wooden structures that are not necessarily very damp.

Nests are usually maintained at a temperature between 25°C - 36°C. This varies, depending on the species, the external temperature and the health of the colony. Healthy colonies are able to maintain this range during very hot and very cold external conditions.

Sometimes the nest shape is specifically designed to regulate temperature. The Compass Termite (Amitermes meridionalis) of the Northern Territory is known for its tall (3 m - 4 m) mound nests. These nests are thicker across their east-west axis (about 3 m) than along the north-south axis (about 1 m). This alignment means that the nest has the most protection from the hot summer sun as it moves east to west directly above the nest, but can still be warmed in winter, when the sun is at a lower angle.

Not all termites eat wood. Many species feed on grass and other matter, and are not pests in buildings. Those species that do eat wood, get cellulose, sugars and starches (all carbohydrates) from the sapwood (outer wood) of trees and can also eat any wooden structures, including logs, stumps and human constructions. They usually cannot eat the heartwood (innermost wood) as it tends to be much harder and can have toxins that repel the termites. Protein is obtained by eating fungi growing either in the humid nest - which also helps to keep the nest clean - or from moist wood surfaces.

Many termite species have special gut organisms that help them to break down the woody cellulose into sugars that can be digested. Some species have protozoa (single-celled organisms) that produce enzymes to digest the cellulose while others have bacteria. These organisms are transferred from termite to termite during grooming sessions, especially from adults to young.

Grass and spinifex-eating species are very important in the savannah ecology of Northern Australia. The large amount of biomass that they process makes them the equivalent of large mammals that eat grasses in similar savannah or prairie habitats in other parts of the world.

Termites have several castes that have definite tasks within the colony:

Needle in a haystack. This is a sequence of photographs showing what it takes to find and capture a queen termite from a termite mound. It was done as part of a genetic study into caste (worker, soldier, nymph etc ) determination in Coptotermes lacteus termites. C. lacteus are a common destructive species in Australia. 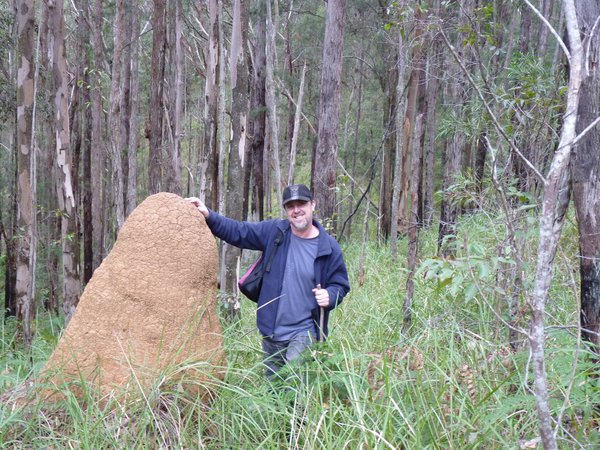 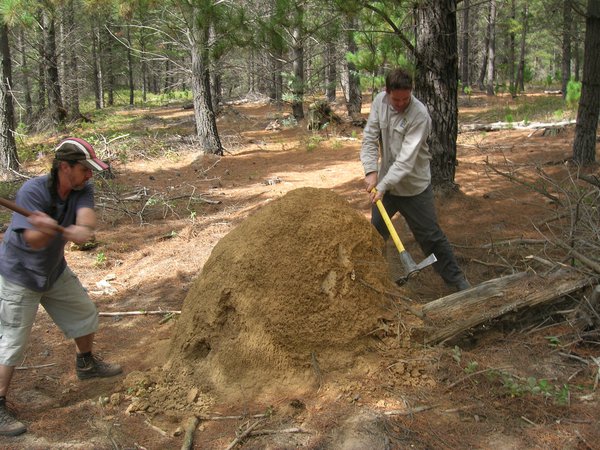 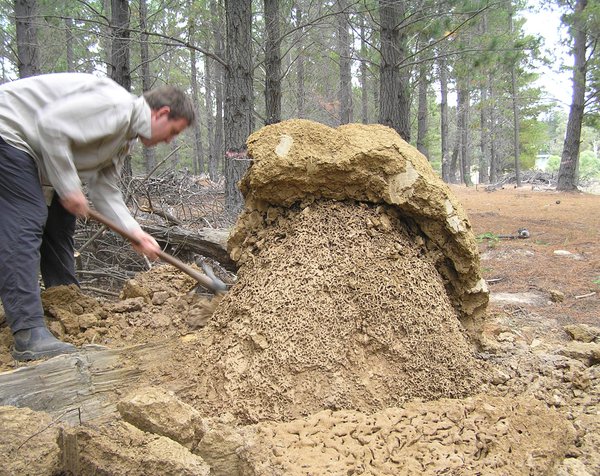 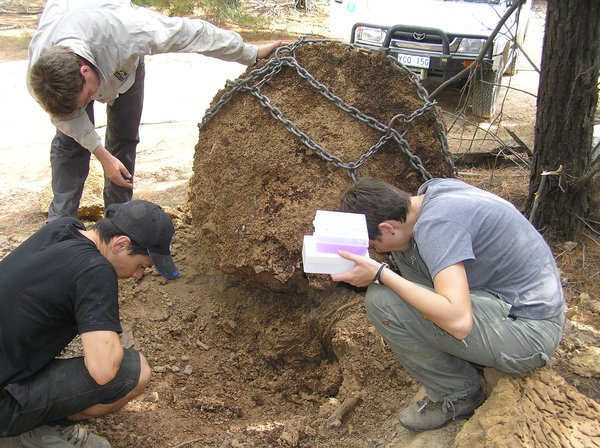 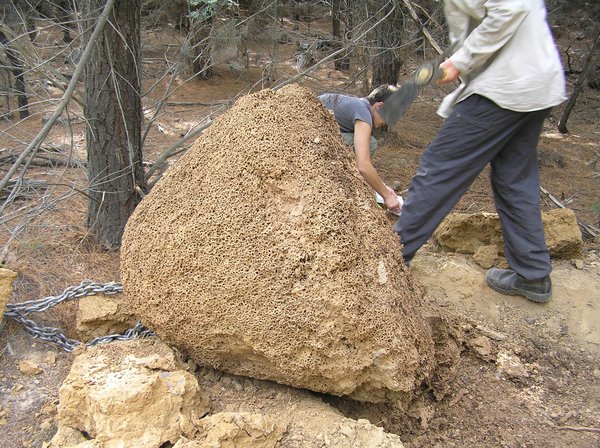 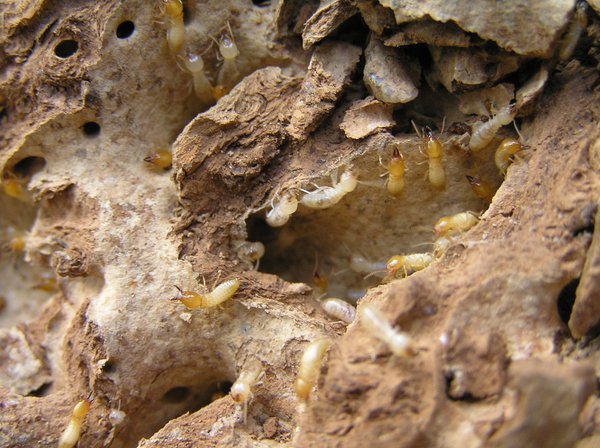 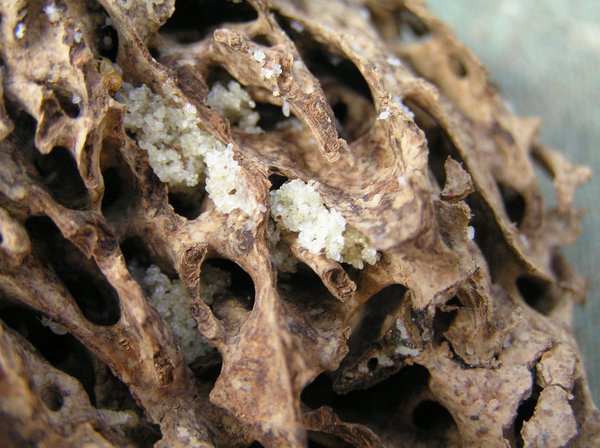 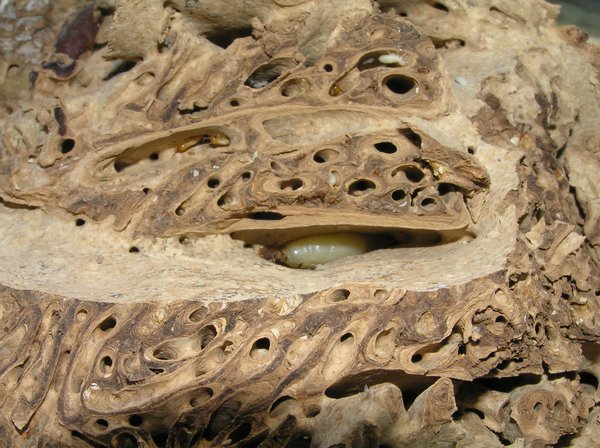 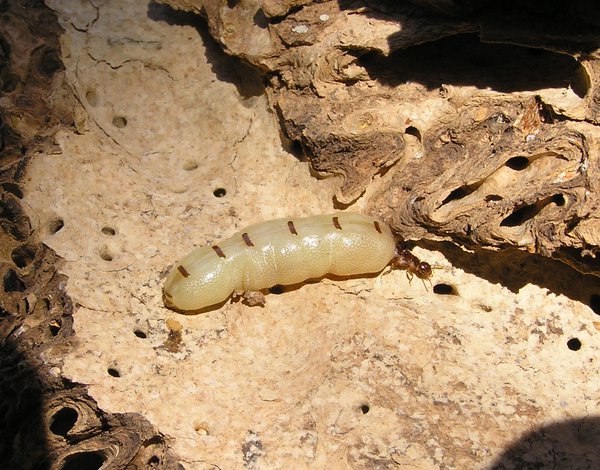 The eggs hatch into nymphs (the first instar) that are fed by the workers, and these nymphs then moult several times, differentiating into worker, soldier or reproductive forms. Development into adult forms takes several months, depending on food, temperature and the size of the colony. Hormones are thought to control the numbers of each caste, with imbalances corrected by nymphs developing into whichever form is needed at the time.

Termite colonies are formed when the winged reproductive forms leave their original nest and take a colonising flight. These flights occur during warm humid weather and usually take place during spring and autumn. The right combination of climatic conditions increases the chances of success in founding a new colony.

Once a suitable site is found, the mating pair (the new king and queen) drop their wings, hollow out a small mating chamber, and the queen begins to lay a small number of eggs. Both the king and queen care for the young at this early stage. As the colony grows, the different castes take on their roles of workers and soldiers, leaving the queen to produce more and more eggs. She will produce 10-20 eggs in the early stages of a colony and may go on to lay over 1000 eggs a day after several years.

Invertebrates are the most successful and prolific animals on the planet. They have been around for over 400 million years and dominate the animal kingdom in terms of numbers of species and numbers of individuals. Invertebrates have also adapted to occupy practically every ecological niche. So re

The Greater Bilby, sometimes depicted as Australia's Easter Bunny, belongs to a group of ground-dwelling marsupials known as bandicoots.