The Australian Brush-turkey has a mainly black body plumage, bare red head, yellow throat wattle (pale blue in northern birds) and laterally flattened tail. The Australian Brush-turkey is not easily confused with any other Australian bird. It is the largest of Australia's three megapodes (Family Megapodiidae). The megapodes are a distinct family of the group of fowl-like birds (Order Galliformes), which includes quails, turkeys, peafowl and junglefowl.

The Australian Brush-turkey's range extends along eastern Australia, from Cape York Peninsula, Queensland, south to the northern suburbs of Sydney and the Illawarra region of New South Wales.

Brush-turkeys feed on insects, seeds and fallen fruits, which are exposed by raking the leaf litter or breaking open rotten logs with their large feet. The majority of food is obtained from the ground, with birds occasionally observed feeding on ripening fruits among tree branches.

As with other megapodes, the Australian Brush-turkey incubates its eggs in a large mound. The male usually builds a single large mound of organic matter, approximately 4 m in diameter and 1 m high. Some males have been recorded with more than one mound, but this is not common. Eggs are laid by several females in a single mound. The eggs are incubated by the heat given off by the rotting vegetation. The male maintains a constant temperature of 33 - 38°C by digging holes in the mound and inserting his bill to check the heat, then adding and removing vegetable matter as required. Before the eggs hatch, many fall prey to burrowing predators such as goannas. After hatching, the chicks burrow out of the mound, at which point they are left to fend for themselves. These hatchlings are fully feathered and are able to walk and fend for themselves immediately. Remarkably, they are able to fly just a few hours after hatching.

The Australian Brush-turkey can sometimes damage gardens when raking up the ground looking for food. The New South Wales Department of Environment, Climate Change and Water is researching brush-turkey behaviour in urban areas and provides hints for living with them. 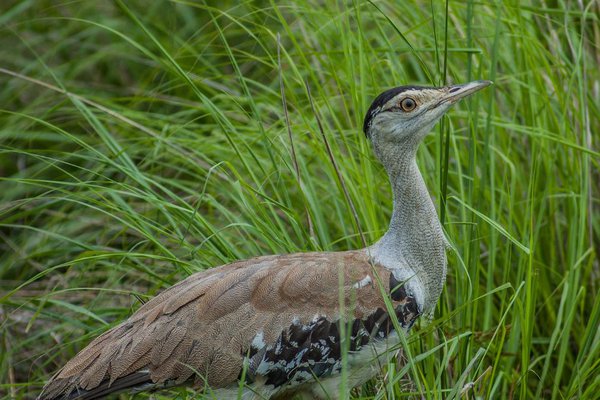 If there is a plague of mice or grasshoppers, Australian Bustards will gorge themselves on the plentiful food supply.

Nematode community structure in the brush-tailed rock-wallaby, Petrogale penicillata: Implications of captive breeding and the translocation of wildlife