First meeting in 1973
The First Annual General Meeting was held on 28 March 1973, Sir Harold Wyndham was elected President, and a draft Constitution was adopted. The Constitution provided for an annual election, from amongst the membership, of President and Vice-President and six members of Council, who would serve for a maximum term of three years. The Museum Director was an ex-officio council member, and three members of Museum staff were appointed by the Trust on recommendation of the council in consultation with the Director.

Executive administrative duties were performed initially by Faye Cameron, Executive Vice-president until 1977; then Susan Bridie until 1995; Carole Bibby until1997; Sandra Harrison until 2003and followed by Kate Murray until 2006.

Corporate sponsors
Corporate sponsorship membership commenced in 1977/1978. In 1981 the Constitution was amended to allow for fund-raising as an aspect of the Society’s business. Circles of Natural History was a tiered membership program, for corporate and individuals, launched in 1987. It was managed by a part-time manager. In 2000 a new membership structure was introduced. In 2005 fundraising was transferred to the newly established Australian Museum Foundation (a separate legal entity) and the Australian Museum Development Department.

In March 1982 TAMS became an Australian Museum benefactor in its own right with a contribution to the new Bird Gallery. Other significant donations have been to the Planet of Minerals; Dreamtime to Dust and sponsorship of the Investigation Centre (Search & Discover) which opened in 1994.

Review of mission
A developmental review of TAMS was conducted in 1997 following the Premier’s Department 1996 review of the Museum, and the mission statement was changed to reflect a better defined relationship between TAMS and the rest of the Museum. The Mission statement, 'To promote public awareness of the Australian Museum and its activities, assist it financially and support the Museum’s Mission statement' was adopted.

In 1980/1981 a separate position for the co-ordination of volunteers was established and Herti Verge was appointed to this position. The Super Science Series lecture program (joint AM & TAMS project) which brought to Australia some of the world’s foremost environmentalists and scientists commenced in1988.

In April 2006 the first edition of the magazine, 'Explore' was published. 'Explore' better reflected the scientific research of the Australian Museum and included promotional material. 'Muse' ceased publication. 'Talking Science', commenced in 1992/1993. This monthly volunteer radio program on 2 SER.FM was, by 1997, was a weekly radio show having moved to Eastside Radio. It ended in 1999. In 2010 a new Members Lounge opened off the William Street foyer.

TAMS/Australian Museum Members has been an active member of the World Federation of Friends of Museums and was instrumental in the establishment of the Australian Federation of Friends of Galleries & Museums in 1976. In 1977 Carol Serventy was elected President of AFFM. TAMS/Members have continued to be involved in AFFM (Kate Murray has served as Treasurer and President).

History of the logo
The initial logo (with some minor variations) was a dinosaur in a circle. This logo appeared in the letter sent, by Carol Serventy, to potential supporters in 1972.

In August 2006 the echidna logo was adopted. 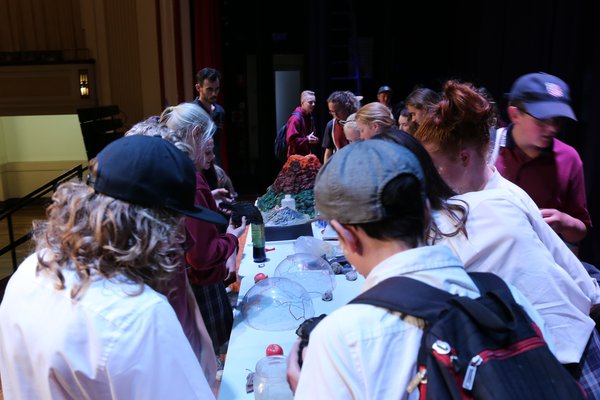 Three days on the road later and we were still thrilled hearing how many students have added "scientist" to their list of dream jobs.