It begins with brain cells and finishes with the skin cells. Death is therefore a process, rather than an event.

Defining death
There are three main ways that death can be defined: legally, culturally or clinically. Find out more.

When the heart stops beating

What is rigor mortis?

Rigor mortis refers to the state of a body after death, in which the muscles become stiff. It commences after around 3 hours, reaching maximum stiffness after 12 hours, and gradually dissipates until approximately 72 hours after death. Rigor mortis occurs due to changes in the physiology of muscles when aerobic respiration ceases.

Muscles are made up of two types of fibre. These fibres have connections between them that lock and unlock during muscle contraction and relaxation. These connections are controlled by a biochemical pathway within the cell, which is partially driven by the presence of calcium ions. The concentration of calcium ions is higher in the fluid surrounding muscle cells than it is inside the cells, so calcium tends to diffuse into the cell. High calcium levels inside the cell drive the biochemical pathway in the direction that maintains muscle contraction. To relax, muscle cells must expel the calcium ions from the cell and this requires energy molecules to pump them across the cell membrane.

After a body has died, the chemical reaction producing these energy molecules is unable to proceed because of a lack of oxygen. The cells no longer have the energy to pump calcium out of the cell and so the calcium concentration rises, forcing the muscles to remain in a contracted state. This state of muscle stiffening is known as rigor mortis and it remains until the muscle proteins start to decompose.

What is grave wax?

Grave wax, or adipocere, is a crumbly white, waxy substance that accumulates on those parts of the body that contain fat - the cheeks, breasts, abdomen and buttocks. It is the product of a chemical reaction in which fats react with water and hydrogen in the presence of bacterial enzymes, breaking down into fatty acids and soaps. Adipocere is resistant to bacteria and can protect a corpse, slowing further decomposition. Adipocere starts to form within a month after death and has been recorded on bodies that have been exhumed after 100 years. If a body is readily accessible to insects, adipocere is unlikely to form.

Bodies decompose through the feeding activities of a variety of organisms.

The body will be preserved if:

Although an exposed human body in optimum conditions can be reduced to bone in 10 days, a body that is buried 1.2 m under the ground retains most of its tissue for a year. However, the larvae of some blowflies and flesh flies, can easily locate and burrow down to bodies buried at 0.3 m. Adult coffin flies can burrow 0.5 m into the ground in four days.

If insects are excluded and the body decays slowly, other chemical reactions take place. Grave wax (adipocere) accumulates on the surface of a buried body if fatty deposits are permitted to break down slowly.

Bacteria can never be excluded because they are present in the intestine before death. However, the environment can be made unsuitable for bacterial activity by rapid drying of a body (mummification) or the introduction of bactericides (embalming). Similarly, freezing of bodies (cryonics) will prevent decay.

The time taken for a body to decompose depends on climatic conditions, like temperature and moisture, as well as the accessibility to insects. In summer, a human body in an exposed location can be reduced to bones alone in just nine days. 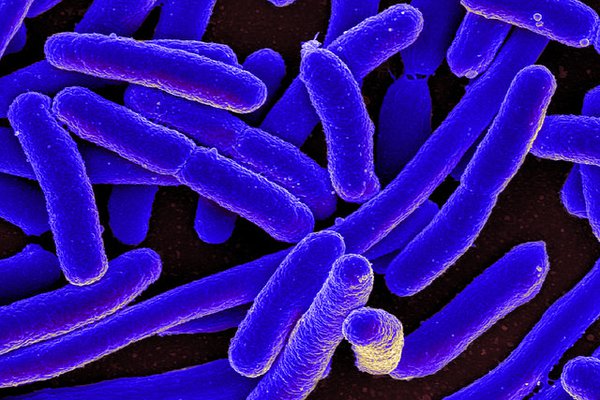 Are bacteria animals or plants?

There are about one trillion species of bacteria on Earth.