The Tirari Paljara possum ate leaves of the rainforest trees it lived in, also gobbling up insects found along the way. Mosses, ferns, lichens and fungi were probably also part of its diet.

Its closest living relatives are possums called 'woolly ringtails', which have thick fur that insulates them in the cool, wet crowns of the rainforest trees.

About 15 fossils of the Tirari Paljara, ranging from individual teeth to nearly complete jaws, have been found at the Leaf Locality in South Australia and at Riversleigh in northwestern Queensland.

Of all ringtail possums, alive or extinct, the Tirari Paljara is one of the smallest.

Nimiokoala greystanesi was a small koala from the early Miocene of northern Australia. It had a longer snout than the living koala but was only about a third of its size. Nimiokoala is represented by a well preserved skull, a significant discovery since koalas are rare in the fossil record. 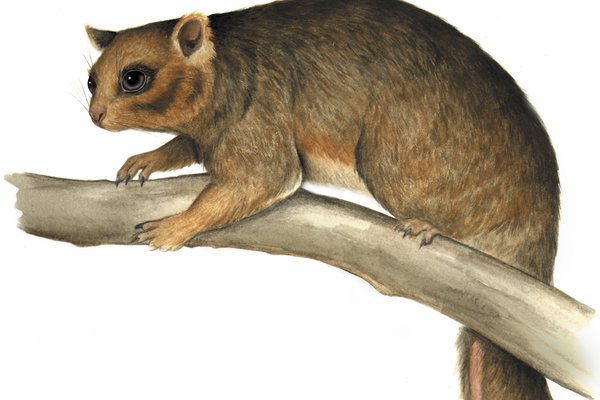 Chunia was a primitive ektopodontid, a distinctive group of Cainozoic Australian possums that may have been specialized seed-eaters. Ektopodontids, first thought to be monotremes, had short faces, large, forward-facing eyes and the most unusual and complex teeth of any marsupial.