There are an estimated 850 species of Hawk Moth world wide, with the highest diversity occurring in wet tropical regions. Australia has 65 species and in the Sydney region 21 species are known.

Many Australian species also occur in south-east Asia. Common moths found in suburban gardens include the Impatiens Hawk Moth (Theretra oldenlandiae), Pale Brown Hawk Moth (T. latreilla), Bee Hawk Moth (Cephonodes kingii) and the Privet Hawk Moth (Psilogramma menephron). Adults are usually most active at dusk or at night but some, such as Bee Hawks, fly during the day.

Adult Hawk Moths are medium to large in size. They are streamlined, robust flyers with an obvious head and large eyes. The forewings are long and narrow and much larger than the hind wings. When the moth is at rest the wings are tented over the body. The abdomen is large and has a tapered cigar-shape appearance. Hawk moths often have a long proboscis, coiled when not in use, which is used in nectar feeding. The adult moth hovers in front of flowers and inserts its proboscis to drink the nectar.

The larvae (caterpillars) are large and often colourful, usually with a long horn near the end of the body. Many have lateral stripes and/or large eye spots on the thorax and abdominal segments. The colour patterns help to camouflage the caterpillars and the large eye spots may assist in warding off predators. The caterpillars don't bite or sting but may regurgitate green fluid (from a previous meal) if annoyed. 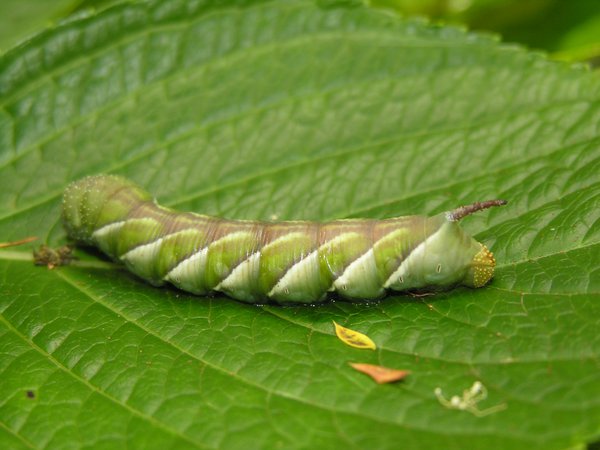 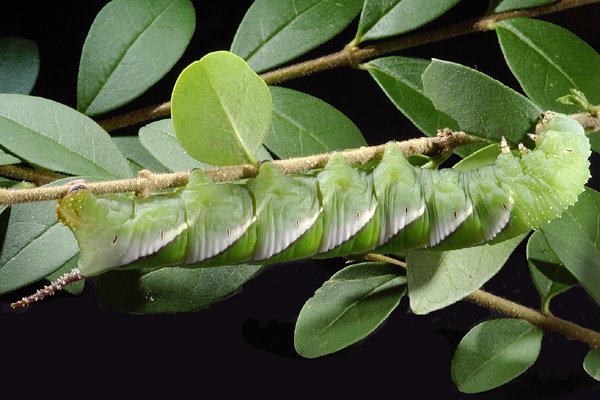 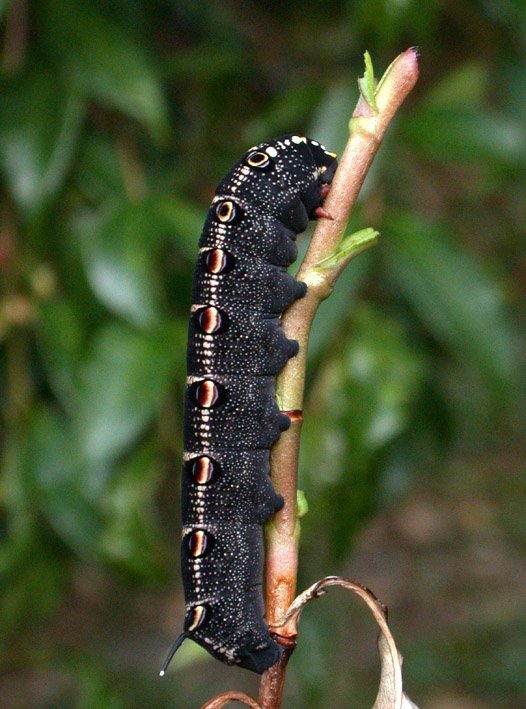 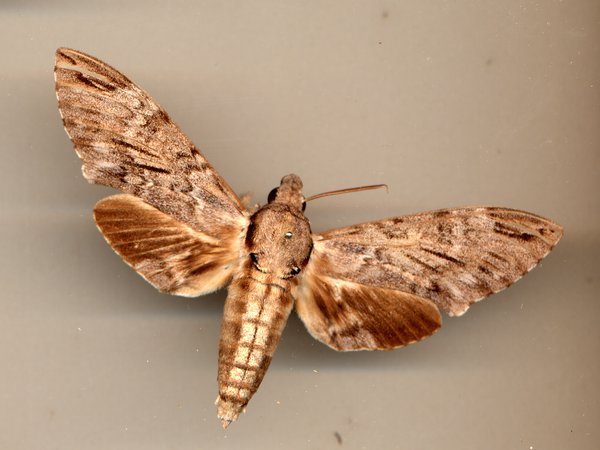 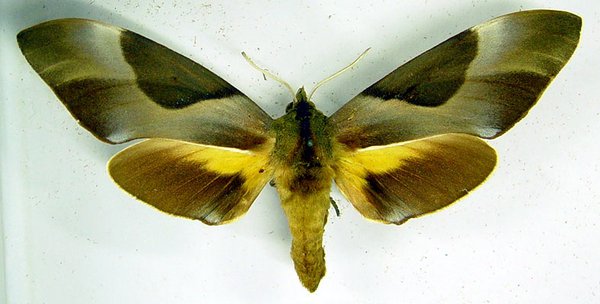 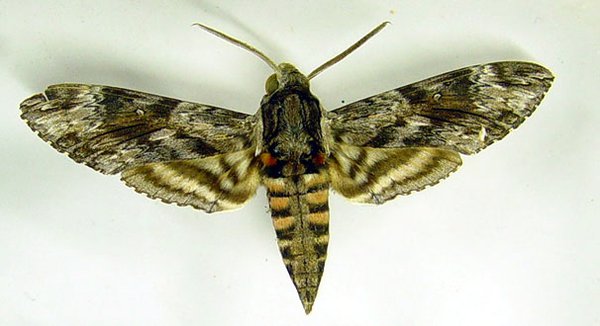 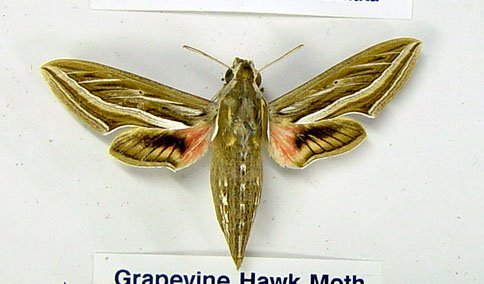 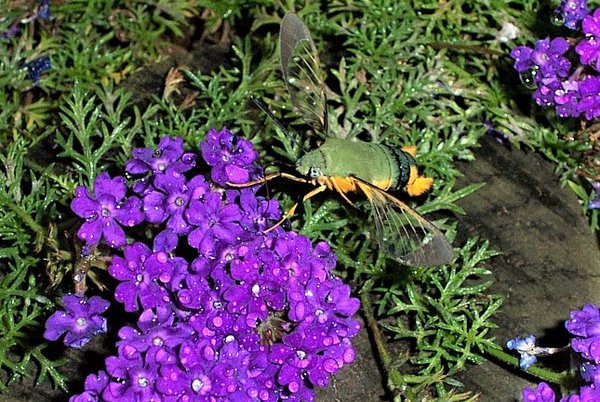 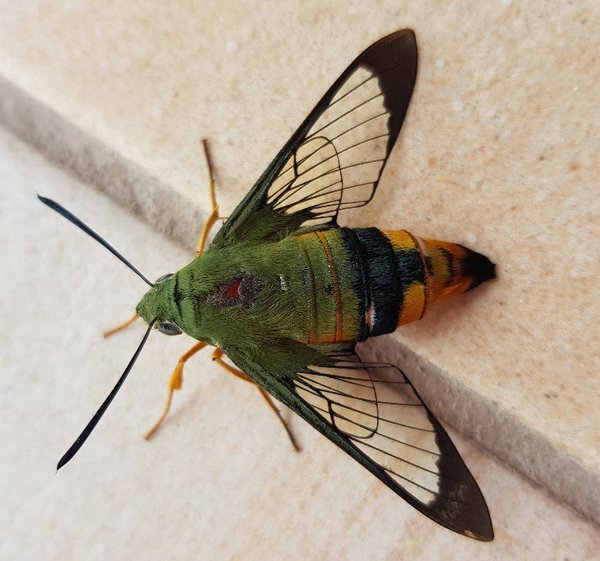 The Bee Hawk Moths, Cephonodes spp., are distinctive green, yellow and black striped hawk moths, with a wingspan of about 4 cm.

The moths lose the scales on their wings with their first wing flutters giving them the appearance of a large bumble bee. This is emphasised when the moth hovers in front of flowers while feeding.

Like all hawk moths a single egg is laid underneath a leaf of the food plant. The larvae vary in colour starting off as black or grey with black lines laterally along the back. As they mature they become green. The posterior horn is an S-shape. When annoyed the larvae rear back and may regurgitate a green fluid. Pupation takes place in the soil.

The Bee Hawk Moth larvae are most often noticed on the introduced Gardenia species. Other larva food plants include:

These moths are found throughout northern and eastern Australia.

The caterpillar of the Impatiens Hawk Moth, Theretra oldenlandiae, is a common visitor to suburban Sydney gardens. It is most frequently found on Balsams, Impatiens balsamina, I. oliveri and I. wallerana, often eating all the leaves.

Some other larval food plants include:

The caterpillars are black with yellow spots and strips, and have a thin spine at the end of the abdomen that has a white tip. Mature larvae can reach a length of 7 cm. The larvae pupate in a loosely woven cocoon, which they construct within leaf litter.

The adult moth is a dull brown colour with two silvery bands down the abdomen. The forewing has two dark brown strips outlined on the lower surface by a silvery band and separated by a pale brown strip.

These moths are found from northern Australia to coastal New South Wales.

The Banksia Hawk Moth (Coquesa triangularis) is the largest Australian hawk moth and is found in eastern coastal areas, from Victoria northwards. It is found in the bushland regions and outskirts of metropolitan Sydney. The grey-brown larvae are very large, with a wrinkled texture.

Eggs are laid singly on the underside of leaves of the larval food plant. The female will lay up to 100 or more eggs in a season. The early instar (larval stage between two moults) larvae are also found on the under surface of leaves while the older larvae camouflage themselves on stems.

When larvae are ready to pupate, they move down into the leaf litter where they make a rough open cocoon or cell on the soil surface. Some larvae move further into the soil and pupate in an earthern chamber below the soil surface. The pupal stage lasts from around 1 to 25 weeks.

The adult moth lives for several weeks and in that time must feed regularly, mate and lay eggs for the next generation. Females attract males using pheromones (chemical substances).

Some species have adults that can make a loud hissing noise when disturbed. This may scare off potential predators.

Although they may eat your plants as caterpillars, hawk moths are not considered pests. The adults have an important role as pollinators of many plant species and are the most significant pollinator of papaya (pawpaw) crops.

A review of the Australian hawk moths of the genus Macroglossum Scopoli (Lepidoptera: Sphingidae)

A new hawk moth from northern Australia with notes on its life history (Lepidoptera: Sphingidae)