Today is a public holiday in Vanuatu. I met a couple of mates at 6.30 am at my boat mooring, planning to go for a dive. I swam out and retrieved the boat, then loaded it up with all the tanks and gear.

We were just about to set off, when walking in the shallows I trod on something sharp. It didn't hurt too much but I could see a small bleeding cut on the side of my heel. It felt a bit odd so I thought that I may have trodden on a sea urchin.

I grabbed my mask and peered into the water. I saw a Scorpionfish on the sand, I think a Caledonian Stinger, Inimicus caledonicus but possibly a Longsnout Stinger, Inimicus didactylus. My foot was starting to ache a bit now so I thought that we had better stick around a little while before embarking on a deep dive in case other symptoms developed.

Within 5 minutes I was in severe pain. My heel felt like a big thorn was being driven into it, and I had extreme pain up the side of my leg. I asked the villagers to bring some hot water and I put my foot in it. (This is the first aid treatment to lessen the pain of many scorpionfish stings - see further reading). The hot water seemed not to help at all and soon I was beside myself with the pain.

All the villagers came to look at the white man in pain, and they started discussing how they never walk out at low tide. They said that in future if I ever wished to borrow their canoe to get my boat I was welcome. Not wishing to appear impolite, I tried to seem grateful while I urged my mate to unload the gear out of the boat, put the boat back on the mooring and get me home ASAP.

Meanwhile the locals were discussing how one of their friends trod on the same sort of fish and ended up with nine holes in his foot (I only had one hole). Their friend was a big strong man but he cried for hours. They discussed local leaf remedies and someone disappeared into the bush to find the correct plant. Another fellow offered to urinate on my foot. I had more faith in western anaesthesia (or even amputation by now!) so with assistance, I got into the car and my buddy drove me home. A friend from the hospital (who was in the middle of a bout of malaria so wasn't feeling to chipper himself!), met me at my house armed with a bag of drugs.

I had continued the hot water treatment but the pain was unreal. I was sweating and hyperventilating which was making my head spin.

I showed him how to do a nerve block on my ankle with local anaesthetic, and he injected the area. I could barely feel the needle. Within a few minutes I could feel the numbness creeping down my ankle until it reached the affected area ... Ah BLISS! The transformation that came over me was nothing short of miraculous. I still felt a bit rough, but 1000% better than before. Well enough in fact to get the books out and study my nemesis! Now I sit here one hour later with nothing but a numb foot and a slight ache up the leg to show for it. Hmmm... what happens when the local anaesthetic wears off?

Well, fifteen hours later the local anaesthetic wore off but fortunately the venom had worn off some time earlier. Now it just feels like a very deep bruise and there is a red flare up the side of my foot. 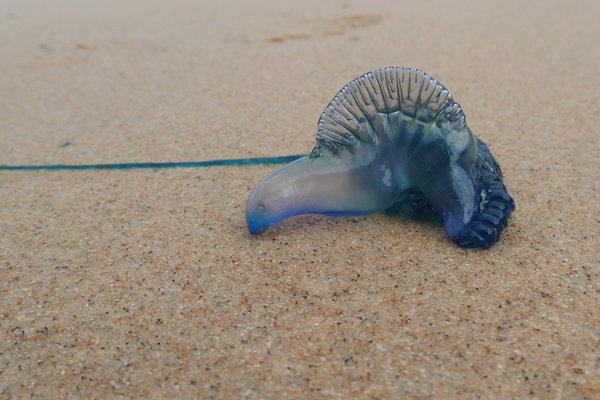 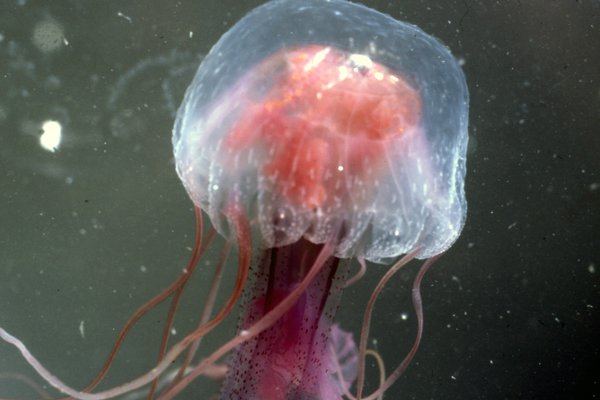 The Purple Stinger is a delicate, small and attractively coloured jellyfish with four fragile mouth arms and eight tentacles around the bell. 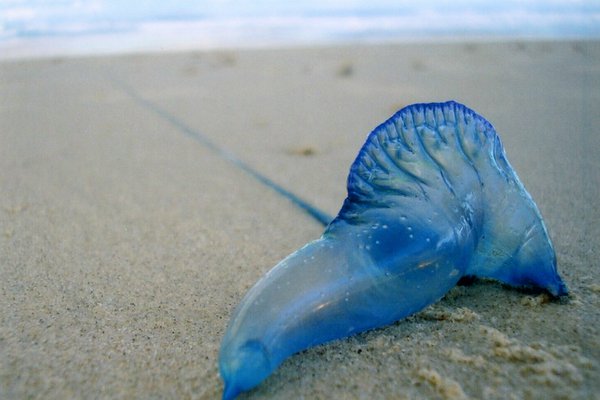 The Bluebottle is a common species that often gets washed up onto Sydney beaches in the summer time.