Upside-down jellyfish occur naturally across a broad range of tropical locations. World-wide, however, some species are considered invasive, with the potential to act negatively on the local marine environment and impact the use of waterways when congregating in large numbers. These jellyfish are very distinctive due to an unusual habit of resting upside-down, with their bell on the sea floor with their oral arms extending upwards.

Upside-down jellyfish have a flattened bell so they can easily rest on sediment. The bell continuously pulses in order to push water over the jellyfish’s tissue, providing it with oxygen and bringing food. Their eight oral arms that extend upwards when resting are branched, splayed out, and typically green/grey/blue in colour. This colour comes from a photosynthetic algae called zooxanthellae, which lives inside the jellyfish’s tissue. They are also capable of swimming, using regular contractions of the bell to push them through the water. 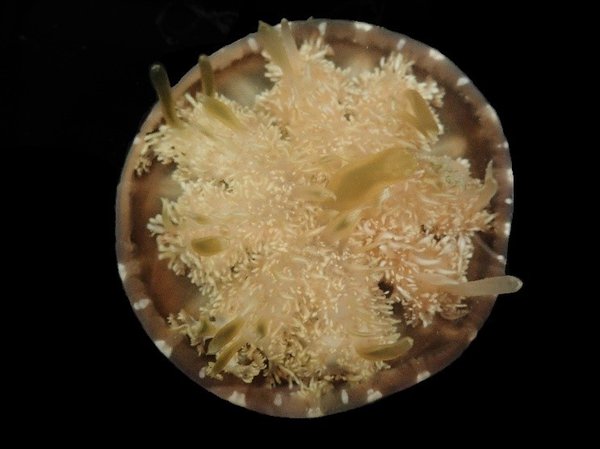 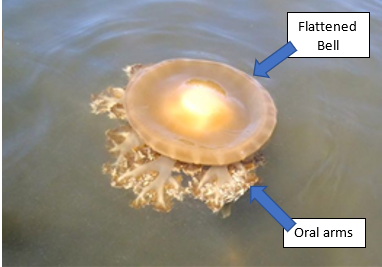 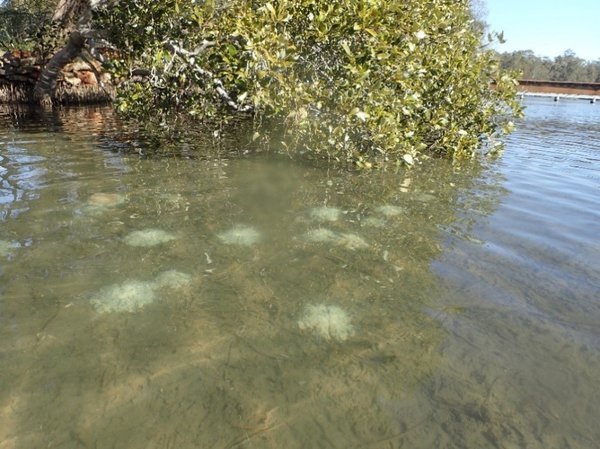 Upside-down jellyfish are usually found in sheltered coastal areas such as lakes, lagoons, or estuaries and are often associated with areas surrounded by mangroves. They typically occur in shallow water that is less than a metre deep so that there is enough sunlight for the zooxanthellae in their tissues.

Around Australia, upside-down jellyfish generally have a northern, tropical distribution, from Yampi Sound in north-western Western Australia to the Gold Coast, Queensland. However, multiple species have recently been recorded in temperate coastal lakes in New South Wales, including Wallis Lake, Lake Macquarie, and Lake Illawarra. There is also an additional population of upside-down jellyfish located near a powerplant outlet in Adelaide, South Australia, where the water temperature is raised 5–8°C above ambient.

It is unknown how long upside-down jellyfish live for in the wild, but in captivity, are known to live for up to four years. Populations in New South Wales appear from the middle of summer until the end of winter (January until August). It is unsure whether they disappear due to movement into deeper water or mortality caused by senescence, low water temperature, starvation, predation, or other factors.

The upside-down jellyfish has a symbiotic relationship with the zooxanthellae living in its oral arms. The algae are provided with shelter and in return the zooxanthellae provide the jellyfish with up to 90% of its nutritional needs, the other 10% coming from feeding on zooplankton. The jellyfish capture zooplankton by stunning them with stinging cells (nematocysts), located in their oral arms and using a mucus they release. They then consume the zooplankton through mouths located on their oral arms.

Other behaviours and adaptions

Whereas the upside-down jellyfish can swim like many other jellyfish, by pulsing its bell while in the water column, it is rarely seen doing this.

The adult stage of a jellyfish is called the medusa. The male medusae will release their reproductive cells into the water column, which will than fertilize the female’s eggs. The female will then release these eggs as planula larvae, which attach to a hard substrate such as mangrove roots or jetties, becoming what is called a polyp. The polyp stage looks similar to a small sea anemone, and when the water conditions are suitable, the polyp will go through asexual reproduction in a process called strobilation. This is the budding of the medusae stage from a polyp, and multiple medusae can come from a single polyp.

Upside-down jellyfish blooms have been recorded to reach up to 30 individuals per square metre. This can affect the surrounding environment by decreasing the oxygen content of the water and shifting the structure of the food chain by outcompeting other species and consuming a disproportionate amount of zooplankton. Additionally, upside-down jellyfish can sting swimmers, with the severity of the sting ranging from mild to severe.

How to treat an upside-down jellyfish sting 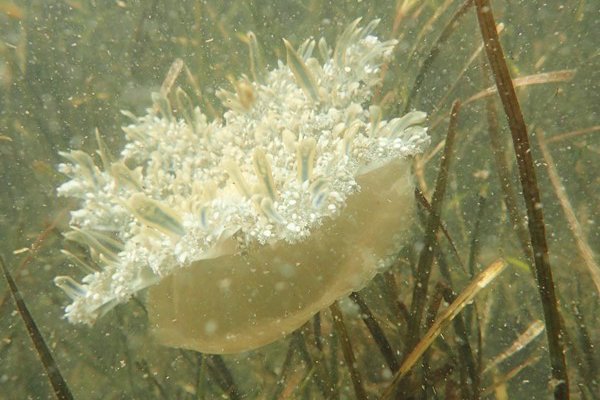 Claire Rowe outlines the fieldwork in southern Queensland to explore the taxonomic ambiguity of Cassiopea and determine the distribution and population dynamics of the jellyfish within Lake Macquarie. 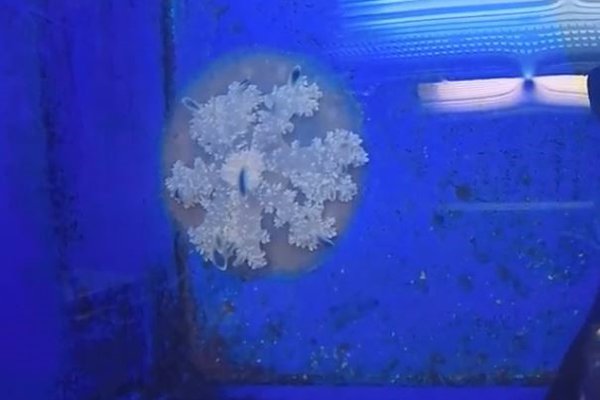 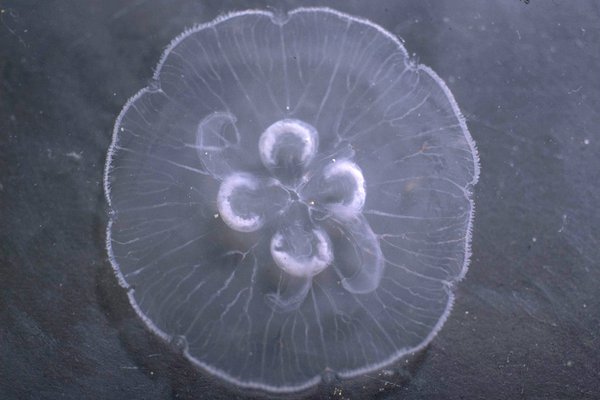 Review of the upside-down flies (Diptera: Neurochaetidae) of Madagascar and Africa, and evolution of neurochaetid host plant associations 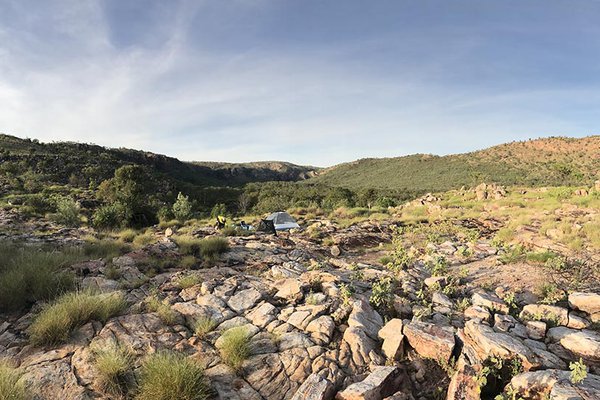