The Reef Stonefish can be superbly camouflaged, often looking like an encrusted rock or lump of coral. The species is widely distributed throughout tropical, marine waters of the Indo-Pacific. It has stout dorsal fin spines which can inject an extremely poisonous venom.

Reef Stonefishes are extremely well camouflaged, looking like an encrusted rock or lump of coral. Individuals are usually brown or grey and may have patches of yellow, orange or red.

The Reef Stonefish has thirteen stout dorsal fin spines which can inject an extremely poisonous venom.

They usually live on rubble or coral bottoms, often under rocks or ledges, but are also known to be able to bury in sand using their large pectoral fins.

The Reef Stonefish is widely distributed throughout tropical, marine waters of the Indo-Pacific. In Australia it is recorded from much of the Great Barrier Reef, Queensland, to far northern New South Wales.

The Reef Stonefish eats fishes and crustacea. It usually waits for prey to swim past, and then strikes with incredible speed. High speed camera equipment is required to record the feeding of this species.

The species is extremely well camouflaged and will not swim away when disturbed, but rather erects its poisonous dorsal fin spines.

Predators of the Reef Stonefish include sharks and rays. Jeff Johnson, Fish Collection Manager at the Queensland Museum stated:

The Reef Stonefish is the most venomous fish in the world. It has thirteen stout spines in the dorsal fin which can inject a highly toxic venom. The venom causes intense pain and is believed to have killed many Pacific and Indian Ocean islanders. No deaths have been recorded in Australia since European arrival (Underhill, 1987). An antivenom developed in 1959 further reduces the likelihood of death. Despite this, many people suffer the agony of a sting every year. Very hot water (not scalding) can be used to relieve the pain, but medical treatment should be sought.

"Stonefishes are considered to be the most dangerous venomous fishes in the world (Ghadessy et al., 1996). Stonefish venoms have both cardiovascular and neuromuscular toxicity.

To respond to the question regarding neurologic toxicity, the venom of Synanceia horrida releases a neurotransmitter, acetylcholine, from the neuromuscular junction, which is similar to the mechanism of action of the excitatory neurotoxin from black widow spider venom (Lactrodecuts spp.) (Church and Hodgson 2002 – as S. trachynis).

However, there are other mechanisms of action as well, which include cytotoxic, myotoxic and other effects."

Variability in polychaete recruitment at Lizard Island, Great Barrier Reef, a long term study and an analysis of its potential impact on coral reef ecosystems 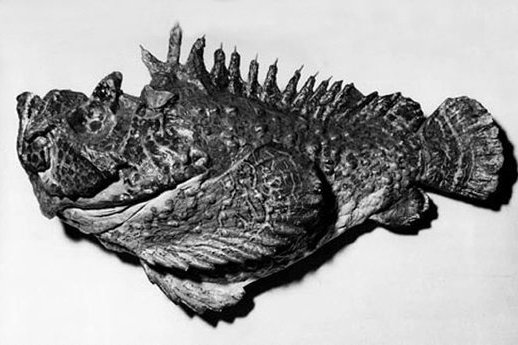