The Gulf Gurnard Perch has a 'hump-backed' appearance. The species only occurs in marine waters of South Australia and Western Australia.

The Gulf Gurnard Perch has a 'hump-backed' appearance, with the head profile rising steeply behind the eyes. It has large pectoral fins and two spines on the upper operculum. The long dorsal fin spines are separated by deeply incised membranes.

It is pale pinkish, red or brown usually with a large dark blotch on the body above the pectoral fin that extends into the spinous portion of the dorsal fin. There are smaller dark blotches posteriorly on the body and fins and often orange spots on the belly.

There are numerous spines and ridges on the head, which are important characters for distinguishing the Gulf Gurnard Perch from the eight other species of Neosebastes that occur in Australian waters. Other useful characters to help distinguish this species are the absence of a large black blotch on the soft rayed portion of the dorsal fin and the absence of dense black spots on the sides of the body.

It has been listed in many texts as N. panticus. Motomura (2004) stated that N. panticus is a junior synonym of N. bougainvillii.

It is a benthic species that occurs on rocky reefs most commonly below 50 m in depth.

It is endemic to Australia, occurring in temperate marine waters from eastern South Australia to south-western Western Australia. 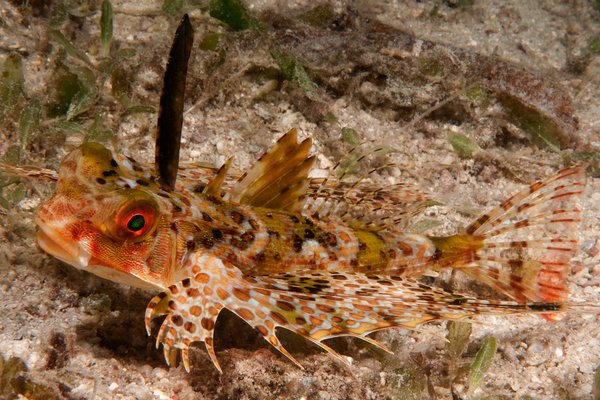