The Black-spotted Wrasse is endemic to Australia. It is usually seen on rocky coastal reefs and sometimes in sponge gardens.

The Black-spotted Wrasse is pink to red-brown dorsally with numerous small dark spots, and pale to yellowish ventrally.

Juveniles and females have a white bar and white-edged black spot on the caudal peduncle. These markings are not present in adult males.

The genus Austrolabrus is monotypic (it only contains one species).

It is usually seen on rocky coastal reefs and sometimes in sponge gardens.

The species is endemic to Australia. It is known from two separate populations; an eastern population ranging from northern to southern New South Wales and a western population from the eastern coast of South Australia to the central coast of Western Australia. 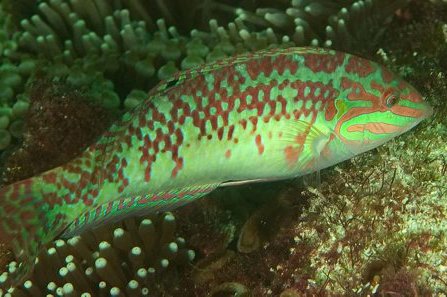