The Brown-headed Honeyeater is a small honeyeater with a short slender bill. It is plain olive green above, with a brown head marked by a pale line across the back, and is pale grey to buff below. It has a creamy yellow to orange eye-ring which completely encircles the dark eye. In young birds, the eye-ring is blue. This species is usually seen in flocks of five to fifteen birds foraging high in the tree canopy. It has an acrobatic flight and is always on the move.

The Brown-headed Honeyeater prefers open eucalypt forests and woodlands in all but the most arid zones and from the coast to subalpine areas. It is sometimes seen in parks and gardens.

The Brown-headed Honeyeater is found in coastal south-eastern Australia, from Queensland, mainly west of the Great Dividing Range, to New South Wales, Victoria and eastern South Australia, including the Flinders Ranges and the Murray-Darling Basin. It is also found in parts of south-western Australia, being widespread south of Point Culver through Menzies and Mt Singleton to Coburn and Peron Peninsula, but is rare in the far south-west or on the Swan Coastal Plain.

Some local movements within large home-ranges in response to food availability.

The Brown-headed Honeyeater feeds mainly on insects, but will also eat nectar. It usually forages in small flocks of six to twelve birds, mainly in the canopy, but also in lower shrubs, gleaning its food from bark, branches, leaves and flowers.

The Brown-headed Honeyeater will breed co-operatively if helpers are available, with up to five birds attending the one nest. These groups will normally contain a breeding pair plus adults or juveniles, all of which incubate the eggs and help to feed the young. The nest is a small deep cup made from fine bark, grass and hair bound with spiderwebs and slung by the rim in thick foliage 1 m to 6 m above the ground. Hairs are often gathered from live animals such as horses, cattle, humans, kangaroos and Koalas. Will also steal nesting material from other birds' nests. Young birds will probably remain with the family group from year to year.

The Brown-headed Honeyeater is adversely affected by extensive land-clearing, such as in the wheatbelt of Western Australia.

This honeyeater is the most widespread of Australia's eastern coastal rainforests.

The Yellow Wattlebird is Australia's largest honeyeater with the very distinctive yellow-orange wattles on the sides of the head. 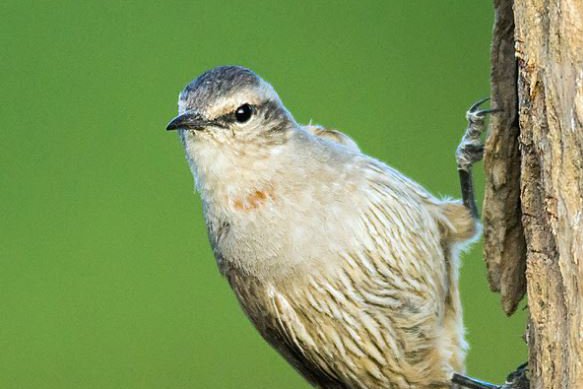 Melithreptus gularis
Discover more
Back to top
You have reached the end of the page. Thank you for reading.