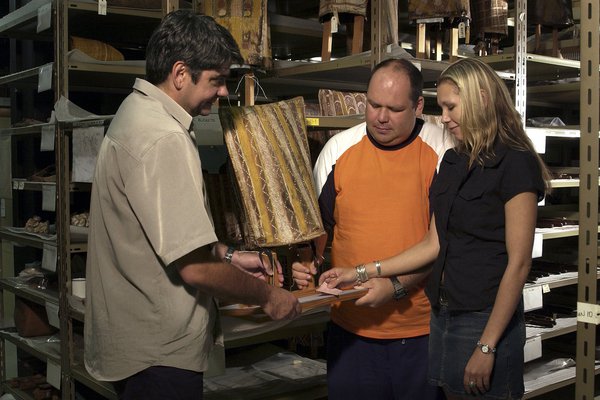 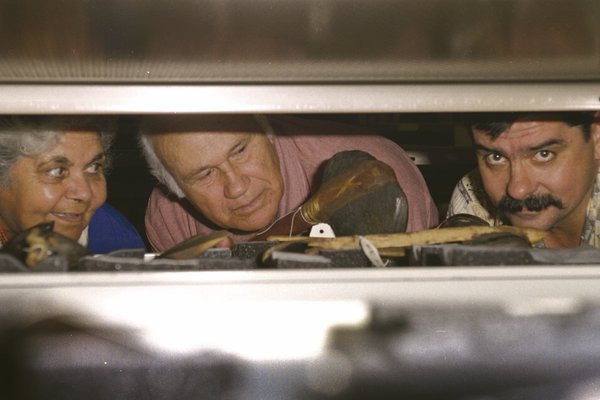 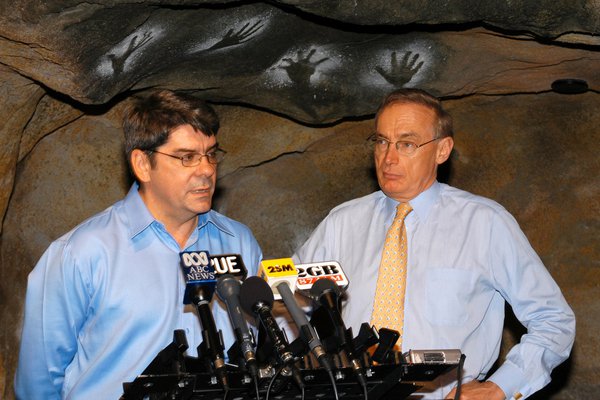 Listen to Phil Gordon talk about the early days of his employment at the Museum and the creation of the Aboriginal Heritage Unit.

I think I was very fortunate to be in that very exciting period of time when you know, intellectual frameworks were changing about how the collections should be used... Phil Gordon

Well, the early days of my employment at the Australian Museum were one of excitement I think, because it is an interesting place. And then to discover, you know, all this cultural property that was sitting there. I think, and there was a lot of vibrancy around the department. I mean, there was a lot of work being done in the Pacific with the newly independent nations of Vanuatu, and the Solomons and Papua New Guinea. There were people constantly coming from the Pacific into our collection. So there was a lot of new ways of thinking and attempting to make the collections relevant to Aboriginal and Torres Strait Islanders, and that was my role.

So I think I was very fortunate to be in that very exciting period of time when you know, intellectual frameworks were changing about how the collections should be used and that and the ownership of that collection, and people were starting to use terms like custodians of the collections. The museums were custodians of it, no longer the owners of it. So a lot of that early work we can see coming to fruition right around the organisation today with the First Nations Collections Group and all those sorts of things. I was certainly taken in and I think that overall the philosophical feelings around the place were very, very positive to people accessing the collections. We started to loan the collections to Aboriginal communities around New South Wales. Because my first permanent role was as liaison officer. So my role was to actually go out into communities and start making these contacts. And of course we also had the broader public service that was going through a very similar type of exercise such as national parks, the employment of Aboriginal sites officers. So there was a growing network within the public service too that saw the rights of Indigenous people as being important and people were working towards supporting Aboriginal cultural objectives by using the collections in many ways.

Well, the initial impetus for setting up the Aboriginal Heritage Unit was that while exhibitions and those sorts of things were important, they tended to be focused on this site, and our collection predominantly comes from Queensland and other places. And our collections predominantly come from places outside of New South Wales. So the thought was that there was this growing movement called Aboriginal Outreach - a keeping place movement. There was funding from ATSIC and so the initial theory was that people could access their cultural property in the museum and one way of doing that was to loan them the material for display purposes, for cultural renewal, all those sorts of things, but also hand in hand actually getting the information of the collections out there so we started the catalogues, which were simple ring binder catalogues of collections. So we did the northern New South Wales catalogue, there was the Brungle catalogue, and the whole view was to make these cheap and accessible that we could actually give to communities, and you know, everybody in the community could get a copy and they were just black and white photographs with listings of the objects and maybe a brief histories where there was history of those things. We then developed the CD, the DVD, which was Keeping Cultures, which was once again an attempt to use new technologies to support Aboriginal cultural objectives. And that was reasonably successful. I thought there were some really interesting things done in that period. I mean, we also amped up the repatriation. We had training in the Museum for the people doing collection management conservation, and we started the Aboriginal Keeping Place network, which we'd have annual meetings where we would bring speakers together to talk about various funding issues and those sorts of things.

Repatriation at the Australian Museum

Phil has been working to repatriate ancestral remains to communities for over 35 years. Listen to Phil discuss the history of repatriation in Australia and his time working on repatriation at the Australian Museum.

Well the repatriation program was basically the cornerstone of the development of any relationship with Aboriginal people. Phil Gordon

The issue of repatriation of Aboriginal remains probably goes back even further than the late '70s when the museum did its first repat[riation]. I mean there was the day of mourning in the 1930s and one of the demands of those, those people was to have their ancestors taken out of museums. It even goes further back than that. In Tasmania where communities down there were burying their people in unmarked graves because they were seeing the graves be disturbed and the remains sold.

But certainly in the 1980s there was a movement around museums, and not supported by all museums, to get ancestral remains returned. And initially the rules of repat were, if we could identify somebody as a known or named individual or somebody that had passed away in the last hundred years, then we could return. And of course we, we did stretch that quite often, but over a ten year period up into the '90s that that opposition certainly disappeared. And then there was the PPNO national policy on return which said that museums should return ancestral remains and could not put any vetoes on those returned, so they couldn't argue scientific value or anything like that. Back to the '90s then, we certainly, we amped it up a bit. I mean there was some federal money in the late '90s that came on board, which looked at supporting the issue of return of remains. But certainly national parks through their sites officers became very involved and this helped the logistics of return, because these sites officers knew the appropriate people in those communities who to talk to and those sorts of things, so it sped it up.

Well the repatriation program was basically the cornerstone of the development of any relationship with Aboriginal people. If we if we said no to that, then Aboriginal people we're going to say no to us for all our other projects, all our other consultation, the partnership and delivering exhibitions and those sorts of things. So it was pivotal, as I said earlier, the demand for the return of the remains goes back to the '30s, even prior to that. So it was pivotal in us building a relationship with the broader Aboriginal community. The repatriation has been the number one demand of people and we've met that, and we're continuing to meet that demand and if we hadn't have done that, our relevancy within Aboriginal communities would be zero. Pivotal to it all - if we hadn't have started returning, if we hadn't done it in good faith then our relationships with communities would be... well we wouldn't have relationships.

Repatriation on the international stage

At the end of 2019, Phil was re-elected for a second term as the co-chair of the Federal Government's Advisory Committee for Indigenous repatriation. Listen to Phil's thoughts on international repatriation and how Australia's position compares to other countries.

Australia stands way in front of many other countries, Western equivalent countries. I think our policies have evolved tremendously. Phil Gordon

The issue of Australia's position, in an international arena, on repat[riation]. I think Australia does stand up very well. We were certainly early in this in this field. But certainly, in an international sphere we're a world leader, I mean there's no equivalent. New Zealand has an international repat section within Te Papa I think, and that's funded by their central government. But our actual federal policy of repatriation, which is funded, and has extensive links into Europe and those sorts of things, is unique.

In the Americas, America, for instance, has NAGPRA, but that's an internal, like a lot of things in America it's internally focused, because their collections are so huge. You're talking tens of thousands of ancestors any one museum, and you multiply that by hundreds of museums. Japan's only just recently started to deal with their Ainu ancestral remains, and there's even talk about remains going back to Okinawa. But this has been a long haul. I mean, I've been involved in one committee or another dealing with international for 20 years, and you actually have to re-fight, every country you go to you re-fight the old war. They use the same arguments they used in Australia in the '80s, as a scientific importance, these people aren't related to these ancestors, we only need to do one more test, can we do some DNA and those sorts of things, and the new things.

But we broke the barriers in the UK. Germany's really opening up now. They're even talking about the, the genocide in Namibia, south-west Africa, German colony before the First World War. So there is a movement around the world of acknowledging the rights of indigenous people. And I think it's in this one sort of area that Australia can be very pleased with its relationships and with its long term policies. That doesn't mean we can't tweak them and we do tweak them quite regularly. And that's where we're hoping that we'll have a national resting place in Canberra for remains.

Quite often the provenancing of ancestors are not... there is no provenancing, they just say Aboriginal. Australian Aboriginal, west of the Darling River or things like that. And there is a, there is a plan and hopefully some government funding to set up an Aboriginal run facility in Canberra to house those ancestors until the broader Aboriginal community can come to grips with what to do with those ancestors. So yes, Australia stands way in front of many other countries, Western equivalent countries. I think our policies have evolved tremendously. We're now talking about DNA. We're talking about hair. All those sorts of things that, 20 years ago it was only about the ancestors coming back. And so these are the sorts of policies that the Federal Government's Committee on Repatriation is dealing with at the moment, and I'm involved in them.

Museums and Indigenous People in Australia: a review of Previous Possessions, New Obligations 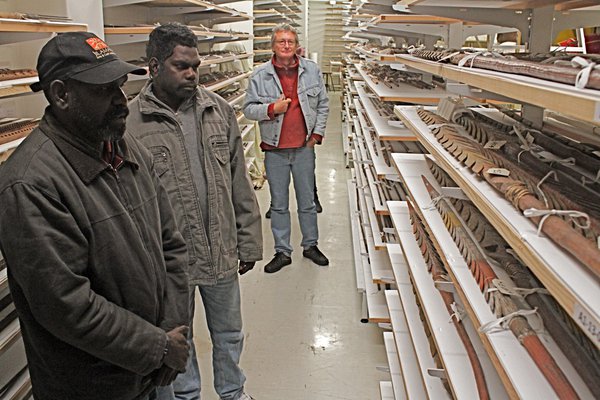 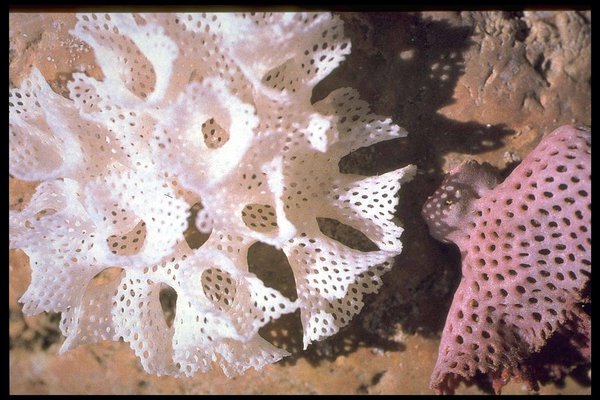 Lace Corals on the agenda

Australasian bryozoologists meet in Sydney for the first time. 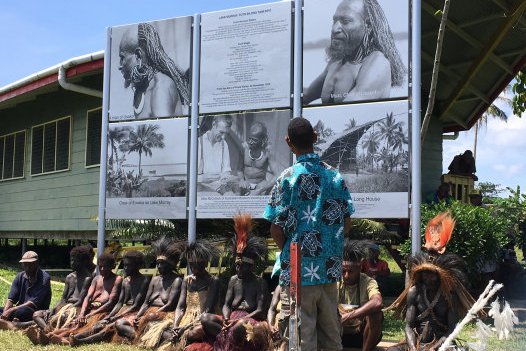 1980s: Repatriation - a significant step towards the future

In 1981 Anthropologists celebrated the ‘return to Vanuatu of an important ceremonial slit drum … one of only five surviving in the world’.

From Ignorance to Doubt: My first year in the Australian Museum