Bungaree became the first known Aboriginal person to circumnavigate Australia and contribute to the mapping of the Australian coastline.

A short man with a sharp intellect, Bungaree arrived in Sydney in the 1790s with the remains of his Kuring-gai mob, after conflicts with white settlers had escalated along the Hawkesbury River. He must have quickly made a mark in the fledging colony, as by 1798 he was employed on a 60-day round trip to Norfolk Island on the HMS Reliance, where he met the young English naval lieutenant Matthew Flinders. Flinders was so impressed with Bungaree’s friendly demeanour, intuition and bravery that the following year he took him on a coastal survey voyage to Bribie Island and Hervey Bay (Qld) on the 25-tonne longboat Norfolk. 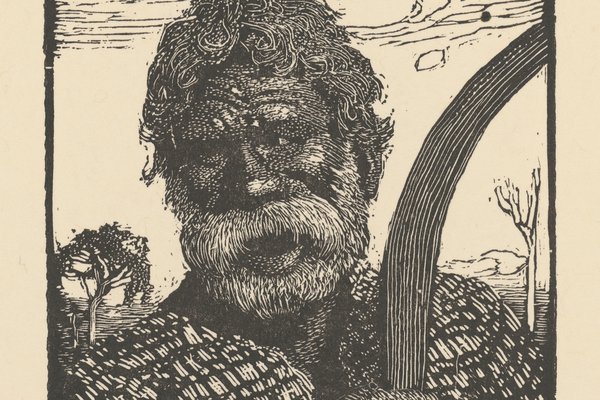 What makes a great Australian?

Bungaree was a brilliant diplomat and despite language barriers could quickly ascertain the wishes of the coastal Aboriginal groups they encountered. Flinders therefore used him again on his most exploratory voyage, the circumnavigation of Australia in the HMS Investigator, from 1802 to 1803. It was on this expedition that much of Australia’s unknown coastline was mapped.

Back in Sydney, Bungaree established a reputation as a brilliant mimic, imitating the walk and mannerisms of various governors and personalities. He was given fine clothing, including military cloaks and a hat. Governor Macquarie took a particular liking to Bungaree, and gave him both the fictitious title ‘King of the Broken Bay Aborigines’ and the first Aboriginal land grant, on Georges Head, where he briefly grew peaches and other produce.

In 1817, Bungaree sailed to north-western Australia with Phillip Parker King in the 76-tonne cutter HMS Mermaid, again showing his skill as a diplomat and intermediary between white and black people. He died in Sydney in 1830 and was buried at Rose Bay.

Many paintings exist of Bungaree in his European garb. He is also remembered through the naming of the Bongaree settlement on Bribie Island and, early in 2015, the naming of a walk at Mosman, Sydney, from Chowder Bay to Georges Heights, where his farm had been located.