Sapphire and ruby are gem varieties of the same mineral, corundum. They crystallise in the trigonal system. Although both are aluminium oxide, the addition of different trace elements gives the two varieties different colours. All colours of gem corundum except red are called sapphire. Red corundum is called ruby. Ruby owes its colour to traces of chromium in its structure, while sapphires derive their colour from trace elements such as iron, titanium and nickel.

In Australia, sapphire is found in a number of east coast localities, from north Queensland to north-east Tasmania. The largest and most economic deposits are found in the New England area, New South Wales, around Inverell and Glen Innes, and in central Queensland, around Anakie and Rubyvale.

Ruby is found at various sites in New South Wales, including the Macquarie and Cudgegong Rivers, Tumbarumba and the New England area. The most significant occurrence is near Gloucester, in the drainage of the Barrington volcano. The Barrington/Gloucester area has been fossicked and mined for gold, ruby and sapphire.

Rubies and pink sapphires are occasionally found in the New England area. 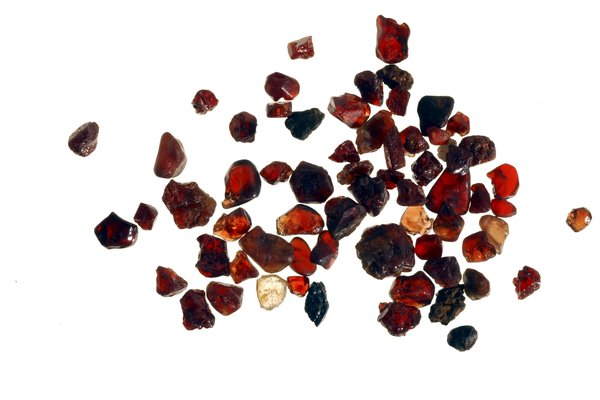 In many ways the future and relevance of museum collections often depend on their past. Some specimens remain in the collections for a long time, sometimes over 100 years before they prove vital for current research projects.