The story
This is a key episode in the Ramayana story, one of the most frequently depicted scenes in classical Balinese paintings. Rawana, demonic king of Langka, kidnapped the goddess Sita and kept her in captivity. After the fall of Langka and the death of Rawana, goddess Sita was reunited with her husband, Rama. But after such a long absence, Rama doubts her faithfulness. Distressed by Rama’s suspicion and in order to demonstrate her purity, Sita orders Laksamana, Rama’s brother, to prepare a pyre into which she jumps. However she is protected by Agni, the god of fire, and the fire turns into a lotus.

The scene
Agni can be seen in the centre of the paintings with Sita at his feet in a lotus floating on a pool of water. Both are enclosed in a golden aureole, which indicates a god. The servant figures, Twalen and Merdah are seated on the ground close to Sita. On the right, at the top of the ramp, from which Sita has jumped, are Trijata, Sita’s companion during her captivity, heavenly priests and monkey spectators. Hanoman, the monkey general, is below the ramp. Rama and Laksamana appear on the left of the tree with several gods above them and monkeys and other animal creatures below. Flowers descend from above, as a manifestation of Sita’s purity and favour with the gods.

About the paintings
Both these paintings were produced in Kamasan in the early twentieth century. Painting E074160 is attributed to artist Kak Lui, and the E074169 to Nyoman Laya. Although both paintings depict the same subject and the arrangement of figures is similar, if you look carefully several differences can be detected.

Painting E074169 has been hanged as a curtain suspended with kepeng (Chinese coins) used as curtain rings. A length of patterned fabric has been sewn along the bottom of the painting.

Explanations
Pyre is a pile of burning material, here a pile of wood on which a dead body is ceremonially cremated. The ramp, was a structure from which wives of deceased jump into the funeral pyre. Aureole is a border of light or radiance enveloping the head or sometimes the whole of a figure represented as divine. 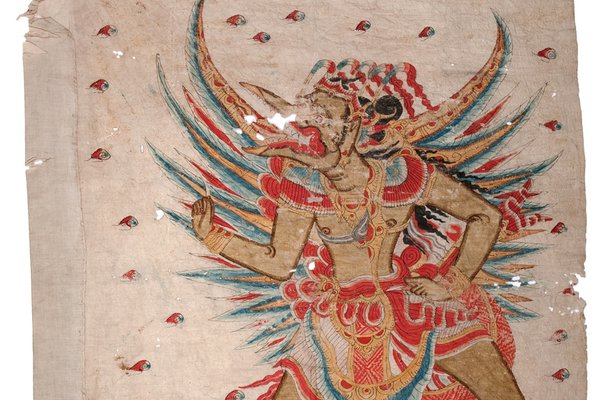 An artist, patron, witness and collector.