The massive Diprotodon optatum, from the Pleistocene of Australia, was the largest marsupial known and the last of the extinct, herbivorous diprotodontids. Diprotodon was the first fossil mammal named from Australia (Owen 1838) and one of the most well known of the megafauna. It was widespread across Australia when the first indigenous people arrived, co-existing with them for thousands of years before becoming extinct about 25,000 years ago.

Like many large living herbivores, Diprotodon was a heavily built, large-bellied quadruped. Its oversized skull, like those of other diprotodontids, was lightweight and filled with numerous air spaces. Some scientists believe that Diprotodon may have had a short trunk because of the retracted position of the nasal bones (bones of the snout).

Diprotodon, which gives its name to the order Diprotodontia, had two forwardly directed lower incisors, as do all other members of the order ('di' meaning 'twice'; 'proto' meaning 'first'; and 'odon' meaning 'tooth' in Greek). There are three upper incisors in each jaw in addition to the two lower incisors. There are four large, simple molars in each jaw, with two transverse crests (lophs) on each tooth. One premolar (the third) is retained; the others have been lost. Diprotodon belongs to the subfamily Diprotodontinae, which differs from the subfamily Zygomaturinae in part by having a simpler third premolar which in Diprotodon has a characteristic horseshoe-shaped crest in occlusal view. Diprotodon molars are also more high crowned, more rectangular and larger than those of the contemporaneous Zygomaturus. 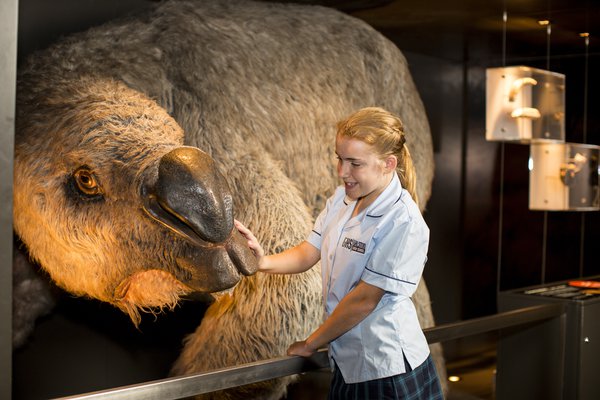 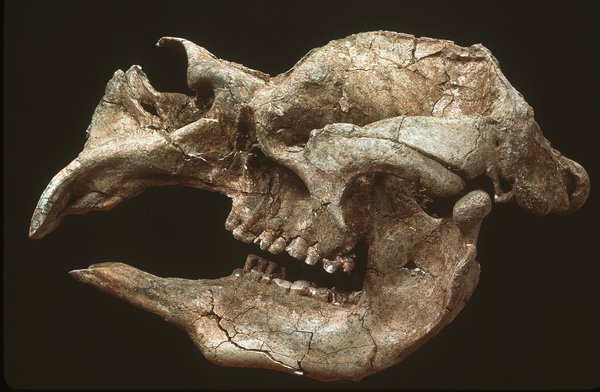 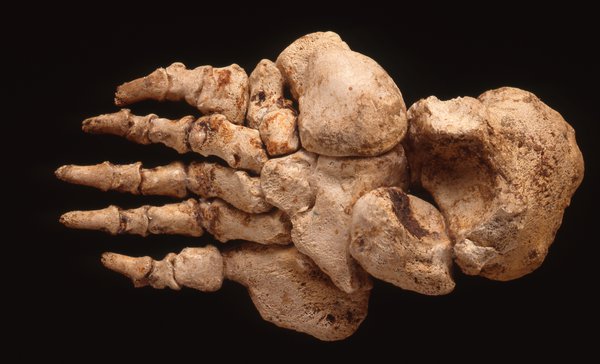 Diprotodon preferred semi-arid plains, savannahs and open woodlands, and is generally absent from hilly, forested coastal regions (where a smaller diprotodontid, Zygomaturus, is usually found). Diprotodon is known from some coastal localities, including Naracoorte Caves and Kangaroo Island in South Australia. However, these areas may have been further from the coast in the Pleistocene when sea levels were lower.

Australian Pleistocene habitats changed over time in response to the changing climate (termed the Pleistocene oscillations). Dry, windy conditions alternated with more equable conditions throughout this period, and sea levels were generally much lower than today as ice was locked in polar regions. Extended droughts would have made much of inland Australia uninhabitable; hundreds of individuals have been found at the centre of Lake Callabonna in northern South Australia, trapped in the mud as the lakebed dried out. On the Darling Downs in Queensland, one study of Diprotodon habitat has found that areas once covered in woodlands, vine thickets and scrublands gave way to grasslands as the climate became drier.

Diprotodon is known from many sites across Australia, including the Darling Downs in southeastern Queensland; Wellington Caves, Tambar Springs and Cuddie Springs in New South Wales; Bacchus Marsh in Victoria; and Lake Callabonna, Naracoorte Caves and Burra in South Australia. Diprotodon is not known from New Guinea, southwestern Western Australia, the Northern Territory or Tasmania (although it was present on King Island).

Diprotodon has been found in a wide variety of fossil deposits that represent forests, woodlands and plains. One skeleton from Lake Callabonna had the remains of saltbush in its abdominal region. Diprotodon may have eaten as much as 100 to 150 kilograms of vegetation daily. Its chisel-like incisors may have been used to root out vegetation.

It is unlikely that Diprotodon moved in large herds, as sometimes depicted. Marsupials are not known to form large groups. The large numbers of individuals found at Lake Callabonna were probably smaller family groups drawn en masse to the drying waterhole.

In Diprotodon, one sex (probably male) was considerably larger than the other (probably female). There was therefore a high degree of morphological difference between the sexes ('sexual dimorphism'). In living sexually dimorphic mammals, breeding is usually polygynous (males mate with multiple females over the breeding season). Diprotodon may also have used such a breeding strategy.

There is some evidence of either predation or scavenging of Diprotodon by the Pleistocene 'marsupial lion', Thylacoleo carnifex: a forelimb bone (ulna) from near Glen Innes, New South Wales was found with deep, blade-like tooth marks matching those of Thylacoleo (whose teeth were also found at the site).

The oldest fossils of the genus Diprotodon come from late Pliocene deposits at Lake Kanunka, South Australia and Fisherman's Cliff, New South Wales. Diprotodon optatum is known from the Pleistocene, becoming extinct at about 25,000 years ago. Complete skulls and skeletons as well as hair and foot impressions have been found. There is also a trackway preserved at Lake Callabonna.

The most complete specimen is the skeleton of a very large individual found at Tambar Springs in NSW and excavated by Australian Museum palaeontologists. It is now part of the Australian Museum fossil collection and is on display at the Coonabarabran Visitor Centre in central New South Wales. On one rib, there is a small, square hole tentatively identified as having been made by a spear while the bone was still fresh. This is one of the few pieces of evidence that humans may have hunted Diprotodon.

Exact reasons for the extinction of Diprotodon remain unclear. It seems to have co-existed with Aboriginal people for over 20,000 years, so the 'blitzkrieg' model (extinction upon the arrival of humans) does not hold for Diprotodon. Human activity may have had an effect, either through habitat change ('firestick farming') or perhaps via a slow decrease in numbers through selected hunting of juveniles. Aboriginal people did not have 'big game' weapons, and most likely did not target adult Diprotodon. Climate change may have also been a significant factor. During the Pleistocene, Australia experienced droughts that were much worse than today's, and much of inland Australia was barren, inhospitable and waterless.

The Bluff Downs Euryzygoma is a large, cow-like diprotodontoid marsupial that browsed leaves and shrubs in a variety of habitats, from wetlands to dry forest and woodlands.