Spotted ground spiders are from 6 mm to 20 mm long. They are usually dark-coloured (reddish to black), and sparsely haired. Legs are orange to red or black and white. They have two to five pairs of white or coloured spots on the dorsal surface of the abdomen that can range from pale yellow to bright orange. When present, an unpaired spot occurs just above the spinnerets. A characteristic feature of Storena is that they have a pale brown, pitted circle of bare cuticle between the front spots. The eyes are in two back-curved rows of four. One species of Storena is an ant mimic, resembling the red meat ants, Iridomyrmex purpureus. They mingle with the ants in their nest in the early mornings, when the ants are sluggish, and carry off the weaker ants as prey.

Spotted ground spiders don't build a snare, but hunt and ambush ground dwelling insects. Like many spiders, little is known about their biology. Some species build burrows in the ground or shallow depressions, and build a palisade (fort-like structure) of vertically arranged twigs or leaves around the entrance. Some species, like Habronestes bradleyi, are closely associated with ants.

Male spotted ground spiders live a vagrant life hunting or searching for females; they may be found in leaf litter, under logs or rocks, or even indoors wandering across the floor. In contrast, the females have rarely been observed far from the burrow. The oval egg sacs have a papery texture, and hold about 50 eggs.

Wandering males frequently enter houses at night, and their bright colours can cause alarm. The males also have characteristic club-shaped palps and can look quite threatening when these are held aloft. Despite the heavy appearance of their fangs, these spiders are reluctant to attack and timid when confronted.

Few bites by these spiders have been reported and when they have, symptoms have been minor, consisting of a red welt and localised hot feeling for a couple of hours. They are not considered dangerous. 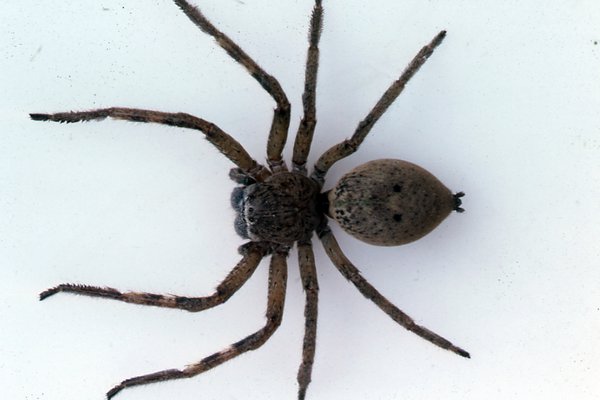 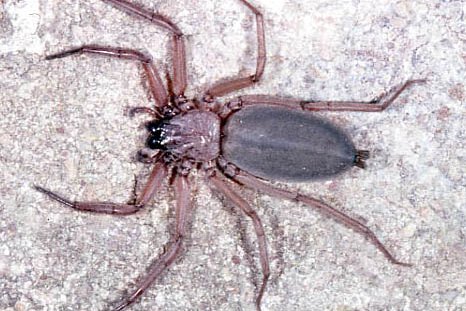 Lycosa furcillata
Discover more
Back to top
You have reached the end of the page. Thank you for reading.