The Australian tarantulas belong to four genera, Selenocosmia (four described species), Selenotholus and Selenotypus (with one species each), and Phlogiellus(undescribed species) in the family Theraphosidae. They have a large, heavy body, which varies in colour from dark chocolate-brown to pale fawn, often with a silvery sheen. Selenotypus plumipes is the only species that has long hairs on the rear legs, making it easily identifiable. However, it can be difficult to identify the other Australian tarantulas to species with many species as yet undescribed.

Adult female Australian tarantulas live in web-lined burrows in the ground. Younger stages and males may use flimsy silk retreats under rocks and logs. The burrows may have a flange of grass or leftover soil from burrow excavation around the outer rim. Some burrows may even have a thin film of web around or across the entrance. Burrow size usually correlates with the size of the spider, however the depth of the burrow can vary considerably (40 cm -100 cm deep), without relation to the size of the occupant. The temperature of the burrow remains fairly constant, with the minimum temperature for activity (20 degrees C) only being exceeded during the months of September to May, which is the feeding and growth season for these spiders. Burrows are sometimes plugged during the colder months and during the hottest part of summer.

The genus Selenocosmia is known from Queensland, New South Wales, South Australia and Western Australia. Selenocosmia stirlingi is the most southerly (reaching into north-western Victoria) and widely distributed species. It spans the continent in habitats ranging from rainforest to desert but is not found in the northern tropics. The species that is most often kept as a pet is often sold as Selenocosmia crassipes.However, many of the large petshop spiders come from the north Queensland areas around Cairns and are incorrectly identified. They are likely to be undescribed species of the Asian genus Phlogiellus. Selenocosmia crassipes has its main distribution further south in mid-east Queensland.

Selenotholus and Selenotypus are found in north-western Queensland and the Northern Territory respectively.

Australian tarantulas rarely eat birds, despite often being called 'bird-eating spiders'. Occasionally, hatchlings may be taken from nests on the ground, however the spiders mainly eat insects, lizards, frogs, and other spiders.

Selenocosmia stirlingi, like other theraphosid spiders, sometimes constructs a cradle or hammock of webbing on which the spider lies when moulting. Moulting takes place with the spider lying on its back, and can take from under one hour in spiderlings up to several hours for large mature females. Growth depends on the availability of food and moisture, with tropical species generally reaching maturity more quickly and in fewer steps than species with less reliable food and water supplies. Females continue to moult when sexually mature, while males will not moult again once mature. Males can be distinguished by their swollen palps (pair of front sensory/mating organs).

Australian tarantulas are often known as whistling or barking spiders because of the sounds most species can produce by rubbing rows of modified spines on the basal segments of their palps (front pair of limb-like sensory/mating organs) against opposing spines on their jaw bases (the stridulating organ). The whistling or humming noise is most readily produced when the spider is disturbed and takes up a threatening defensive pose - it may act as a deterrent against predators.

The female lays about 50 eggs into a 30 mm diameter sac, which is stored in the burrow and protected by a tough cover of silk. The spiderlings moult once within the egg sac before leaving it via a single hole. They will moult again before leaving their mother's nest as free-living individuals. Spiderlings have been observed feeding upon an insect provided by their mother, indicating some degree of maternal care in this species.

Females may live up to twelve years, but the males usually die after mating at around five years of age. Females tend to be larger than males.

The female Australian tarantula spends most of her life in her burrow. During spring and early summer, males approach the females' burrows, enticing them out to mate at the entrance. The male has to signal to the female that he is not potential prey, by drumming his palps (mating organs) on the ground and on the female's carapace (hard outer body covering). She will rear up in an aggressive stance while the male advances upon her, pushing her further backwards. He then inserts his palps one by one into the female's genital opening, before retreating. Attacks on the males have not been observed, and the males of Selenocosmia stirlingi do not possess spurs to secure the female's fangs while mating (as found in other tarantula species and unrelated groups like Funnel-web SpidersThis may indicate that males are much less likely to be killed during the mating process than the males of many other spider species.

There is growing concern that collecting these spiders for the pet trade may have a negative impact on populations of Australian tarantulas in northern Queensland. By removing the large adults from small local populations, collectors may be inadvertently endangering species that have not been properly studied or described yet and which may have limited distributions. A few traders are developing captive breeding programs to supply the pet market. This should be encouraged in the interests of conserving these fascinating spiders.

Although large, Australian tarantulas are not usually aggressive, but if provoked will 'rear up' and appear rather menacing. The bite is painful, as the fangs are large and as long as those of many snakes. Severe illness sometimes results and nausea and vomiting for six to eight hours have been reported from bites. It is possible that the growing popularity of keeping these spiders as pets may be responsible for an increase in reported bites. People who keep Australian tarantulas as pets must not attempt to handle them and should be very careful when cleaning their containers. 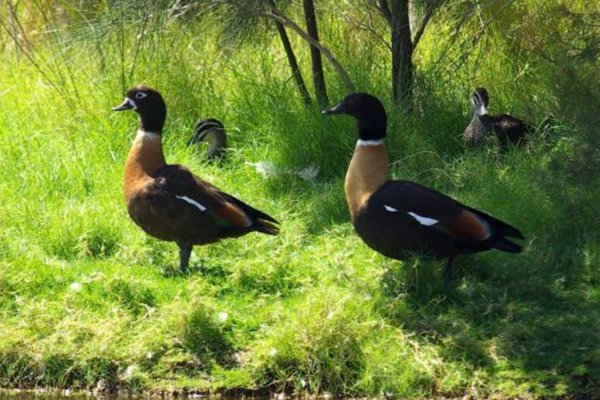