The Rough-scaled Snake has a slender to medium build, with a large head distinct from the body. Its back, sides and tail range in colour from brown to olive to dark brown, with dark transverse blotches or stripes predominantly across the anterior body (may be indistinct in older individuals). The body scales are quite long and thin, strongly keeled, and matt in appearance. The head is glossy, unpatterned, and slightly darker than the body. Eyes are large and tan brown in colour, and the pupil is round with a coppery brown rim. Tongue pink.

The ventral surface can be cream, yellow or olive, often with darker blotches.

Rough-scaled Snakes prefer to live in moist habitats ranging from rainforest, wet sclerophyll forest, and open forest, to shrubland, heathland, and artificial grassland (usually in close proximity to a swamp or watercourse). They may also be found in disturbed areas if these are adjacent to relatively undisturbed habitat. The snakes shelter in tree hollows, cavities and crevices, and in epiphytic ferns, e.g. staghorn ferns.

The species occurs in two widely separated regions of the Australian east coast: in the tropics between Mossman and Tully in northern Queensland, and further south between the New South Wales central coast and Fraser Island, Queensland. Altitudinally, they can range from sea level to about 1100m.

Despite being mostly active at night, the Rough-scaled Snake does bask during the day and it will do so throughout the year.

In the wild, the snake eats a variety of vertebrate prey, including frogs, lizards, birds and mammals. Examination of museum specimens revealed that frogs and mammals were most commonly consumed. Rough-scaled Snakes may also eat carrion in the form of dead frogs on the road.

Prey is actively hunted or ambushed during the evening and at night; either in vegetation or on the ground.

In captivity, the snake will eat mice.

Rough-scaled Snakes are primarily crepuscular to nocturnal, and are often encountered crossing the road at night, especially on rainy nights in summer. In cooler weather they may become more diurnal in behaviour, and are sometimes seen on sunny days basking in low vegetation or on a log or bank.

Although terrestrial, they will readily hunt and shelter in low vegetation and trees, climbing to heights of at least 5m. This climbing behavior is rare amongst Australian elapid snakes.

Observations of captive snakes suggest that mating may occur from mid-spring to late summer. Gravid females can be found in the period late spring to late summer (December - March). The species is live-bearing and females give birth to 5-18 (average 10) large offspring in late summer. In museum collections the low frequency of gravid females and females with enlarged follicles collected during the reproductive season suggests that females may breed less than once every year.

The Rough-scaled Snake is a shy and extremely nervous snake, and will vigorously defend itself if cornered. A defensive snake will raise its forebody in an S-shape, with the head pointing directly at the offender and the mouth slightly agape. It hisses loudly and explosively and, if approached too closely, will strike out and bite repeatedly before trying to escape. The Rough-scaled Snake has relatively large fangs and highly toxic venom with coagulant, neurotoxic, haemolytic and cytotoxic properties. One human fatality has been attributed to this species, and anyone suspected of being bitten should seek urgent medical attention.

DNA sequence data suggests that the species is most closely related to the Tiger Snake, Notechis scutatus. 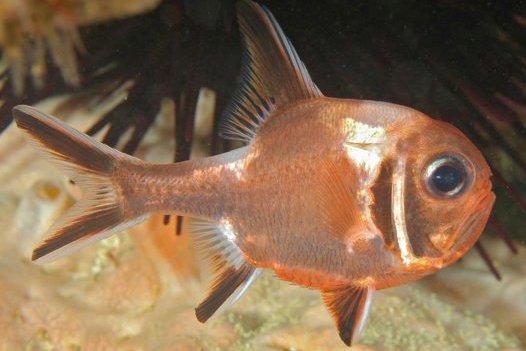 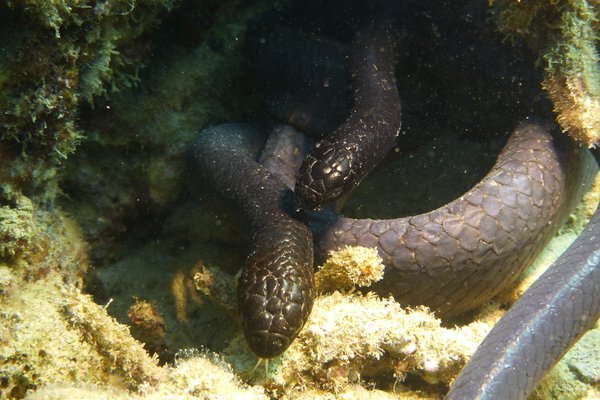 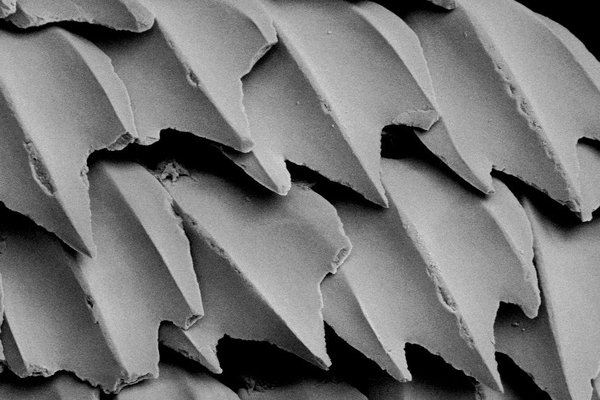 Placoid scales are found in sharks and rays, and can vary greatly in external appearance.