The Yellowtail Kingfish occurs in tropical and temperate waters of the southern hemisphere and the northern Pacific. The common name for this species comes from the conspicuous yellow caudal fin.

Scientific name - Seriola lalandi
seriola - feminine diminutive form of "seria", a large earthenware pot (Latin). Meaning of name uncertain.
lalandi - named after Monsieur de Lalande, the naturalist who first informed Valenciennes of the existence of this species. The person who supplied Valenciennes with the first specimen, M. le duc de Rivoli, has another fish in the same genus named after him, the Highfin Amberjack, Seriola rivoliana.

The family Carangidae contains approximately 140 species in 32 genera. Twenty three of the genera and 62 species are found in Australian waters, with four genera occurring regularly along the coast of the southern Australian states. These are the Naucrates, (the Pilot Fish), Pseudocaranx, Trachurus and Seriola. Four species of Seriola are known from Australian waters.

Yellowtail Kingfish have elongate, compressed bodies and very small, smooth scales. The torpedo-shaped body is referred to as fusiform. The body tapers posteriorly to a narrow caudal peduncle and broadens to a large forked caudal fin. This fin with its "scooped-out" centre has a small surface area with respect to the large span. This results in little lateral displacement of water and turbulence, but provides efficient power for swimming. The combination of carangiform swimming and body shape make the Yellowtail Kingfish a very swift swimmer.

The Yellowtail Kingfish is a pelagic, schooling fish, usually seen as adults in small to large numbers. In general they inhabit rocky reefs and adjacent sandy areas in coastal waters and occasionally enter estuaries. They are found from shallow water down to depths of around 50 m, although have been caught from over 300 m.

Young fish up to 7 kg are known to form shoals of several hundred fish. They are generally found close to the coast, while larger fish are more common around deep reefs and offshore islands.

Juvenile Yellowtail Kingfish are are rarely seen, as they are often found far from land associated with floating debris or weed which provide camouflage. Juveniles are yellow with black bands. This colouration fades as the fish ages and by about 30 cm in length the fish has assumed its adult colouration.

The Yellowtail Kingfish occurs in tropical and temperate waters of the southern hemisphere and the northern Pacific. In Australia, it is recorded from North Reef, Queensland (23o11'S) to Trigg Island, Western Australia (31o52'S), and as far south as Tasmania.

The Yellowtail Kingfish is a powerful swimmer that is adapted to a pelagic lifestyle. The species is commonly seen by scuba divers, and is prized by anglers. A mode of swimming known as carangiform swimming is named after the family. It involves very little movement of the head by considerable movement of the tail.

Over 50 percent of the world's fishes school as juveniles and about 25 percent school as adults. Being part of a school lessens the chances of an individual being attacked by a predator. Faced with a school of moving fishes predators sometimes find it difficult to "lock-on" to an individual and may miss, delay or abort an attack.

Yellowtail Kingfish are often seen schooling as young fish. Small organs called neuromasts give schooling fishes the ability to co-ordinate their movements simultaneously. A row of these organs running along the side of the body, is commonly referred to as the lateral line.

The neuromasts consist of sensory cells which have 'hairs' embedded in gelatinous cups, called the cupula. These organs are found separately on the body surface of the fish, or in lateral line canals sunk into the body and opening by pores through the scales.

It is presumed that a moving object, such as another fish in the school, causes a change of pressure in the water that is detected by the neuromasts and sensed by the fish's nervous system. The fish can then tell which way to move and at what speed. The lateral line therefore gives fishes a distant touch sense, to detect, and react to an object moving at some distance away in the water. Not only can the fish detect direction and velocity of the object, but possibly even the size as well.

The receptors in the lateral line have similarities with the inner ear in humans. Both are considered to be acoustic displacement receptors.

Many fishes that swim in open water are countershaded. This adaptation results in the fish being difficult to see from above because the dark colour of the dorsal surface of the fish blends into the dark colour of the water below. It also helps to make the fish less visible from below because the light colour of the underside of the fish is less noticeable against the light shining from above. More recently it has been suggested that countershading in fact renders the fish less visible when viewed from the side. Light striking the upper surface of the body casts shadows on the pale underside of the fish. The darker upper surface thus 'blends' with the shadow-darkened lower surface giving the fish an overall dusky appearance that is less visible against the background. 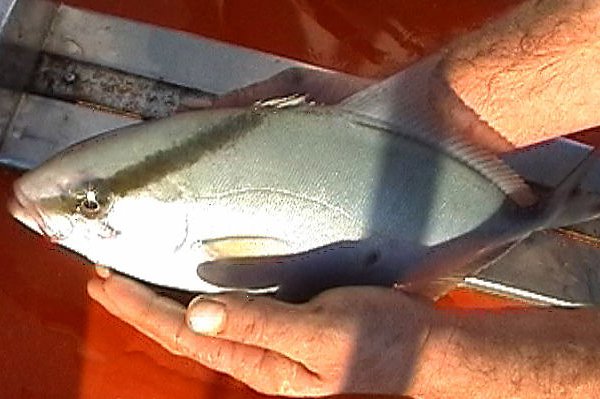 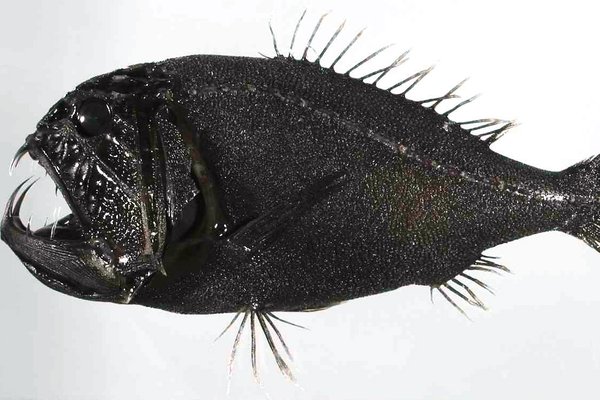 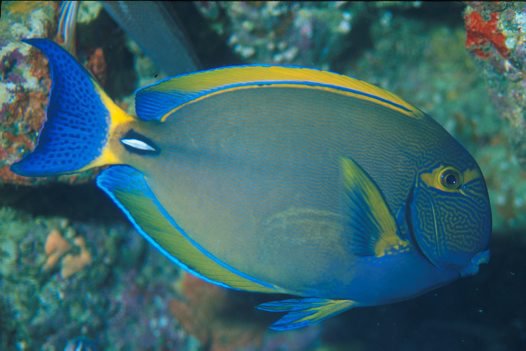 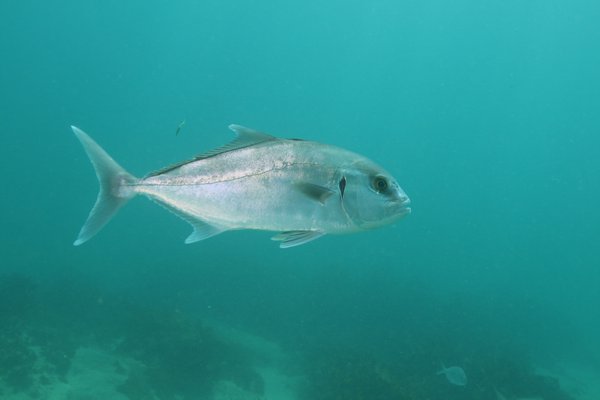