The Spotted Garden Eel can be recognised by its colouration. Individuals live in sandy burrows near coral reefs.

The Spotted Garden Eel has a white body covered in small black spots. There are three prominent black patches located on the body. One surrounds the gill opening and pectoral fin, the second is half way along the body and the third surrounds the anus. Juveniles are entirely black.

It is usually seen on sandy bottoms near coral reefs at depths of 15 m to 45 m.

This fish lives in sandy burrows, which they construct. When feeding, the Spotted Garden Eel rises out of its burrow, exposing up to two-thirds of its body. It feeds on zooplankton taken from the passing current.

The Spotted Garden Eel occurs in tropical marine waters of the Indo-Pacific region, from East Africa, north to Japan, south to New Caledonia and east to the Pitcairn Islands. In Australia it is known from the Great Barrier Reef, Queensland.

When disturbed the Spotted Garden Eel retreats backwards into its burrow.

Spotted Garden Eels stay in their burrows when spawning. Potential mates stretch over from adjacent burrows and entwine bodies.

The species was not discovered until SCUBA diving became popular. Since then colonies of hundreds or thousands of individuals have been reported. 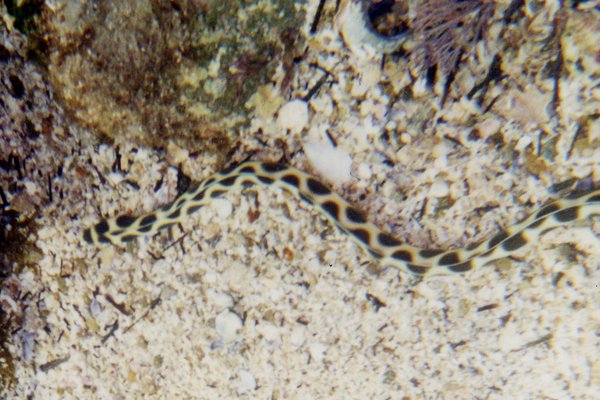