The Luderick is a very common coastal species in New South Wales waters. The species name, tricuspidata, refers to its flattened three-cusped teeth. The movie, below, shows one of the annual Luderick spawning aggregations at the Sand Pipe, Gold Coast Seaway, Queensland. The males have adopted a pale body colouration with a dark head. They are closely following the 'ripe' females that have retained the 'normal' barred body pattern.

The Luderick can be recognised by its evenly arched dorsal and ventral profiles, small mouth and eye, large tail, and colour pattern. In marine waters it is bluish-grey, whereas in estuaries it is a darker grey to brown. it has 11 or 12 thin tapering bars on the side of the body, which fade to silvery below. 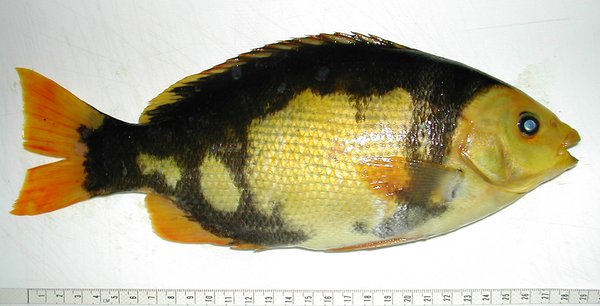 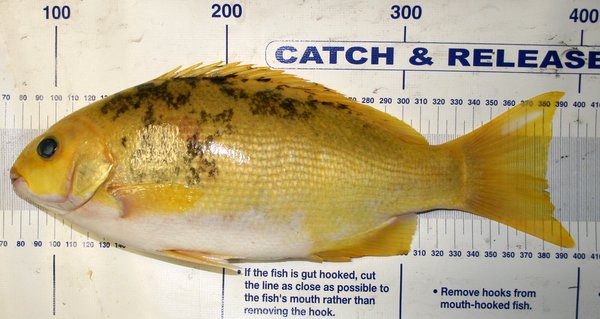 Adults live in coastal and estuarine waters down to a depth of 20 m. They are often seen in large schools. Larvae are found in estuaries primarily in seagrass beds and also in rockpools. Juveniles move into mangrove-lined creeks and estuaries during their first year. The species is commonly seen by divers and snorkelers in shallow rocky reef areas.

The Luderick is recorded from southern Queensland to central South Australia, including northern Tasmania. It is only rarely encountered, however, away from the east coast.

Luderick feed mainly on algae which they graze off rocks or floating material. The video below shows a school of Luderick feeding.

The species breeds offshore and the juveniles move into the sea grass beds in estuaries. After a few months the young fish move back to the sea or in deeper parts of estuaries.

The Luderick is a popular angling species in New South Wales.