The Superb Lyrebird looks like a large brown pheasant. The wings are rufous in colour and the bill, legs and feet are black. The adult male has an ornate tail, with special curved feathers that, in display, assume the shape of a lyre. The tails of females and young males are long, but lack the specialised feathers.

Moist forests. It is a ground-dwelling species in moist forests, but roosts in trees at night. Birds are sedentary, rarely moving large distances and generally staying in a home-range about 10 km in diameter.

Superb Lyrebirds feed on insects, spiders, worms and, occasionally, seeds. It finds food by scratching with its feet through the leaf-litter. Birds tend to forage alone, but females and young males may be seen feeding together.

The Superb Lyrebird's song is somewhat famous. About 80% of the song consists of expert mimicry, with both and joined together in a rousing medley. Sounds can include anything heard in the bird's immediate surroundings, such as chainsaws, car engines, dog barks and local native birds. The Superb Lyrebird also emits a series of whistles and cackling notes that are used as territorial calls, as well as a loud alarm shriek.

Superb Lyrebirds breed in April to October each year (the season is slightly shorter in the north of its range). The male secures a territory, attracting potential mates by singing and dancing on one of several mounds within it, while throwing the tail forward over the body and shaking it in display. The male will mate with several females. The female alone builds the nest, incubates the eggs and cares for the young. 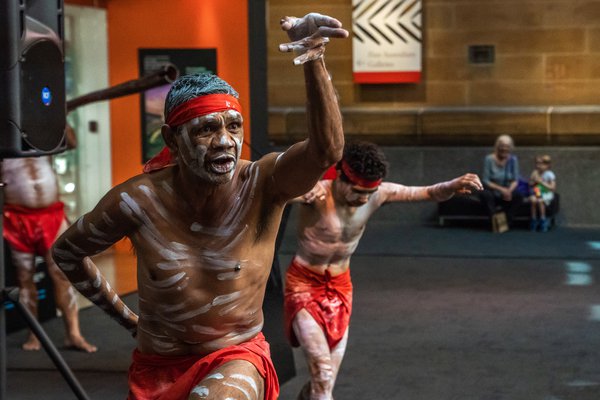 Many Aboriginal communities have been painting their bodies for thousands of years. For these communities, body painting is not necessarily just about visual artistic creativity, it relates to conventions, laws and religion.