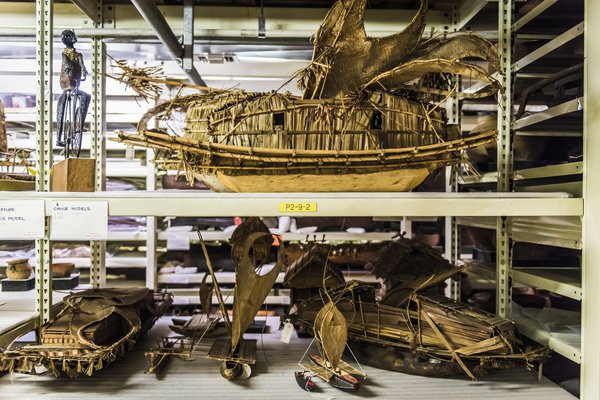 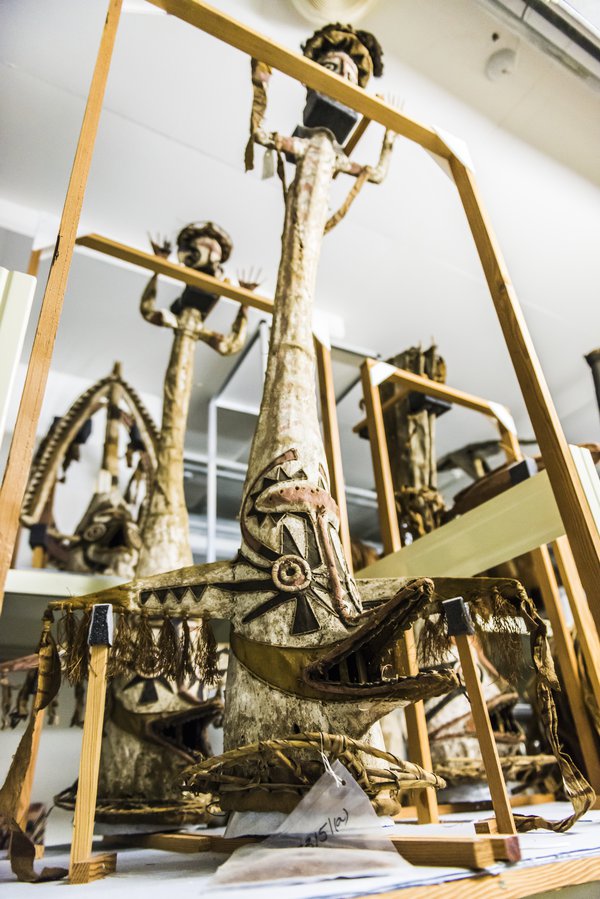 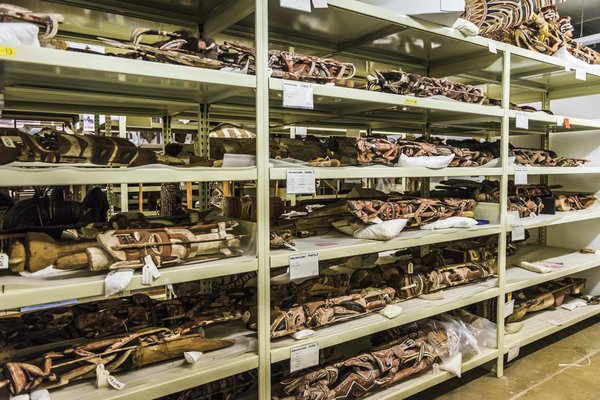 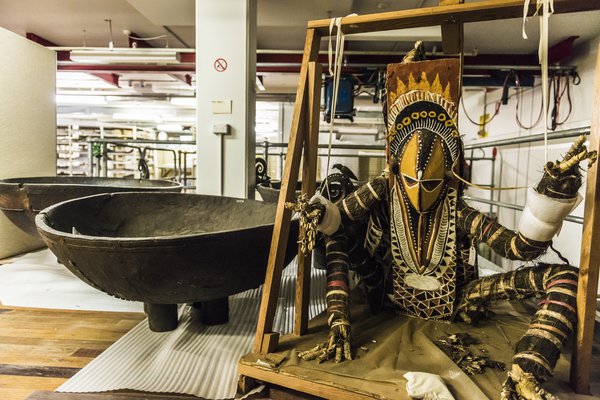 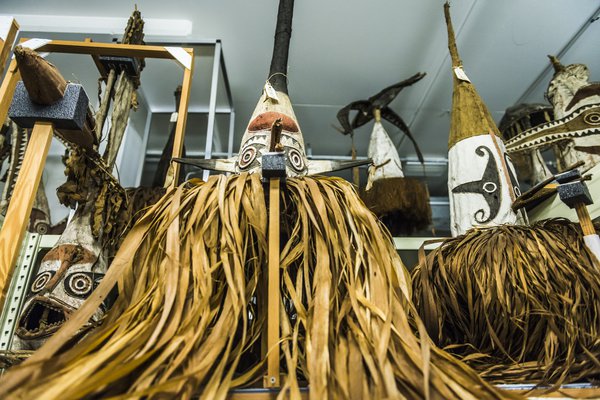 The Australian Museum holds one of the largest and most significant collections of Pacific material in the world.

The majority of the 60,000 objects comes from the Melanesian nations of Papua New Guinea, the Solomon Islands, Vanuatu, Fiji and New Caledonia, with representative collections from Polynesian and Micronesian nations (including New Zealand, Tonga, Samoa, Tuvalu, Cook Islands, Easter Island, Hawaii, Niue, Tokelau, Wallis and Futuna and French Polynesia in the former and Banaba, Betau, Federated States of Micronesia, Kiribati, Marshall Islands, Nauru and Northern Marianas Islands in the latter).

The Melanesian objects hold great cultural and historical significance within the Australian Museum’s Pacific collections. Their range of fascinating artistic and cultural styles is well represented, with many of the pieces collected in the late 19th and early 20th centuries. Many examples are no longer made but of great continuing significance to communities.

Melanesian art and objects exhibit an extraordinary range of functions, styles, materials and motifs. This is due mainly to the diversity of cultural groups within the region and the relative isolation of areas for many millennia. However, these cultural groups share an underlying belief system about humans and their place in the universe that impacts on the purpose and symbolism of the pieces they create.

There is an animistic element underlying all Melanesian belief systems – everything, both animate and inanimate, had an eternal spiritual essence. In addition, the spirits of the living and the dead could be identified with the spirits of certain animals.

Manufacture, use and appearance of art objects closely followed these religious beliefs and clan rituals. Spirits – ancestral, natural, mythical and deceased – were portrayed in masks and sculpture. Honouring ancestors was a dominant theme involving controlling the forces of the dead and reliquary items were added to objects to increase their power – objects helped retain the support of the group’s ancestors. Artistic expression was thus concerned almost exclusively with portrayal of human and animal figures, in varying degrees of stylisation.

The majority of traditional societies were based on an egalitarian social structure which was patriarchal and patrilineal. This extended to Melanesian belief systems which were almost entirely the concern of the men. Most of the objects were created by men for important ceremonies, in particular the cult of ancestors was a secret one and boys only were initiated into it when they reached puberty.

After the ceremonies, artefacts were either destroyed to protect them from uninitiated eyes or concealed in men’s cult houses. Less portable objects were made specifically for the cult houses.

In the traditional Melanesian cultural groups, artefacts were produced within specific cultural systems, however innovation and change did occur over time. There was always room for personal interpretation and new ideas were adopted through cross-cultural contact even before the arrival of Europeans.

Art was greatly influenced by the arrival of Europeans to the region. The last two hundred years have seen increased change, colonialism, decolonisation and global capitalism. Traditions were impacted to a degree never seen before, and in many cases art and artistic expression was modified or ceased completely. Objects collected before the subjective influence of traders, missionaries and administrators are of the utmost importance both anthropologically and artistically as they represent the embodied beliefs and inspiration before the traditional way of life was influenced.

Despite this, traditions have survived and many new ones have arisen. New and contemporary art expression continues to represent the vitality and power of indigenous Melanesian cultures.

Headhunting was, in essence, a tool of political coercion, but it was enmeshed with a complex view of the universe and its spiritual dominance over human life and actions.

Headhunting expeditions were never undertaken before the ritual specialists (hiama) had consulted and received approval from the spiritual world. The blessing of ancestors was essential for the success and safety of such raids. It was important too, that participating warriors were purified and obtained ancestral protection. For this reason warriors would observe various restrictions and undergo spiritual preparation.

Moreover, victims of headhunting raids were metaphorically converted into animals before their slaughter - a ‘wild’ fish or an animal prey. For example the people of Isabel Island were called red fish (heheoku), reflecting their skin colour; and Choiseul Island people were called black fish (valiri) in reference to their dark complexion. There were similarities between bonito-fishing and headhunting ceremonies and related shrines conceived in similar fashion.

Dolls
Rattles
Spinning tops
See more
Back to top
You have reached the end of the page. Thank you for reading.