It was a collection of her letters discovered by her descendants in 1938 that renewed interest in the life and work of Elizabeth Gould (1804-1841). Having passed away forty years before John Gould, Elizabeth's story was obscured in the wake of her husband's continued success.

As interest in Elizabeth Gould grew, information about her continued to emerge. Elizabeth Gould is now credited as the principal artist behind John Gould's early publications, without whom his early ventures into the world of ornithological publishing would likely have failed.

Elizabeth Gould was born Elizabeth Coxen on 18 July, 1804 in the seaside town of Ramsgate, Kent. Her parents, Nicholas Coxen and Elizabeth Tomkins, were firmly middle class, with links to the navy and the military. Of the couple’s nine children, only four survived until maturity. Elizabeth was the only daughter to make it to adulthood. Her oldest brother, Henry, became a naval officer before dying prematurely at age 28; her other two brothers, Stephen and Charles, emigrated to Australia.

Although not much is known about Elizabeth Gould’s childhood and upbringing, we can deduce what her education might have looked like from the trends of the time. Many middle-class girls were instructed in languages, music, and art, with an emphasis on drawing and needlework as desirable "ladylike" pursuits. From the eighteenth century onwards many were instructed in botany and natural history to round out their skills - with an emphasis on scientific illustration.

Elizabeth Gould's education was sufficient to land her a position working for a wealthy and influential family. By her early twenties, she was the governess to the daughter of the King’s Proctor, William Rothery, teaching her Latin, French, and music. Although this position was a testament to her accomplishments, it also indicates that perhaps the Coxen family could not support an unmarried daughter, requiring her to make her own living. Indeed, Elizabeth was miserable in the role. In the only surviving letter from before her marriage, she wrote to her mother that she found the work “wretchedly dull” and was often lonely, as she felt that there was no one in the household in whom she could confide her feelings.

The exact circumstances of Elizabeth Coxen's first introduction to John Gould have been lost to history. Romantics think they may have fallen in love at first sight when Elizabeth took her young charge on a visit to Regent’s Park Zoo, or at the Zoological Society where John Gould was employed as Curator and Taxidermist. More likely, they met through Elizabeth’s brother Charles Coxen, who was also a taxidermist and had performed some work for Gould.

Whatever the circumstances of their meeting and early courtship, the two were married on 5 January 1829 at St James Church in Piccadilly, when they were both 24. Their first child, a son also named John, was born almost exactly nine months after their wedding; sadly, he died in infancy. The couple would go on to have seven more children, six of whom would survive until adulthood.

Although John Gould had little formal education, his secure position within the Zoological Society as Curator and Taxidermist would have been a suitable match for Elizabeth. Considering that she loathed her governess work, Elizabeth would likely have seen marriage as an escape from formal labour, a graduation into domesticity and childrearing that were expected of married women. It may have come as quite a surprise to her that, instead of expecting her to devote herself wholly to hearth and home, her new husband would put her to work on the artistic arm of his business ventures almost immediately.

John Gould couldn’t have picked a wife more perfectly suited to his career ambitions. Elizabeth was patient, hard-working, loyal, obedient – and most importantly, brimming with untapped artistic talent. This was a quality that John himself sorely lacked. In the first few years of their marriage, John Gould engaged Elizabeth’s drawing skills in his correspondence with his fellow naturalists. In 1830, after a delivery of bird skins from the Himalayan Mountains was delivered to the Zoological Society, John Gould entrusted his wife with the creation of the plates for his first folio publication: A Century of Birds from the Himalaya Mountains. Elizabeth Gould learned the technique of lithography to execute John Gould’s vision for the work, assisted by Edward Lear, the ornithological artist and nonsense poet.

After the initial success of Century, Elizabeth Gould continued to create illustrations for her husband throughout the 1830s. During this time she contributed to several publications including John Gould's Monograph of the Ramphastidae (1834) and Monograph of the Trogons (1834-36), as well as creating 50 plates for the second volume of Charles Darwin's Voyage of the H.M.S. Beagle, 'Birds' (1838). She and Edward Lear also continued to work together on Gould’s five-volume publication The Birds of Europe from 1832-1837. Under Lear's guidance Elizabeth's artistic style would develop, becoming more fluid and lifelike.

In 1838, Elizabeth Gould accompanied her husband on a two year collecting expedition to Australia in support of his ambition to publish The Birds of Australia. While her eldest son, John Henry, travelled with them, Elizabeth was heartbroken to leave her three younger children in the care of her mother. After a five month voyage, Elizabeth and John Gould and their party arrived in Hobart, where they would stay for the next eleven months. A pregnant Elizabeth Gould spent much of her time illustrating the native plants while staying at Government House:

I find amusement and employment in drawing some of the plants of the colony, which will help to render the work on Birds of Australia more interesting... I trust we shall be enabled to make our contemplated work of sufficient interest to ensure it a good sale. Elizabeth Gould, letter to her mother, 9 January 1839. In The Story of Elizabeth Gould by Alex Chisholm, 1944

From Hobart, the Goulds travelled to Sydney by boat. They continued onto the Hunter Valley, where Elizabeth stayed at her brother Stephen Coxen's homestead in Yarrundi for a further four months while John mounted several more collecting expeditions. Elizabeth Gould continued to draw diligently while at Yarrundi. Naturalist Charles Pickering also stayed at the Coxen homestead in December 1839 and wrote in his journal of watching Elizabeth Gould at work:

Mr. Coxen received us politely and introduced us to his sister Mrs. G., to whose talent and industry the world is indebted for the celebrated Ornithological Illustrations. I had the pleasure of seeing the lady at her pencil, and was surprised by the rapidity of her execution. Charles Pickering's journal, 10 December 1839. In John Gould The Bird Man: Correspondence, with a Chronology of his Life and Works by Gordon C Sauer, 1998-2006

The Goulds returned to England on August 18, 1840. Sadly, Elizabeth's reunion with her mother and children was short-lived. A year after her return from Australia, Elizabeth Gould gave birth to her eighth child, a daughter named Sarah, and contracted puerperal fever. She died on 15 August, 1841 at the age of thirty-seven. John Gould was reportedly devastated by the loss of his wife and creative partner; although he would find new artists to assist him with his publications, he would never remarry.

The Birds of Australia: In Seven Volumes was completed in 1848, eight years after her death. John Gould had intended for the entirety of the nearly 680 plates in the book to be completed by Elizabeth; ultimately, 84 were produced by her hand, the rest being completed by Henry Constantine Richter from sketches and notes created by Elizabeth during her time in Australia.

Although much of John Gould's mourning for his wife was private, John Gould praised Elizabeth's work in the introduction to The Birds of Australia, and dedicated the beautiful rainbow finch to his wife, naming it Amadina gouldiae (now Chloebia gouldiae), or Gouldian Finch, in her honour.

It is therefore with feelings of no ordinary nature that I have ventured to dedicate this new and lovely bird to the memory of her, who in addition to being a most affectionate wife, for a number of years laboured so hard and so zealously assisted me with her pencil in my various works, but who, after having made a circuit of the globe with me, and braved many dangers with a courage only equalled by her virtues, and while cheerfully engaged in illustrating the present work, was by the Divine will of her Maker suddenly called from this to a better and brighter world; and I feel assured that in dedicating this bird to the memory of Mrs. Gould, I shall have the full sanction of all who were personally acquainted with her, as well as of those who only knew her by her delicate works as an artist. John Gould, in The Birds of Australia by John Gould, volume 3, 1848 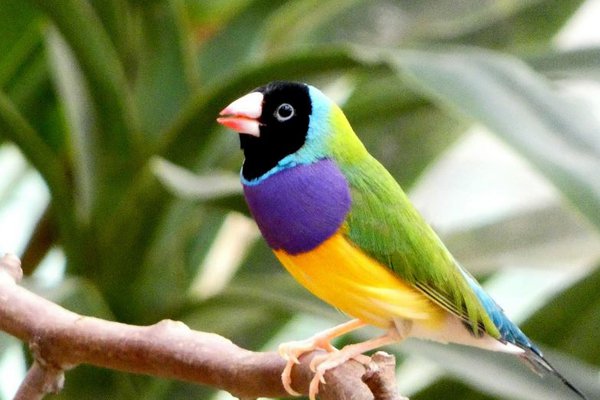 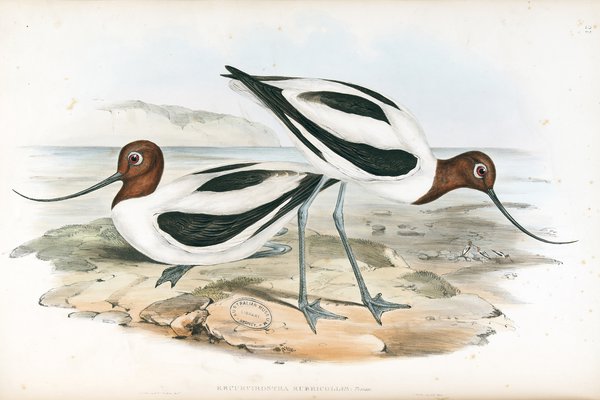 The Birds of Australia: in seven volumes 06 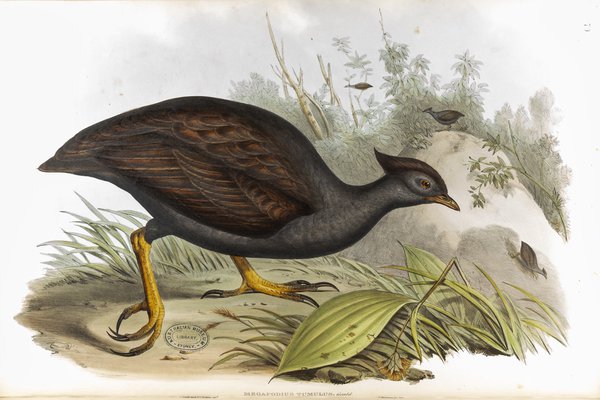 The Birds of Australia: in seven volumes 05 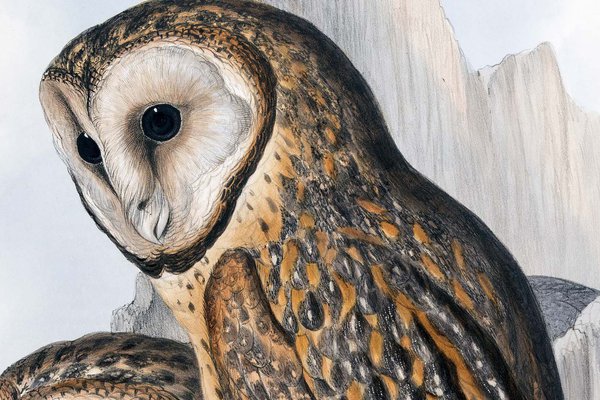 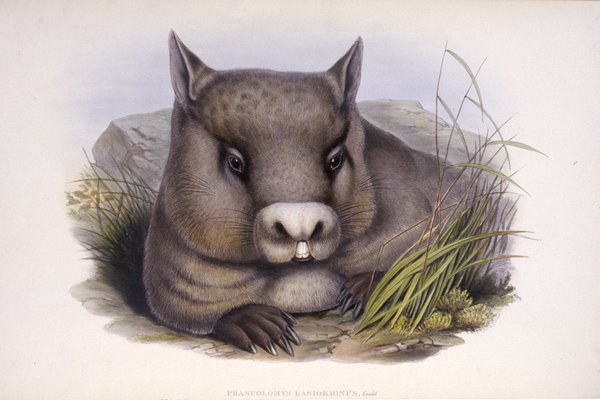 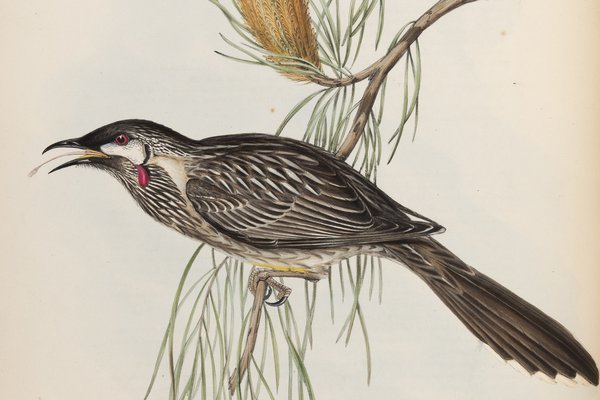