Although John Gould had a lot of ambition and possessed an excellent mind for entrepreneurship, there was one area in which he had little skill. He could describe a bird in incredibly accurate detail, but he lacked the artistic flair needed to portray it on a page. Luckily for him, his new wife Elizabeth had more than enough talent for them both. Early in the marriage, John Gould recognised her potential as a scientific illustrator. Soon her skills were being used to advance his budding ornithological career. Although we don’t know exactly when Elizabeth Gould began drawing for her husband, by 1830 she was regularly creating work for him. An 1830 letter from John Gould to William Jardine confirms that not only was Elizabeth Gould was creating bird artworks for his colleagues, but that her contribution was acknowledged by both men:

Sir, I take the opportunity of forwarding 3 Drawings, which are the only ones I have been able to get done for you owing to Mrs Gould being very much indisposed. John Gould in a letter to William Jardine, 1 September 1830

The phrasing of John Gould’s letter belies the amount of effort that Elizabeth Gould was contributing to the household in the domestic sphere as well as the professional. The condition which caused Elizabeth to be “very much indisposed” may have been related to the fact she was almost six months pregnant at the time the letter was sent.

Birds of the Himalayas: an opportunity 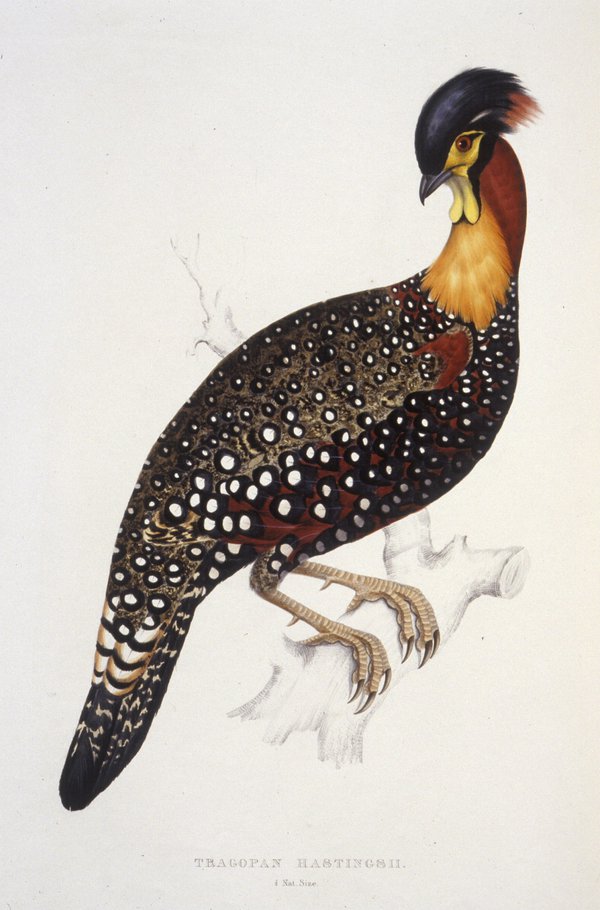 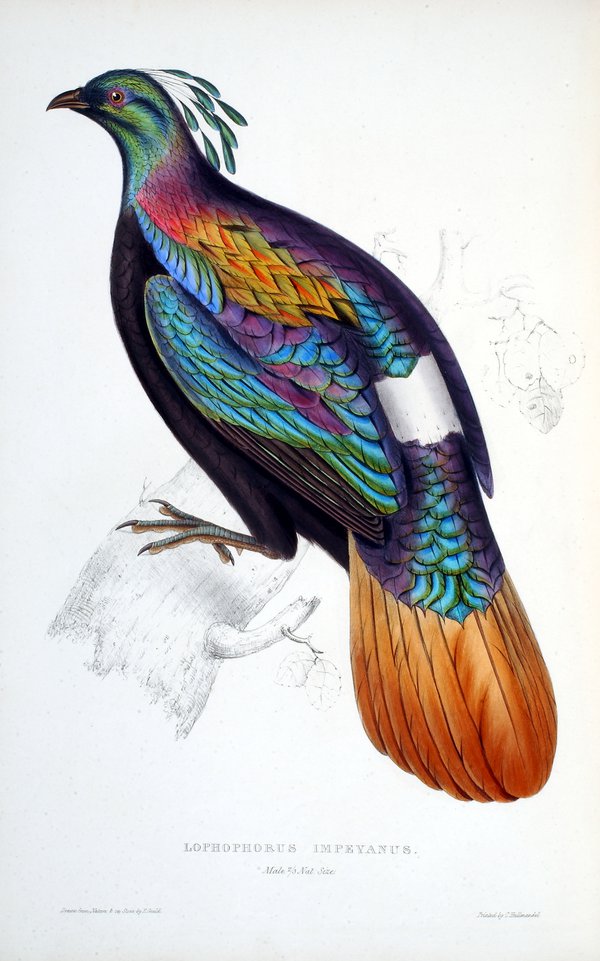 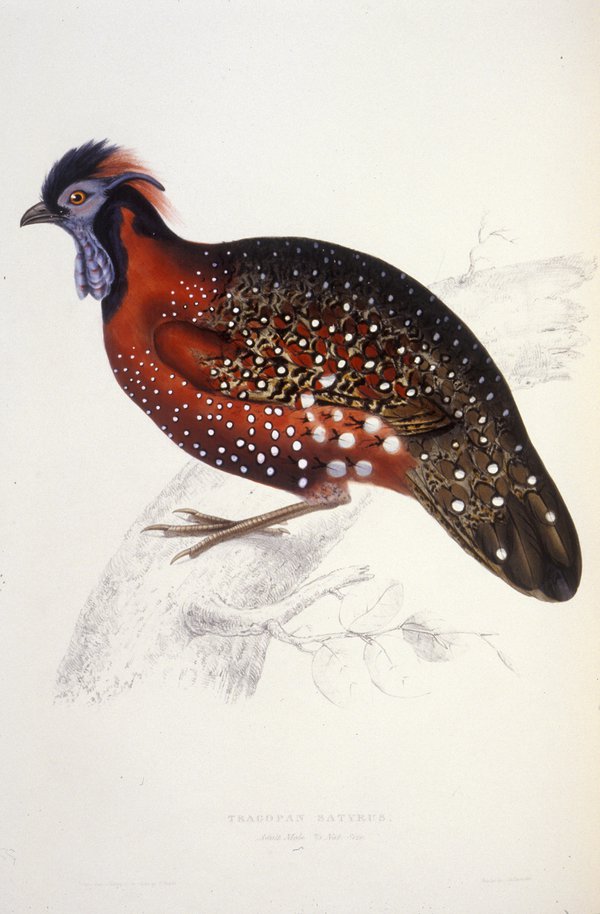 Near the end of 1830, the Zoological Society was sent a package of bird specimens from the Himalayan Mountains. Many of these specimens had never been described in a scientific publication. John Gould saw this as the opportunity to make his mark on the ornithological world. Having enlisted his friend Nicholas Ayward Vigors to write the text, John Gould would publish a full colour folio work featuring one hundred specimens from this distant part of the world, using the technique of lithography to print the illustrations. This relatively new method of printmaking made it much easier for artists to replicate their work in print and was far quicker and more accurate than etching or engraving. And he had full faith in his wife’s ability to learn this technique: according to John Gould’s biographer R. Bowdler Sharpe, when Elizabeth asked, “But who will do the plates on stone?” John replied, “Why, you of course!”

Lithography in the time of Gould

John Gould was asking a lot of his pregnant wife. For one thing, there was a huge difference between creating a handful of drawings for his friends and colleagues and illustrating an entire ornithological publication. For another, while lithography was becoming more common in Europe, it was relatively unheard of in Britain in 1830. To learn the process, Elizabeth Gould enlisted the help of the Goulds’ friend and collaborator, Edward Lear, who was the pioneering figure in British lithographic art at the time (Lear is believed to have also assisted her with some of the foreground work on Century, although he is uncredited). With Edward Lear’s help, she rose to the challenge. The first plates were delivered to her husband’s subscribers in December 1830. Their second son, John Henry, was born just days after Part One of A century of birds hitherto unfigured fromthe Himalaya Mountains was issued. Elizabeth Gould had only a few weeks to recover. A month after the birth, she set to work on the second part.

Although lithography was less taxing than other printing methods and was considered a “suitable” occupation for a lady, it still required Elizabeth Gould to spend many hours a day at her drawing desk poring over a limestone tablet. John Gould had a demanding schedule – his wife was expected to complete four plates a month. Between the end of 1830 and April 1832, when Part 20 of Century was published, she completed on average one plate a week.

Although Elizabeth Gould’s talent is evident in the plates for Century, it is clear she lacked the confidence and experience that would enable her to create the more lifelike representations of birds she would later become renowned for. The birds, which were drawn from taxidermied specimens, are more artificially posed and lack the expression and movement of her later work. Elizabeth Gould would develop her style as she worked with Edward Lear on The Birds of Europe from 1832-1837. Under his tutelage her work would flourish, gaining more detail as she adopted his technique of drawing ornithological subjects from life.

The Gould name is established

A Century of Birds garnered 298 subscribers by the end of its run and was considered a marvellous success. Elizabeth Gould didn’t sign her work, and her name is not on the title page, but she was still acknowledged as John Gould’s partner in the venture: each plate in Century was marked with the phrase “Drawn from nature on stone by E. Gould”.

While John Gould received most of the credit for the work, Elizabeth’s efforts were acknowledged and praised in their scientific circle. Prideaux John Selby, himself an acclaimed ornithological illustrator, said of Elizabeth Gould’s Century plates, “I like them as well as [John James] Audubon’s”. Vigors, Gould’s co-author of the publication, was so impressed by Elizabeth’s work that he named the subject of plate 56, Cinnyris Gouldiae, in her honour.

Unfortunately, there is little evidence left to tell us what Elizabeth Gould herself thought of being inducted into her husband’s first major publishing venture – only John Gould’s correspondence from this time survives. Whether Elizabeth Gould was pleased with her initial involvement or not, from A Century onward, her reputation as an artist and partner in her husband’s work was known.

John Gould was an immensely successful publisher. Over the course of his lifetime he produced 21 titles, 15 of which were folio sets consisting of 49 volumes containing 2999 unique plates.