Water Spiders are widely distributed across Australia, and sometimes turn up at suburban garden ponds. Not all species are strongly associated with water, and some make a sheet web to catch food. Many species make a special web for their emerging spiderlings, leading to another common name of Nursery-web spiders.

Water Spiders have eight eyes in two or three rows with one pair of eyes sometimes on a tubercle. Their long thin legs are usually spread wide and the aquatic species are often found on the water’s surface or on the pond margin with the front legs resting on the water. The colours and patterns are variable but often involve longitudinal stripes, which can be strikingly contrasting.

Females may be carrying an egg sac in their chelicerae or guarding a nest among foliage. Some species are free living hunters, others build sheet webs. The often gigantic spiders in the genus Megadolomedes can be recognised by having pseudosegmented tarsi, which are long and curved compared to the shorter, straight tarsi of the otherwise visually similar genus Dolomedes.

The other Australian genus with pseudosegmented tarsi is Hygropoda, which is represented only by the green species H. lineata in Australia and has a distribution north of Townsville.

Many species of Water Spiders live near ponds, lakes and slow-running streams, and the genus Mangromedes, as its name suggests, inhabits mangroves. In the subtropics and tropics there are several species that are less associated with water, such as Dendrolycosa icadia, the Tree Water Spider. These are mostly web-building species that live in rainforest, heaths and open forest.

Water Spiders are found Australia-wide, including near water courses and billabongs in the arid zone. With the exception of Dolomedes, which occurs almost worldwide, the genera placed in subfamily Thalassiinae are endemic to Australia: Megadolomedes (Giant Water spiders), Tasmomedes, Ornodolomedes (Rainforest Sprites) and Mangromedes.

What does it eat?

Water Spiders commonly eat arthropods, small fish, frogs and tadpoles. Overseas they have also been reported feeding on reptiles (snakes and lizards) and earthworms. Aquatic species hunt around water bodies and both on and below the surface of water.

The common name Fishing Spider comes from a common hunting technique of waiting on the bank or floating vegetation with front legs resting on the water surface to detect ripples from potential prey.

The common name ‘Nursery-web spider’ comes from the web nest constructed in foliage by female spiders when the spiderlings are due to emerge from the egg sac. The web may assist the spiderlings to catch prey before they disperse, while the nest is protected by the female. This nursery-web building behaviour may not be common to all the Australian species, as detailed biology is unrecorded for several genera.

Frogs, water birds, lizards and large fish are some of the animals that are likely to prey on Water Spiders.

The aquatic species are adept at travelling across the water surface, the front and rear legs are extended while ‘sculling’ with the second and third legs. Hairs and the spider’s weight-spreading stance keep them afloat. However they are also adept at diving and swimming underwater, and when threatened can remain submerged for at least 30 minutes. A layer of air trapped by hairs around the body allows them to breath during this time. 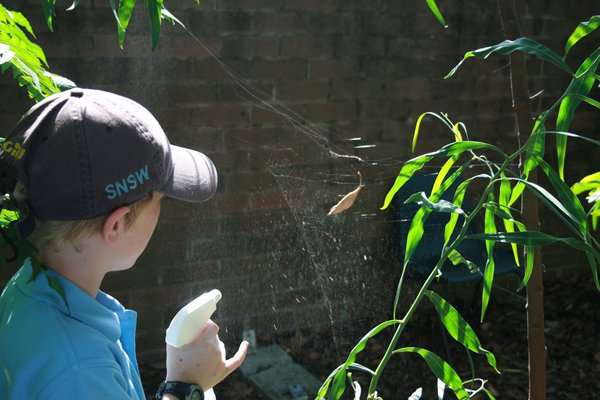