The Emperor Nautilus is the most widely distributed and best known Nautilus species, of which there are only eleven living.

Nautilus pompilius has a small, closed umbilicus which is usually partially covered by the callus. Shell colour patterns vary, but usually consist of irregular brown to reddish brown stripes that radiate from the umbilicus to outer shell (venter).

N. pompilius inhabit deeper continental shelf and slope waters associated with coral reefs from near the surface to depths of up to 750m.

They are found throughout the Indo-West Pacific, the Philippines, Papua New Guinea to Fiji and northeastern and northwestern Australia.

Like other species, N. pompilius are scavengers and opportunistic predators - feeding mainly on crustaceans. Sensory cells on the inner surface of their numerous sucker-less tentacles are used to find the bodies of dead animals.

They adjust their buoyancy by altering the amounts of fluid and gas in the chambers of their shells, which allow them to migrate vertically each day. During the day they rest deep on reef faces at around 300-400m and rise up in the night into shallower waters to forage.

Nautilus species have a life span of up to 20 years.

This species is frequently kept in public aquariums and has been successfully bred in captivity. Like other nautilus species, the males have four tentacles that are used to transfer spermatophores to females during copulation, who then uses it fertilise her eggs. Mating can last up to 24 hours.

N. pompilius supports a substantial shell trade, mostly from beach drift specimens, subsistence and artisanal fisheries. The outer layers of the shell are sometimes removed to reveal a silvery mother-of-pearl outer surface. The meat for human consumption is limited to local markets mainly in the Philippines.

Multi-Gene Analyses of the Phylogenetic Relationships among the Mollusca, Annelida, and Arthropoda 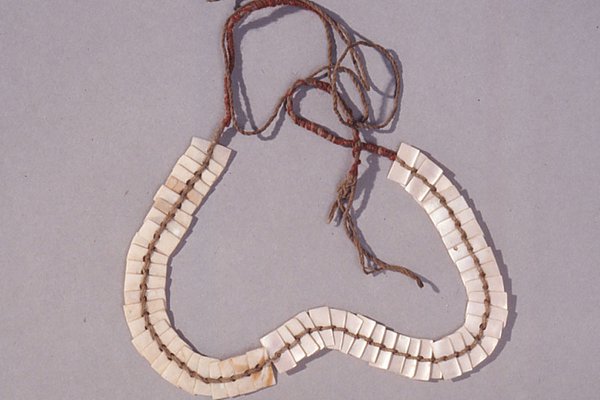 This shell forehead band was made from 59 rectangular pieces of nautilus shell, each with a centrally drilled hole.