White's Seahorse is a relatively common species in the Sydney area. It is commonly seen holding onto the nets of swimming enclosures. The species was named after named after John White, Surgeon General to the First Fleet.

White's Seahorse is endemic to Australia. It occurs in depths down to about 25 m in temperate marine waters along the south-eastern and south-western coasts of Australia. It is common in Sydney Harbour.

Seahorse feeding involves a rapid upward movement of the head, a lowering of the floor of the mouth, (which increases its volume), and opening of the mouth. All three occur almost simultaneously, resulting in prey being sucked in through the mouth and up the long tube-like snout.

Seahorses are beautiful fishes with some remarkable adaptations including hard bony armour on the body, a prehensile tail (which can be used for holding on), binocular vision, excellent camouflage and a most unusual mode of reproduction.

Colouration
The colouration of seahorses, combined with secretive behaviour, often makes them very difficult to spot in their natural habitat.Some species of seahorses even have encrusting organisms growing on them to further enhance their camouflage. Seahorses in general are known for their ability to change colour depending upon their habitat, what they have eaten, and also as part of courtship and 'greeting rituals'.

During the greeting ritual, White's Seahorses change from their usual sombre colouration into far brighter shades of cream and yellow.

Hard bony armour
All seahorses have bodies that are protected by strong external plates which are arranged into a series of 'rings'. These rings help to protect the body of the fish, but result in the fish having only limited flexibility. The number of trunk (body) and tail rings doesn't vary much among individuals of a species, but does differ between species, so it is a handy character for telling species apart. White's Seahorse has 11 trunk and 33-36 tail rings.

Seahorses lack a caudal (tail) fin, and since this fin provides most fishes with their main swimming power, seahorses don't swim very fast. They are however very manoeuvrable, and can hover very precisely. They can swim forward or backwards by undulating their dorsal and pectoral fins.

The coronet is the bump on the top of the head. Differences in coronet shape are useful in separating species.

Prehensile tail
Seahorses all have a prehensile tail. This allows the fish to hold on to objects such as seagrass.

Eyes
Like all fishes, the eyes of seahorses can move independently. Because of their placement, it is believed that seahorses have binocular vision. This would help in catching the small crustaceans which make up much of the diet.

The reproduction of seahorses is truly remarkable. The male seahorse has a pouch (a marsupium) into which the female seahorse lays her eggs.

In White's Seahorse, the male fertilises the eggs and cares for them for about three weeks (depending upon several factors including the temperature). During this time, he aerates the pouch, and most remarkably of all, nourishes the eggs through a capillary network in the pouch with his own 'placental fluids'. At the end of the 'pregnancy', the male gives birth to 100-250 fully formed young seahorses of about 1 cm in length which swim away to care for themselves. The male then 'becomes pregnant' again almost straight away. White's Seahorse is monogamous (females and males form permanent pairs) and breed from October to April. 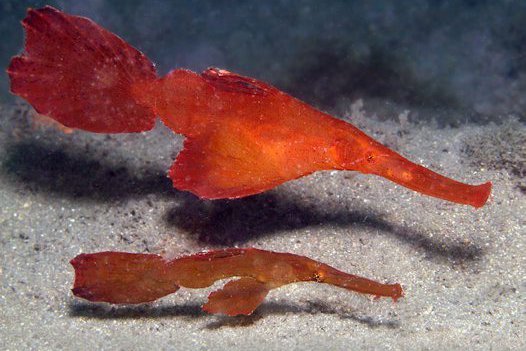 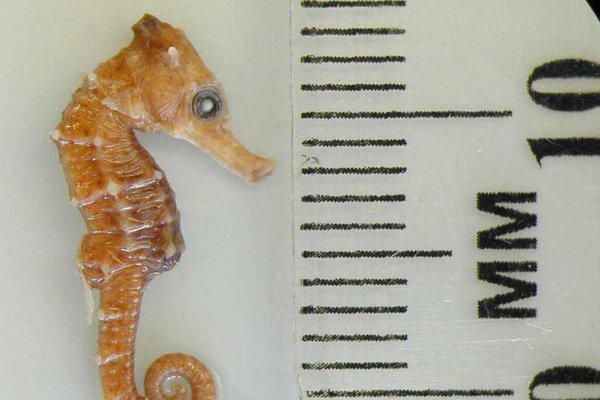 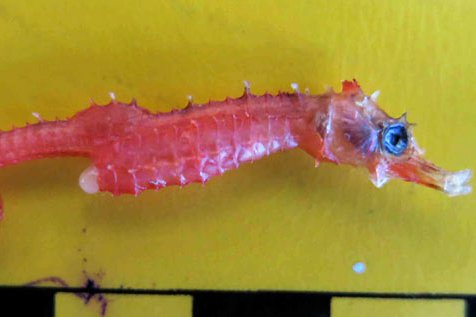 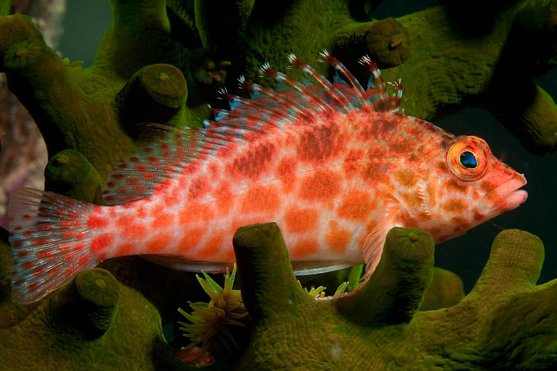 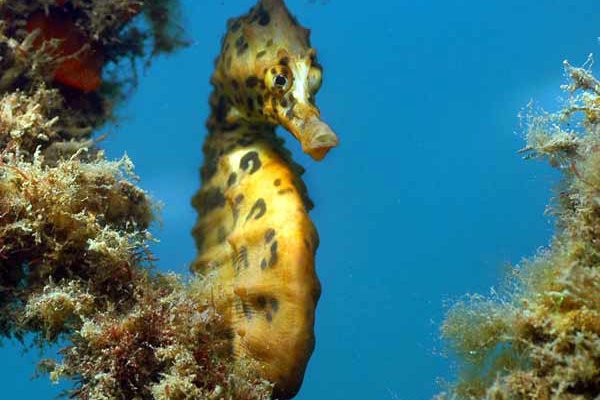