The Spiny Pipehorse is the longest of the Australian syngnathids. It is sometimes seen washed up on beaches after storms.

The Spiny Pipehorse can be recognised by its long, thin body that is encased in hard, spiny, ring-like plates. It has a very long, slender snout and a prehensile tail. This pipehorse is yellow, pink or orange in colour with narrow yellow bars. It also has a variable pattern of dark bars or blotches and a red-brown area around the anus.

The species lives in temperate marine waters. Commonly it is trawled from water of 30 m - 230 m depth, over muddy bottoms. However, in the Derwent Estuary, Tasmania, it is sometimes found in water as shallow as 2 m - 3 m.

The Spiny Pipehorse is known to occur from Southern Queensland, New South Wales, Victoria, Tasmania and New Zealand. It is sometimes seen washed up on beaches after storms.

Just like the Weedy Seadragon, males of this species are sometimes seen carrying eggs attached to the under surface of the tail. 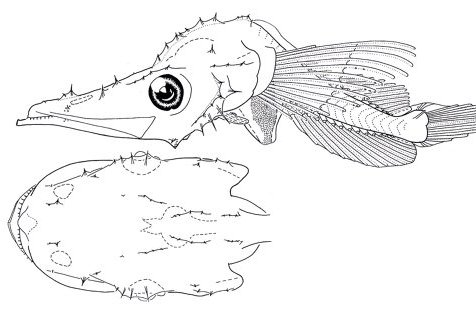