All Balinese Hindus belong to several temple congregations, based on different forms of social organisation, locality and genealogy. They worship their ancestors as well as the founders of villages and other organisations. 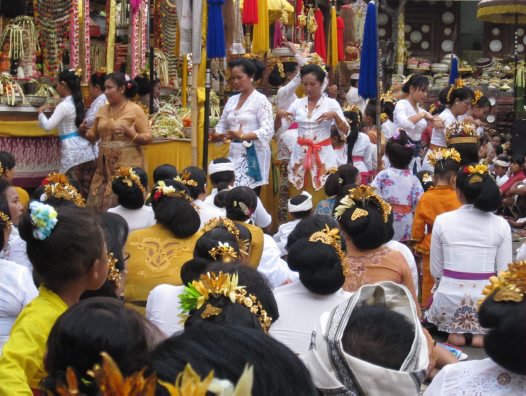 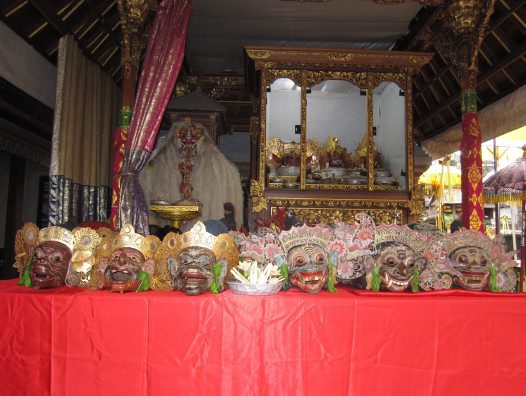 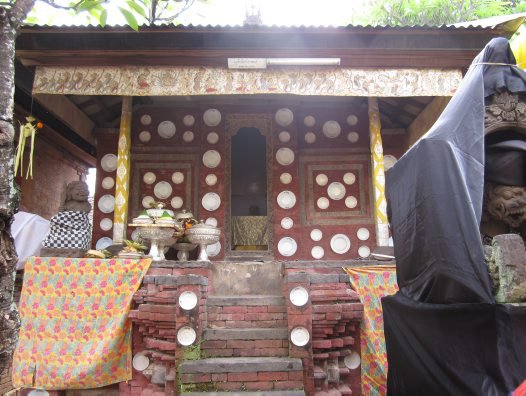 More than one hundred temples are located in the ritual territory encompassing the villages of Kamasan, Gelgel and Tojan. Some temples are extensive complexes, such as the state temple Pura Dasar and Pura Watu Klotok on the coast. These temples are associated with the Gelgel Royal Court and are visited by Balinese from all over the island. Other, less prominent temples, are located along the main roads. Most temples are situated near domestic compounds and along narrow laneways.

One of the most important temples for Kamasan artists and their families is Pura Bale Batur. Membership of this temple (pura pamaksan) is ‘compulsory’ for residents of Banjar Sangging and Banjar Pande Mas. The dozens of paintings made by local artists are kept at this temple because temples and related ceremonies are among the main reasons for which traditional Kamasan paintings were and still are produced. To illuminate their functional context, Anthony Forge documented the ceremonies and paintings in Pura Bale Batur in 1973 and 1979.

Siobhan Campbell documented the current ceremonies and paintings of the Pura Bale Batur again in 2010 and 2011. This interesting comparative material is highlighted by images selected from the large pool of Anthony Forge and Siobhan Campbell’s documentation respectively.

Catalogue of the Australian hydroid zoophytes / by W.M. Bale.

Saving princess and other adventures

Art, Agriculture and Fertility in Bali.

Redescription of adult and larva of Colasposoma sellatum Baly (Coleoptera: Chrysomelidae: Eumolpinae): a pest of Sweet Potato in Australia