Helicoprion, like other chondrichthyan fish, had skeletons made of cartilage. Unfortunately, this makes it difficult to determine what Helicoprion looked like because the skeleton didn’t fossilise easily. Almost all Helicoprion specimens are fossilised 'tooth whorls' that consist of teeth embedded in a spiraled root.

Where did the Helicoprion live?

Fossils of Helicoprion have been found across America, Australia, Asia and Europe, indicating that it had a global distribution during the Permian.

Understanding the unique teeth and lower jaw of Helicoprion was important for scientists as it was the key to understanding the ecology and evolution of this peculiar shark. Scientists first argued that hard-shelled prey items, such as ammonoids, would slip out of the mouth due to the shape of the tooth whorl. However, reconstructions indicate that soft prey items, such as squids, would be trapped in the tooth whorl, making them difficult to ingest (Ramsay et al. 2015).

It wasn’t until the application of biomechanical principles that scientists were able to reveal how this predator consumed its prey. Amazingly, each tooth had a different function depending on its position in the tooth-whorl: anterior teeth hooked and dragged prey into its mouth, the middle teeth pierced and cut the prey, whilst the posterior teeth cut and pushed the prey into its oral cavity (Ramsay et al. 2015). This unique feeding apparatus would have allowed Helicoprion to consume both hard- and soft bodied prey items using different feeding strategies (Ramsay et al. 2015). 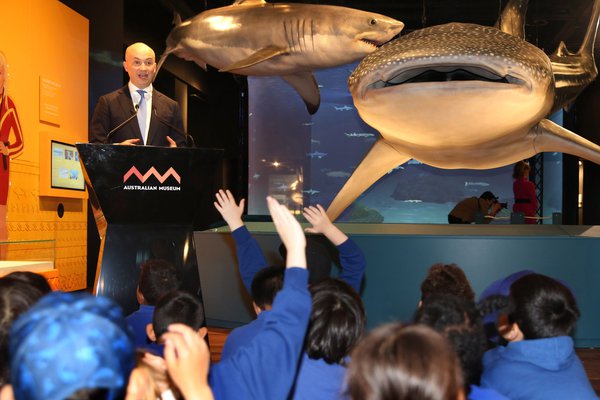 Sharks are ancient creatures that evolved long before dinosaurs lived on land. They have survived five global mass extinctions, each of which wiped out more than 75 per cent of animal species.

Special exhibition
Now on until 31 January 2023
Find out more
Back to top
You have reached the end of the page. Thank you for reading.