The Figbird nests in small, semi-colonial groups, with nests often quite close together.

Figbirds are part of a worldwide family that includes the orioles, of which Australia has two other members (the Yellow and Olive-backed Orioles). Males have bare, red skin around the eye, contrasting against a black crown and grey neck and throat. The remainder of the body is olive-green, except for a white under-tail area. Females have grey skin around the eye and lack distinctive head markings. They are brown-green above and dull-white below, streaked with brown. Both sexes have a blackish bill. There are two distinct colour forms of the males of this species. Males north of Proserpine in Queensland have a yellow front.

The Figbird lives in rainforests and wet sclerophyll forests, but is often found in urban parks and gardens, particularly those with figs and other fruit-producing trees.

The Figbird occurs across coastal regions of northern and eastern Australia from the Kimberley region in Western Australia around to the New South Wales/Victoria border.

Figbirds feed in flocks, often of around 20 birds that are prepared to fly to isolated trees that are suitable for foraging. Figs are a particularly popular food item, although they will feed on most soft fruits and berries in canopy trees. Insects are also important components of their diet.

The gregarious behaviour of Figbirds is maintained in the breeding season, with small groups of birds nesting semi-colonially in adjoining canopy trees. The nest is cup-shaped and built of vine tendrils and twigs. It is supported by its rim from the horizontal fork of an outer branch of the canopy, up to 20 m above the ground. Both males and females incubate the eggs and feed the young.

Figbirds are commonly encountered in city parks that contain fig trees, and will often visit orchards and gardens that have leafy trees and berry-producing plants. 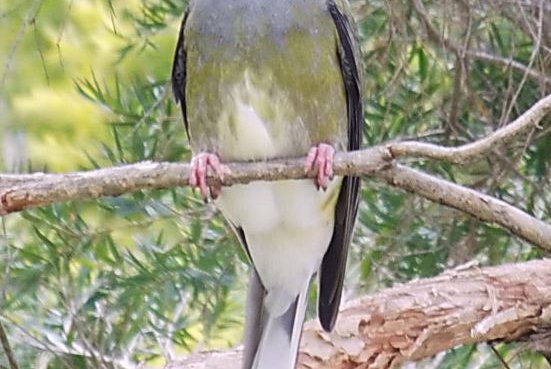 Olive-green body with a black crown and bare red skin around eyes.

Sphecotheres vieilloti
Learn more
Back to top
You have reached the end of the page. Thank you for reading.