2 May 2018, Sydney: The Australian Museum and Stockland have again joined forces to tour a life-sized model of a prehistoric creature around NSW – this time the mighty prehistoric crocodile, Sarcosuchus imperator, aka SuperCroc.

Appearing first at Stockland Merrylands on Tuesday 8 May 2018, SuperCroc, one of the largest crocodiles to roam the earth, will then travel to Stockland shopping centres at Shellharbour, Wetherill Park and Green Hills.

“Visitors to Stockland shopping centres are certainly in for a treat when they encounter SuperCroc, the 11m long ancient African monster which is still clearly bigger than any croc known to have snapped its jaws in Australia,” Kim McKay, Director and CEO, Australian Museum said.

“It is great to be working with Stockland giving communities outside of central Sydney the opportunity to see this prehistoric beast and learn about its habitat and life dating from 110 million years ago,” she said.

Brooke Lee, National Retail and Trade Marketing Manager at Stockland, said: “We’re thrilled to work with the Australian Museum to bring such a fantastic educational entertainment experience to our shopping centre customers.

“With its intriguing history and impressive size we know SuperCroc will be a favourite for young and old alike and we are excited to give shoppers a chance to get up close and personal with this gigantic prehistoric predator.”

Participating Stockland shopping centres will also run a number of fun and educational activities for kids to learn more about SuperCroc during its tour. Visitors at each centre will also have the chance win a family trip for four to the Northern Territory for a real-life crocodile experience.

Roaming the rivers of Africa during the early to late Cretaceous period (110 million years ago), SuperCroc, the flesh-on-bone “bus-sized” replica of Sarchosuchus imperator is possibly one of the largest known crocodilians ever to exist. This fascinating predator ruled over fresh water environments and is a distant ancestor of today’s modern crocodiles, alligators, gharials and caimans.

Ranging between 11-12 metres in length and weighing approximately 8 tonnes – about as heavy as a fully grown male elephant, Supercroc’s jaws boasted more than 100 teeth, including a row of enlarged bone-crushing incisors.

The two-metre giant skull was unearthed in the parched sands of the Sahara by palaeontologist and National Geographic Explorer-in Residence, Dr. Paul Sereno, during an expedition in 2000.

Sarcosuchus had a substantial overbite and the enlarged, bulbous end of its snout sheltered a huge cavity that may have given the giant croc an enhanced sense of smell and an unusual call. Its eye sockets were tilted upward, which helped it to conceal its huge body underwater while scanning the river’s edge.

According to Dr. Sereno, the snout and teeth were designed for grabbing prey that strayed too close, resulting in the enormous reptile making Africa’s ancient riverbanks a dangerous place, even for a dinosaur.

Built in collaboration with a team of palaeontologists and scientists, National Geographic gifted SuperCroc to the Australian Museum when a documentary about the predator was completed.

Alive during the early to late Cretaceous period, this fascinating predator ruled over fresh water environments approximately 65.5 million years ago and is a distant ancestor of today’s modern crocodiles, alligators, gharials and caimans.

With its elongated snout, over 130 bone crushing teeth and a powerful tail designed to cut through water at great speed, the Sarcosuchus imperator would ambush and prey on anything that entered the water, from fish to dinosaurs.

Name: Sarcosuchus imperator (meaning “flesh crocodile emperor”)
Alias: SuperCroc
Lived: Early – Late Cretaceous period (approximately 112 – 65.5 million years ago)
Regions: Fossils have been found in West Africa (including central Niger) and Brazil, South America
Habitat: Freshwater environments
Likes to eat: Pretty much anything it can ambush; from fish to dinosaurs!
First discovered: 1946 in the Sahara Desert
Size: One of the all-time largest crocodilians at 11 – 12 metres in length when fully grown. By comparison, a modern saltwater crocodile is only about half the size at 6.8metres.
Weight: 8 tonnes (comparative to an adult male elephant)
Distinguishing features:

About Stockland: Stockland (ASX: SGP) was founded in 1952 and has grown to become Australia’s largest diversified property group – owning, developing and managing a large portfolio of shopping centres, residential communities, logistic centres, business parks, office assets and retirement living villages. Stockland is rated as one of the most sustainable real estate companies in the world by the Dow Jones Sustainability World Index (DJSI). Stockland is also an Employer of Choice for Gender Equality, as recognised by the Workplace Gender Equality Agency
www.stockland.com.au

About Australian Museum: The AM, founded in 1827 is the nation’s first museum, and is an internationally recognised natural science and culture institution focused on Australia and the Pacific. As custodian of more than 18 million objects, the AM is uniquely positioned to provide a greater understanding of the region through its scientific research, exhibitions and public and education programs. Through the Australian Museum Research Institute (AMRI), the AM also has a leading role in conserving Australia’s biodiversity through understanding the environmental impacts of climate change, potential biosecurity threats and invasive species. 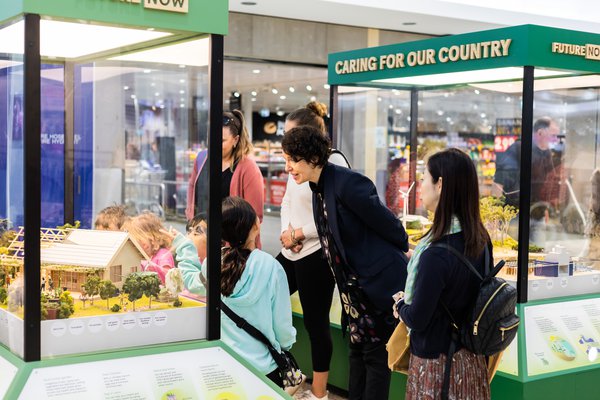 Stockland and the Australian Museum have worked together to bring educational and engaging content to retail visitors across New South Wales and Queensland.