24 August 2017 Sydney Australia: The ice age world of woolly mammoths will be brought to life in Mammoths - Giants of the Ice Age, exclusive to the Australian Museum from 17 November 2017.

Presented in partnership with Destination NSW, the Australian Museum (AM’s) major exhibition will feature Lyuba, (pronounced Lay-oo-baa) – a 40,000-year-old baby woolly mammoth, discovered in 2007 by a Siberian herder and his two sons. This will be the first time the near fully intact baby mammoth has been on display in the southern hemisphere.

“There’s a visceral awe that takes hold of you when looking at a specimen like Lyuba,” Australian Museum Director & CEO, Kim McKay said.

“The exhibition brings natural history to life and gets us closer to knowing what these animals were like. While Australia did have our own unique prehistoric megafauna, mammoths never lived on our continent – so this may be the only chance for curious locals to learn more about these amazing giants.”

For millions of years’ mammoths survived on the wind-swept icy lands of the northern hemisphere. Great beasts weighing up to eight tonnes, standing as tall as 4 metres and bearing tusks up to five metres long, mammoths were wonderfully successful creatures of the Ice Age. But despite their size and ability to adapt to different habitats, these early cousins of the elephant eventually went extinct, leaving us an abundant fossil record, particularly in the vast, deep-freeze of Siberian permafrost.

Developed by the internationally renowned Field Museum in Chicago, the exhibition includes a rich collection of fossils, casts and cave drawings showing evidence of how early humans hunted and honoured these massive creatures.

Mammoths lived alongside with humans for thousands of years and were a source of food for early people, along with serving as artistic inspiration. Artwork dating from between 35,000 and 10,000 years ago will also be on display in the form of miniature carvings made of bone, stone and mammoth ivory from mammoth tusks.

Once considered mythical giants, mammoths are an extinct group of elephants of the genus Mammuthus, whose ancestors migrated out of Africa about 3.5million years ago.

Highly adapted to the cold, with a dense undercoat of hairs up to one metre long, small, fur-lined ears and immense curving tusks used primarily for fighting and foraging beneath the snow, the woolly mammoths spread across Europe and the Bering Land Bridge into a new world of grasslands and predators, humans not least among them.

Mammoths - Giants of the Ice Age explores not only how these Ice Age creatures lived, forming herds similar in social structure to those of modern elephants, but also how they became extinct including the impact of climate change, human predation and other factors.

The exhibition also considers issues around the cloning of now extinct megafauna such as the mammoth, and ongoing conservation efforts to preserve modern-day elephants.

Molecular geneticist and Director of the Australian Museum Research Institute Dr. Rebecca Johnson said there are a number of ethical considerations regarding the cloning of mammoths, including deciding which species should be re-established, the influence of the environment and the social structures of the animals. “However, the technology being utilised could be used to save what mammals we do have, rather than trying to bring back the one’s we’ve lost.”

Mammoths - Giants of the Ice Age transports families and visitors to a time when giants walked among us and humans struggled to survive in a world they had yet to conquer.

Travel packages to see this larger than life exhibition in Sydney are available through Qantas Holidays, and include entry to the exhibition and overnight accommodation.

Lyuba is owned by The Yamal-Nenets Regional Museum Exhibition Complex named after I. S. Shemanovsky.

In 2017, the Australian Museum (AM) celebrates 190 years, marking its significant role as the nation’s first museum. In the lead up to its bicentenary, the AM is embarking on major transformation plans to secure its place as the leading natural science and culture museum in the region. Learn more about the AM’s Master Plan.

As part of the 190th celebrations, the AM invites everyone to spend their birthday with us for free. Claim a free entry on your birthday by registering online.

Mammoths exhibition is made possible through the generous support of the NSW Government and Destination NSW.

During the Pleistocene (2.5 million to 11,700 years ago) the word had many examples of large animals that are collectively known as Megafauna. Australia was close to its current position, but sea levels were much lower. Humans may have first arrived in Australia during this time. 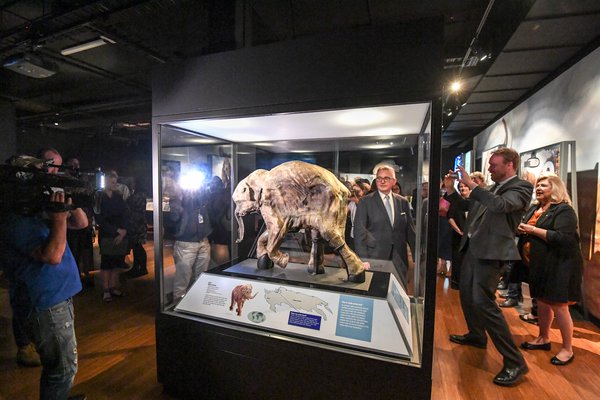 The story of baby Lyuba

How did Lyuba, a 42,000 year-old baby mammoth journey from the Siberian Ice Age to her current location on display at the Australian Museum?

Boomerang forms
Discover more
Back to top
You have reached the end of the page. Thank you for reading.