We get a lot of questions about beetles. This is probably due to the fact that beetles are the largest group of animals on Earth. There are more than 30,000 known species in Australia and many more yet to be discovered. Conservative estimates of beetles worldwide is 350 000 species. Beetles can vary in size from tiny, just a fraction of a millimetre to huge, 160 millimetres long. Their sheer numbers, diversity and beauty make them an often sighted animal.

Beetles belong to the order Coleptera, which means 'sheath wings'.

Like almost all insects, beetles have 3 body parts- a head, thorax and abdomen. they have 3 pairs of legs and 2 pairs of wings. Beetles' forewings are hardened into sheath like protective coverings called elytra that protect their delicate hindwings.

All beetles have a life cycle that includes a grub, pupa, and adult stage.

Check how many of these beetles you have come across.

Commonly known as the Botany bay or Diamond weevil, Chrysolopus spectabilis, was collected by Joseph Banks on his voyage with captain cook and was the first insect to be scientifically described and named from Australia. It is commonly found on wattles in coastal woodlands and forests where the adults feed on the foliage.

Christmas beetle, Anoplognathus sp., are often seen as their name suggests, at the close of the year from November to January. The adults feed on both young and mature gum tree foliage, while the larvae are underground feeding on organic matter and the plant roots of grasses. The mated females burrow 5-10 centimetres into soil to lay about 40 eggs in small cavities. These beetles come in a range of colours according to species and usually have a metallic o green or golden sheen on their bodies.

Fiddler beetles, Eupoecila australasiae, get their name from the patterns on the body resembling those of a fiddle or violin. They can be found feeding on flower nectar and pollen of flowering gum trees and other native trees, as well as rotting fruit during the summer months. They are active day flyers the females seek out areas where there are rotten wood, mulch or other vegetable compost to lay their eggs which will hatch into curled larvae.

The spotted flower chafer, Neorrhina punctatum, (below) is a related species.

Cowboy beetles, Chondropyga dorsalis, are relatively common in Eastern Australia. Found in dry forests, woodlands and suburban areas, they are most common in coastal areas. These orange- brown to mid brown beetles have a wide black stripe down the middle of the thorax and abdomen, the patterns are variable in shape and size. Females are slightly larger than the males and the adults emerge from their pupal cell in early summer in all the eastern states and territories.

An Australian native, the commonly named cowboy beetle, is a species of scarab beetle. They are not dangerous and not even considered as pests. The larvae feed on dead and decaying wood and the adults feed on nectar.

We often are asked to identify the grubs and adults of this common native beetle.

In a plant pot this species at the grub stage of its life cycle will cause growth reduction to your plants as they will eat the roots and are quite destructive. The Female adult beetles are attracted to the organic matter in the potting mix and will lay her eggs there. The eggs will pupate underground. The large white C shaped grubs will then feed on decaying wood using strong mouth parts on its tiny orange head.

In a garden bed this would be fine, but in a pot, these grubs eat all the food supply and then start on the roots. You will notice the soil in pot will looked turned up. In terms of control, If the pots are of a convenient size, tip all the plant contents out onto a large plastic sheet or tray. Save aside all the plants in a pile. Then sort through the soil and pick out all the grubs (release them to a section of your yard allowing them to emerge as beetles). Replace everything back into the pot and replant. You will be amazed in the sudden growth as the grubs will have broken down all the potting mix, making it ideal plant food and now the plant roots can grow again.

Eucalyptus tortoise beetle, Paropis maculate feed on eucalypt leaves both as larva and adults. Their name comes from the behaviour of pulling in their antennae if threatened and their shape.

Plague soldier beetles, Chauliognathus lugubris, gather in enourmaous numbers during late summer to participate in mating aggregations. Their numbers can be so large that their combined weight may be enough to break off small branches from the flowering shrubs.

They are found in a range of coastal habitats such as dry forests, woodlands, shrublands and suburban gardens. The adults feed on pollen, nectar and small insects. Soldier beetles are closely related to fireflies and lycid beetles, both of which have many species that produce poisionous chemicals.

The Feather-horned Beetle, Rhipicera femorata, is a rather uncommon, tiny species of beetle of which very little is known about its biology.

Adults range in size from 10-25 millimetres in length and are easily recognised by their over-sized fan-like antennae.

The males differ from the females in that their anntenae are much larger and more pronounced. The anntenae are unique due to the fact that they have more than 20 segments and arise from small knob-like prominences. 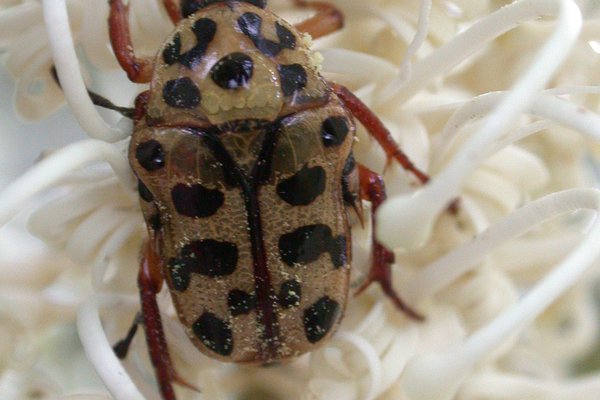 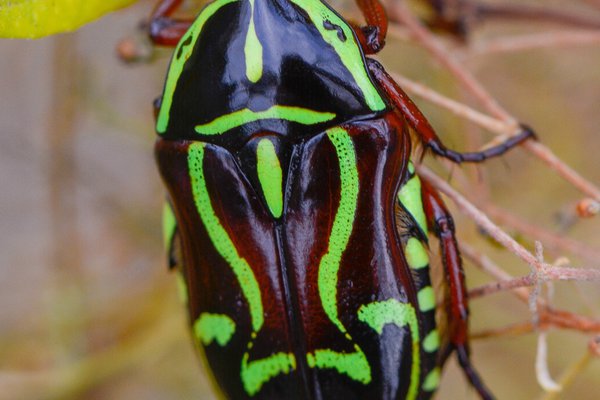