Starting in the 1920s in Sydney, First Nations political movements have been fought across generations, with consistent calls for land rights, self-determination, and equality occurring for more than 90 years.

Although there have been many wins in the resistance campaigns, Aboriginal and Torres Strait Islander peoples have historically been denied influence over policy making, resulting in them being the most socioeconomically disadvantaged peoples in Australian society, and still vulnerable to systematic discriminatory practices.

Why, after decades of petitions, embassies, rallies, protests, campaigns, negotiations, research, Royal Commissions, does Australia not listen to the evidence? First Nations peoples are still often excluded from the decision making processes. Until there is real change that includes First Nations agency, resistance will continue.

The Unsettled exhibition features a collage of selected graphics and images that illustrate protest to certain government agendas. The Yirrkala Bark Petition 1963; The Freedom Ride 1965; Aboriginal Tent Embassy 1972-present; Redfern Tent Embassy 2014; The Larrakia Petition 1972; The Statement from the Heart 2017; The Right Wrongs Write Yes! for Aborigines on May 27 poster for the 1967 Referendum; The Barunga Statement 1988; “Prime Minister Gough Whitlam pours soil into the hands of traditional owner Vincent Lingiari, Northern Territory” photograph by Mervyn Bishop 1975; Protest photographs by Aunty Barbara McGrady “Close the Gap, not communities” 2015, Solidarity for the “Black Lives Matter” movement at the Block Redfern 2014, and Justice for TJ Hickey Rally 2013.

The Australian Aboriginal Progressive Association (AAPA) was formed in 1924 in Sydney and is recognised as the country’s first politically organised First Nations activist group. Worimi man Fred Maynard was the president of AAPA in the 1920s. The AAPA established a clear agenda for Indigenous rights and governance, demanding land for every Aboriginal family and an Aboriginal board. The AAPA supported and represented families and people who had suffered illegal child removals, sexual assault cases, and numerous other human rights violations by the government or those working for them.

Long before the Uluru Statement from the Heart in 2017, Aboriginal peoples have called for self-determination and for a representative voice in government. In 1933 at the “Blacks Camp” at Salt Pan Creek in Sydney, King Burraga (also known as Joe Anderson) gave a nationwide address in a news broadcast to the Australian public, becoming one of the first Aboriginal people to use film to voice demands for recognition of Aboriginal rights. He stated: “All the black man wants is representation in Federal Parliament”. He also addressed issues of black and white inequality, saying “there are plenty of fish in the river for us all and land to grow all we want.”

Of all the Commonwealth Charter signatory nations, Australia is the only country that commemorates the invasion and beginning of colonisation as a national day of celebration.

Aboriginal people have continually protested these celebrations which are viewed as offensive and in poor taste when considered as part of the lived legacy of invasion. This legacy has resulted in racism, over-incarceration, lower life expectancy, discrimination, and implicit bias, impacting on First Nations peoples today.

Australia Day for many First Nations peoples is instead called Invasion Day, Survival Day, or Day of Mourning.

Aborigines Day of Mourning 1938
Reproduction of a 1938 newspaper clipping.
Image courtesy of the State Library of New South Wales.

WE, representing THE ABORIGINES OF AUSTRALIA, assembled in conference at the Australian Hall, Sydney, on the 26th day of January 1938, this being the 150th Anniversary of the Whiteman’s seizure of our country, HEREBY MAKE PROTEST against the callous treatment of our people by the whitemen during the past 150 years, AND WE APPEAL to the Australian nation of today to make new laws for the education and care of Aborigines, and we ask for a new policy which will raise our people to FULL CITIZEN STATUS and EQUALITY WITHIN THE COMMUNITY. Endorsed resolution at the Day of Mourning gathering on 26th January, 1938. 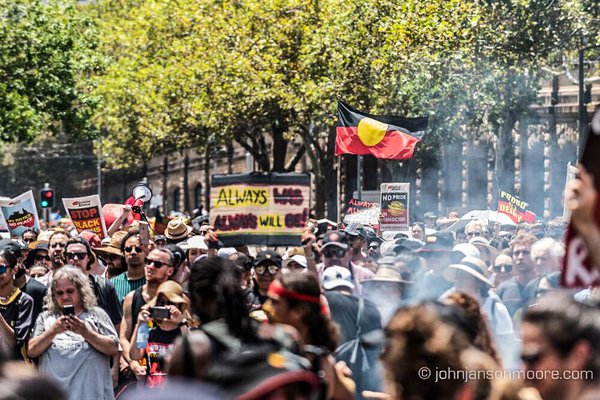 By Jacinta Koolmatrie
Read more
Back to top
You have reached the end of the page. Thank you for reading.