Harriet was born in 1804 in Sydney, New South Wales to Richard Calcott, an ex-convict sent to Sydney in 1799 for stealing, and his de facto wife Catherine White, a free settler.

Catherine died in 1820, and soon after Harriet gave birth to her first child Mary Ann King, daughter of Ensign Edward King. Her second daughter, born in 1823, was Frances Murdoch Stirling, child of Lieutenant Robert Stirling, who worked for Governor Sir Thomas Brisbane. Stirling was killed by pirates while at sea, some time around 1829.

Harriet is mentioned in the 1828 census as living with her sister Louisa and father in Gloucester Street Sydney and employed as a ‘sempstress’. Harriet was introduced to AW Scott by his brother Robert, with whom she was friends, in 1829. At the time, she was still working as a seamstress and supporting herself and her children. In 1830 she and Scott had daughter Harriet, followed by Helena in 1832.

In 1831, Richard Calcott died and Harriet moved with her three daughters and sister Lousia to a house in Harrington Street. It is likely that her fourth daughter Helena was born here. At this time, AW Scott, father to her younger children, settled on Ash Island in the Hunter River near Hexham. The intricacies of their relationship are not known, but contact was obviously maintained between them. They finally married in 1846, and the whole family moved to Ash Island.

There is little mention of her in family records, although her domestic support provided AW Scott, Helen and Harriet with the freedom to research and produce the Australian Lepidoptera and their Transformations. No image of her survives. 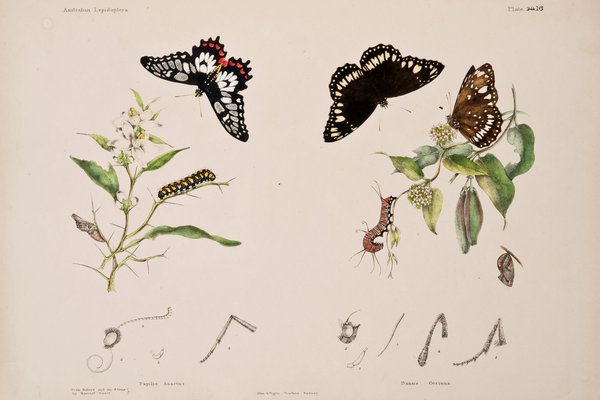 Australian Lepidoptera and their Transformations, Volume 2

Australian Lepidoptera and their Transformations, Volume 1