Adult male Blainville's Beaked Whales are usually heavily scarred on the head and flanks by parallel linear tooth-rakes, apparently inflicted by other males in within-species combat. The head can be brownish, shading to grey on the edges of the upper lip and lower jaw. Males are darker than females.

The body is deep and laterally compressed, particularly towards the tail. The melon is small and flat. The beak is tubular, thick, and moderately long. The mouthline is distinctive in this species, rising steeply about halfway along its length. This is particularly obvious in adult males; the sharp upwards slope of the lower jaw coinciding with the position of the massive teeth. The single pair of teeth are very large (up to 20cm in height), angled forward at about 45°, and raised above the upper jaw. The teeth are mostly hidden within the deep tooth sockets, or covered by gum tissue. Only the tip of each tooth is exposed. It has a strong terminal denticle and is often covered by large, stalked barnacles. These teeth do not erupt in females. The prominent triangular or hooked dorsal fin is positioned far back on the body, between 60% and 70% of the distance from the beak to the tail.

The colouration, extensive scarring and head form of adult males can help in the identification of this species at sea. The arched curve of the lower jaw of males is much more extensive than in Andrews' Beaked Whale and the Ginkgo-toothed Beaked Whale. Males of the latter two species also have large teeth set near the middle of the lower jaw.

Groups have been observed regularly off Oahu, Hawaii and in the northeastern Bahamas, often in waters 500m - 1000m deep.

Blainville's Beaked Whales are found in tropical and warm temperate waters worldwide. There may be some incursions into higher latitudes related to warm current systems. They appear less shy of boats than some other beaked whales. Strandings have occurred throughout their range, including the northern and southern Australian coasts to as far south as 41°S. Three strandings have also occurred in northern New Zealand.

Blainville's Beaked Whales are thought to feed on squid and deep-sea fish, and possibly crustaceans and echinoderms (sea urchins and starfish) found on the sea floor. Because they lack functional teeth (i.e. for grasping and biting prey), they presumably capture most of their prey by suction.

Blainville's Beaked Whales are often observed in small groups; there have been sightings of groups of 3-7 animals off Hawaii. When surfacing, the beak and melon of the whale appear first, followed by the back and the fin. Surfacing is slow, with little splashing. The blow is indistinct and the flukes are not exposed when the animal dives. Deep dives can last 45 minutes. They have been taken opportunistically in hunts for small cetaceans, but have not been subjected to targeted hunting. Some mass strandings in the Bahamas have been attributed to acoustic trauma as a result of nearby naval exercises.

Nothing is known about breeding in Blainville's Beaked Whales. 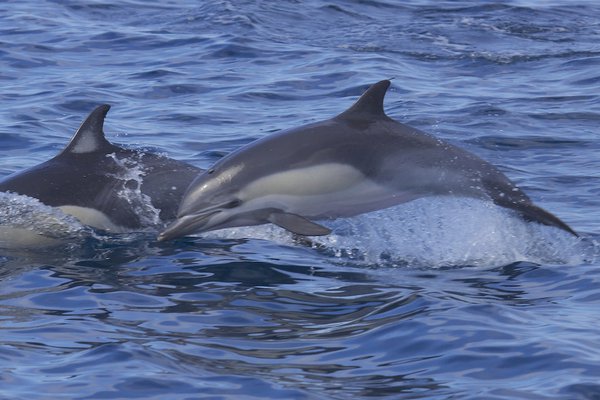 Mesoplodon mirus
Discover more
Back to top
You have reached the end of the page. Thank you for reading.